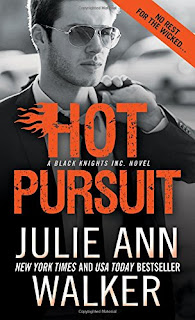 HOT PURSUIT – Julie Ann Walker
A Black Knights Inc. Novel, Book 11
Sourcebooks Casablanca
ISBN-13:  978-1-492-60884-4
October 2017
Romantic Suspense
England – Present Day
Six years ago, SAS agent Christian Watson was captured and tortured in Kirkuk, Iraq.  Getting him rescued from Iraq led to more deaths and an international incident.  Six months later Christian was let go from the SAS and eventually made his way to Chicago and the Black Knights.  The Black Knights is a black ops group of covert operators financed by the past President of the United States.  With a motorcycle repair company as a front, Christian and four other operatives are trying to return to Chicago after capturing the money launderer for Spider, whom they have been after for a long time.
The other operatives with Christian are Colby “Ace” Ventura, former U.S. Navy pilot, Jamin “Angel” Agassi, a former Israeli Mossad agent, and Rusty Parker, a civilian whom they contacted as a charter boat captain, and Emily Scott is along as the office manager from Black Knights to keep everyone organized, on task, and out of trouble.  While staying at a small cottage before flying back to Chicago, there is a knock on the front door and they open it to find a horde of reporters asking if Christian is the SAS in the Kirkuk Police Station Incident.  How can they get out of the cottage with reporters all over, as they need to make their flight?
Since the first day Christian walked in the door at Black Knights, Emily has lusted after Christian.  The only way to control herself is teasing, criticizing, and putting Christian down.  But hearing him shouting during a nightmare of the Kirkuk incident starts the walls between them falling, even though she tries her hardest to resist his English charm.
Ace and Rusty are on the edge of a relationship, but while Ace is out as a gay man, Rusty is still in the closet because of his family.  Vibes simmer between them, but Ace is determined not to be with someone who denies his inner self and what he is.
Julie Ann Walker will immerse you in the Black Knights world as they are trying to escape from the reporters and another two men who hold Christian responsible for their brother’s death in Kirkuk.  Christian and Emily have feelings for each other, but Emily keeps trying to deny them, and Christian is determined to get under Emily’s skin and let the fire she has inside for him go free.
The secondary characters are Ace, Angel and Rusty, members of the Black Knights group.  Lawrence and Ben Michelson are constables, or policemen, in Cornwall, and when the news about Christian appears on the television, Lawrence is determined to make him pay for what happened to his brother all those years ago.
HOT PURSUIT will introduce you to some of the Black Knights and its operatives.  There are ten other stories in the series, and while I haven’t read any of the others, it was easy for me to follow along with HOT PURSUIT.  With suspense and tension, it was a delight to follow Christian and Emily as she tries to fight her feelings and Christian doing everything to tease and taunt her into his arms.  Enjoy a night of great reading and get HOT PURSUIT this month.
Carolyn Crisher 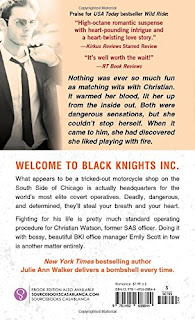 
Welcome to Black Knights Inc.
What appears to be a tricked-out motorcycle shop on the South Side of Chicago is actually headquarters for the world's most elite covert operatives. Deadly, dangerous, and determined, they'll steal your breath and your heart.

Fighting for his life is pretty much standard operating procedure for Christian Watson, former SAS Officer. Doing it with bossy, beautiful BKI office manager Emily Scott in tow is another matter entirely. 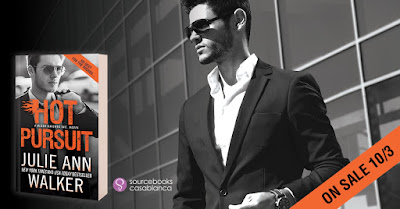 What was he doing?
What the bloody hell was he doing?
Emily didn’t realize it, but all her acts of caring, her selfless moments of kindness—from waking him from his nightmare to pulling him into the cab of the pickup truck—had torn open his chest, ripped out his heart, and served it up on a platter.
Then, when she had stepped in front of him, ready to take a bullet that was bloody well meant for him, he had stopped pretending that what he felt for her was lust mixed with a heavy dose of vexation. Stopped pretending that he wasn’t completely arse over teakettle about everything she did, everything she said. Each smile. Each laugh. Each witty quip.
In that moment, he had known. Heart. On. A. Platter.
All she had to do was take it.
Unfortunately, he was the one taking.
Taking a kiss she hadn’t granted. Taking a taste she didn’t return. Taking advantage of a beastly situation.
Had he lost his mind? Had he forgotten the unwritten rule? The one that was bold, underlined, and all in caps?
Not to mention, he’d lost control of himself, of the moment. He blamed it on the memory of Emily in that bastard’s grip. The sight of her there—a pistol to her head, her eyes wide with fear, but her jaw gritted tight because she refused to give in to it—was forever tattooed onto the backs of his eyelids. He knew he’d see it when he closed his eyes at night.
It took effort, but he ripped his mouth away from Emily’s and dropped his hands. Curling his fingers into fists, he locked his jaw until his molars begged for mercy.
“Whaaa?” She blinked up at him through the rain in confusion.
“Sorry.” He ground out. The word was guttural. Hard. “I shouldn’t have…” He shook his head, water flying from the ends of his hair. “Just…sorry, okay?”
Her mouth opened in a bewildered little O. That mouth that tasted like mint toothpaste with a lingering hint of buttered toast. His favorite flavor used to be Welsh cakes, but now it was Emily. Emily and her mint toothpaste with lingering hints of buttered toast.
“That won’t happen again,” he assured her before grabbing her hand and towing her toward the others.
He had thought for sure the man in the black pants and the white shirt was dead. Ben’s shot looked as if it had drilled the bloke directly in the heart. Which meant Christian felt like a total prat for stopping to ask Emily why she had stepped in front of him—for stopping to kiss her—when they arrived in time to hear the decidedly alive man whisper his name. “Philippe Dubois.”
“You’re Boss’s friend,” Ace said, applying pressure to Philippe’s wound. “You’re the former Armée de L’Air commandant.”
“Oui. C’est moi,” Philippe managed, water dripping from his chin and earlobes. He wasn’t wheezing. That was good. Meant the bullet hadn’t collapsed his lung.
“Don’t try to talk, Philippe,” Ace told him. “Rusty, call airport security.”
Christian was already pulling his mobile from his soaking hip pocket. The rain had let up. No longer a deluge, it was now more of a steady drip. “We don’t need security. We need an ambulance. This man needs to go to hospital.”
He dialed 999 without hesitation and waited for his call to connect. Dropping his free hand back to his side, he was startled when Emily grabbed it, threading her fingers through his. They felt dainty, delicate. And freezing wet. He desperately wanted to kiss them warmer, kiss them dry.
Glancing at her, he blinked the water from his lashes but couldn’t stop the questions in his eyes. So you forgive me? For taking without asking? For kissing you when you’ve given me no indication you were interested?
Before she could answer, an operator’s voice sounded in his ear, all efficient and bored. After explaining the nature of Philippe’s wound and what had happened in the vaguest of terms, he gave the operator their location. When she asked for his name, he growled, “That’s not what’s bloody important. What’s bloody important is a man’s been shot and needs help. Hurry!” He abruptly hung up. “Help is on the way,” he announced.
Philippe’s white shirt was soaked with blood despite the pressure Ace applied.
“Damnit,” Christian growled, looking around for something to stanch the bleeding. Nothing else for it, he decided, dropping Emily’s hand—he really, truly hated doing that—and shrugging out of his coat. Next came his sweater. He tossed both pieces of clothing to her.
His white cotton undershirt was wet and sticking to his skin, but it would have to do.