Promo: ON THE CHASE by KATIE RUGGLE 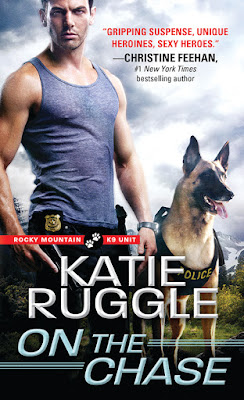 Injured in the line of duty,
His orders are simple:
Stay alive.
But when a frightened woman bursts into his life, Hugh and his K9 companion have no choice but to risk everything to keep her safe.

The sole witness to a horrific crime, Kaylee Ramay flees to the Colorado Rockies to start a new life. There she becomes Grace, a dog kennel employee desperately trying to avoid attention—especially from dangerously attractive K9 Officer Hugh Murdoch.

Because Hugh is tall, dark…and nothing but trouble.

Hugh is anxious to get back in the field after an act of heroism left him warming the bench. Until then, he and his K9 partner Lexi spend their hours teasing the town’s mysterious newcomer. But when their simmering attraction is nearly cut short by a sniper’s bullet, Hugh’s mystery woman must come clean about the secrets she keeps…

Or both of them will pay the price. 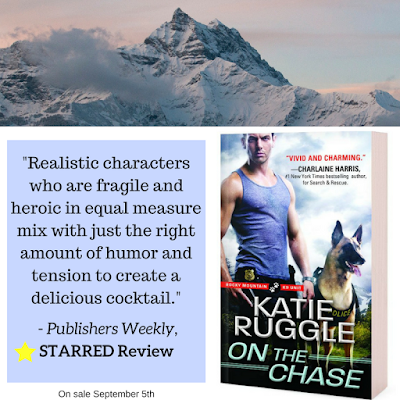 
The floor in the entry creaked, reminding Grace of her most urgent issue at the moment: someone was in the house. As quietly as possible, she started backing up. This was not a good room to be trapped in. The only door was the one into the hallway—where the intruder was. The large, central window was solid. The two smaller panes of glass beside it would reluctantly crank out a few inches, but definitely not wide enough to fit her entire body through.
Why had she hesitated when she first heard the knock? If she’d immediately headed for the back door, she’d already be far, far away. Now she was stuck.
Her gaze ran over the room, searching for hiding spots, but there weren’t any good ones. The closet was too obvious, but it would have to do. Maybe they wouldn’t bother searching.
As she hurried toward the small closet door, her heart thumped painfully against her ribs. It beat so loudly that it felt as if everyone still left in Monroe could hear the pounding.
“What are you doing?”
She whipped around, grabbing the first thing within reach to use as a weapon.
Hugh looked from her face to her hand with his usual expression of barely contained amusement—a look that aggravated Grace more every time she encountered him. Even the dog standing next to him looked entertained. “The mute button doesn’t work on me. Trust me. Others have tried.”
There was still so much residual fear flooding through her body that Grace had a hard time understanding what he meant. She followed his gaze to the improvised weapon in her hand and realized that she was pointing the television remote at him. As her panic started to abate, anger took its place, along with a healthy dose of embarrassment.
“What are you doing here?” she demanded, allowing her arm to drop back to her side.
“I could ask you the same thing,” he said.
“What?” It was almost a screech. Grace blamed residual nerves…and the fact that Hugh was truly aggravating. “I live here!”
“Jules said you were job hunting today.” She opened her mouth, but he spoke again before she could ask how that justified him breaking into her house. “Why didn’t you open the door when I knocked?”
Her eyes narrowed. “You came in because you thought I wasn’t here? What were you going to do? Go through my stuff?”
The guilty look that flashed over his face disappeared quickly, but she still caught it. “You were!” Another thought occurred to her, and she almost growled. “How did you get in?”
His expression of pure innocence just made her suspicions double. “What do you mean? The door was unlocked.”
“No, it wasn’t. I definitely remember locking—”
“Hey!” he interrupted, his attention on the TV screen. “Is this the Tattered Hearts where Tatiana realizes that Natasha and Jorge are scheming against her?”
“What? I don’t know. I’ve never watched this show.”
“You’ve never seen Tattered Hearts?” He grabbed her hand and pulled her to the couch. Bemused by the sudden topic shift, she sat. “You are missing out. It’s the best show ever.”
Hugh plopped his oversized self on the couch right next to Grace, jostling her. He was so big, a wall of heat and muscle and sexiness—whoa. She shut down that thought abruptly. His dog stretched out in front of them, her furry head resting on Grace’s foot, which was comforting and kind of nice. She scowled and briefly considered telling Hugh to leave—although the dog could stay—but Grace was curious why he was so obsessed with this soap. Besides, as annoying as Hugh could be, arguing with him kept her mind off Martin Jovanovic. She honestly didn’t want to be in this big, creaky house alone anymore, especially after having the snot scared out of her, so she settled in to watch.
“Wait,” she said after a few minutes. “So the guy with the waxed chest—”
“Jorge.”
“So Jorge is cheating on the woman with the scary eyebrows—”
“Tatiana.”
“Jorge is cheating on Tatiana with the lizard-faced woman?”
“Natasha.”
“Why?” Keeping her gaze locked on the television, Grace made a face. “Tatiana is so much hotter, and Natasha is all about the drama. That gets so tiring.”
“I know.” Hugh sighed. “Jorge’s an idiot.”
“Yeah. He is.” Although she wanted to talk more about Jorge’s poor life choices, Grace went quiet so she could watch the show. As the soap continued, she found herself leaning forward, fascinated despite herself.
“Oh. My. God.” Grace clapped a hand over her mouth in shocked glee as a commercial filled the small screen. “Did Tatiana actually tell Jorge about the secret baby?”
“I know, right? Natasha knew all along, too.” Hugh shook his head and tsked. “Just wait. Javier—”
“Stop! No spoilers!” Lunging toward him and laughing, Grace clapped a hand over his mouth. As soon as she made contact, she froze. His skin was warm—almost hot—and his cheeks as stubbly as his lips were smooth. Grace stared at him. What was she doing? This was Hugh, a cop who was so suspicious of her that he’d broken into her house to dig through her things. Why was she flirting with him?
Realizing that she was still touching him, Grace started to yank her arm back, but he caught her hand before she could pull it away. He gave it a gentle squeeze before releasing it.
“What—”
“The show’s on,” Hugh interrupted. “Hush, or you’ll miss it.”
Watching Tattered Hearts was more important than smacking him down for shushing her, so Grace settled against the sofa cushions and tried to ignore the annoying, muscle-bound cop sharing the couch with her. She couldn’t deny how nice it was to have him there, though. It made her feel a little less alone.


Grace felt herself relaxing for the first time in over a week. With a relieved sigh, she let herself enjoy the warmth of Hugh’s shoulder so close to hers and the comfort of his presence. She got caught up in the drama of Tatiana, Jorge, and Natasha, and forgot about anyone with the name Jovanovic for a little while.
at September 01, 2017