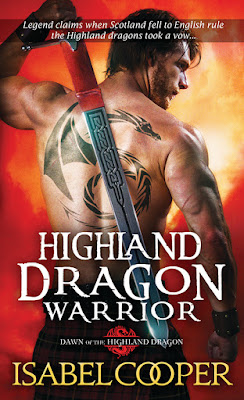 
“The mix of hard-headed realism and fantasy in this novel is enchanting...”—ELOISA JAMES for Barnes and Noble Reviews for Legend of the Highland Dragon

Legend claims
When Scotland fell to English rule
The Highland dragons took a vow:
Freedom at any price.

The war may be over, but so long as English magic controls the Highlands, not even a dragon laird can keep his clan safe. What Cathal MacAlasdair needs is a warrior fierce enough to risk everything, yet gifted enough to outwit an enemy more monster than man.

What he needs is Sophia.

Alchemist Sophia Metzger traveled to Loch Arach in search of knowledge. She never dreamed she’d learn to do battle, ride through the stars on the back of a dragon, or catch the eye of a Highland laird. But as her quest turns to sizzling chemistry and inescapable danger, she’ll soon discover the thrill of being caught in a dragon’s claws..

During the day, ISABEL COOPER maintains her guise as a mild-mannered project manager in legal publishing. In her spare time, she enjoys video games, ballroom dancing, various geeky hobbies, and figuring out what wine goes best with leftover egg rolls. Cooper lives with two thriving houseplants in Boston, Massachusetts. 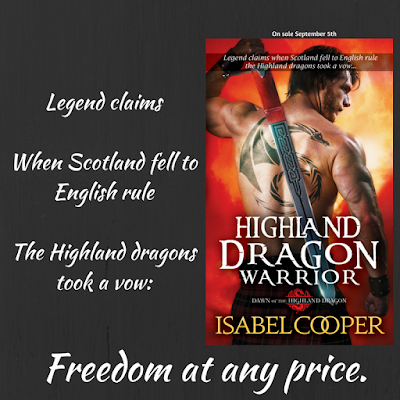 
He kissed her as if by sheer force he could make them both forget what waited, as though with his lips and tongue and his hands on her breasts he could himself cast a spell to banish Valerius to whatever hell would claim him in the end. He drank Sophia’s little gasps of desire like the strongest wine and wanted nothing more than to hear those sounds, to feel her fingers twined in his hair, to think of nothing else, to think nothing at all.
Promo Spotlight; Blog Tour Stop