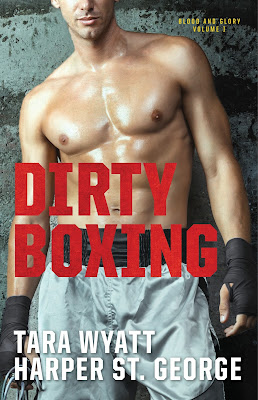 “St. George (A Marriage Deal with the Outlaw) and Wyatt (Necessary Work) have written a fast-paced romance filled with sizzling chemistry, which will have readers rooting for Jules and Nick to find their way back to each other. Verdict: This novel will have broad appeal for readers of sexy contemporary romance, not just those who have an interest in MMA.”
—Library Journal

After an unstable childhood, Jules Darcy is very familiar with the risks of falling in love. And as an adult, she’s never let herself forget just how high those stakes can be. That’s why she ran away a year ago after her fling with MMA fighter Nick Giannakis quickly got serious. But when she jumps at the opportunity to reconnect with her dad by accepting a job with his growing fight league, she’s stunned to learn the abs, the chiseled arms, and the rock-solid punches she has to market belong to none other than her former fling. Unable to run away from the sexy middleweight this time, Jules vows to keep things strictly professional. But one look at Nick, and her resolve starts to crumble….

The last thing Nick expects when he signs with the prestigious World Fighting Championship is that he’ll have to work with the only woman who ever broke his heart. Desperate to hide the pain she caused him, Nick vows to keep his distance from his gorgeous ex. But when he realizes their intense chemistry hasn’t faded after a year apart, he wonders if they could have a future together, even if dating the boss’s daughter could complicate his bid for the championship belt.

Under the bright lights of Las Vegas, in the world of high-stakes prize fighting, they’ll have to take a risk and decide if their love is worth fighting for.

Harper St. George was raised in rural Alabama and along the tranquil coast of northwest Florida. It was a setting filled with stories of the old days and it instilled in her a love of history, romance, and adventure. By high school, she had discovered the romance novel, which combined all of those elements into one perfect package. She has been hooked ever since. She currently lives on Florida’s Emerald Coast with her family and loves to connect with readers. She would love to hear from you. Please visit her website at HarperStGeorge.com or connect with her on Facebook at Facebook.com/HarperStGeorge.

Tara Wyatt is a contemporary romance and romantic suspense author who has won several awards, including the Unpublished Winter Rose, the Linda Howard Award of Excellence, and the Heart of the West. A librarian by day and romance writer by night, Tara lives in Hamilton, Ontario with the world’s cutest dog and a husband who makes all of her heroes look like chumps. Find her at Tara-Wyatt.com.


Blood and Glory Giveaway:
To celebrate the first in the Blood and Glory Series, we’re giving away one promo code for a download of DIRTY BOXING! Please check the following participating sites to enter to win, but keep in mind you can only win once!

The team working on the photo shoot had converted a corner of the WFC gym so they’d have access to punching bags and other training accessories they might need, which meant they were shooting at night when everyone was gone. Which was fine, except Jules wished there were more people around to keep her attention off Nick. But then she thought of what had happened at the club and realized a room full of people couldn’t save her from wanting him.
The music that had been playing while they were shooting changed from a dance beat to Beyoncé’s “Single Ladies.” With a sigh of frustration at herself for still being hung up on him, she plastered on a smile and walked to where Nick stood, determined to face her demon head-on. He adjusted one of the giant wind machines an assistant had set up at the beginning of the shoot, fiddling with the dial on top. Krista, the make-up artist, had gone back to her table of supplies.
“You’re doing great. Enrique is very happy with what we’re getting. Thanks again for doing this,” she said, crossing her arms over her chest, trying not to think of where her
hands had been a week ago.
His trademark cocky smile appeared, the one where one side of his mouth tipped up higher than the other, but he didn’t look at her. She swallowed hard when her tummy fluttered in response. “Did you doubt me?” he asked, and turned the fan on.
“No . . .” She automatically started to reassure him, but stopped when he tossed his hair dramatically, the thick dark strands catching the wind and blowing out behind him. She caught a faint whiff of the citrus scent of his shampoo. It was the same scent she’d worn on her skin after spending the night with him back in Chicago.
He moved his shoulders and hips in time with the music as he tossed his head again. She couldn’t help teasing him, laughing a little. “Are you pretending to be Beyoncé?”
Looking over his shoulder at her, he winked. “Everyone secretly wants to be Beyoncé.”
She laughed harder, not even bothering to restrain it. As she watched him toss his hair like Beyoncé, bare chested with his hands still in fight wraps, she realized just how much she’d missed him. Missed this playfulness. Missed the way he could make her laugh when she was stressed. After that disastrous dinner with her dad last week, things had been very tense between them. He only spoke to her when he had to, and avoided her the rest of the time. Laughing with Nick was nice and made her forget that for a few minutes.
“I wouldn’t mind being Beyoncé,” she agreed when she finally stopped laughing. “But you should stop playing with the wind machine. It looks expensive.”
“Nuh-uh.” He grabbed her hand when she reached for the dial and pulled her in front of him, facing the wind. “Just try it.”
“What? No.” But she’d started laughing again.
“Just try. Here.” He gently nudged her feet apart. “Power stance,” he explained. “Now close your eyes and toss your head.” His hands went to her shoulders to pull them back before sliding down her arms to take her hands, leaving her skin tingling. She couldn’t stop her fingers from curling around his, craving more of his touch.
Spreading her arms out, he made her dance while singing, “All the single ladies,” softly in her ear. His lips brushed the shell of her ear, and his breath sent prickles of heat down her neck. The hard muscles of his chest were solid and warm against her back.
At one time she would’ve turned and kissed him, but that part of their relationship had to stay in the past. With his chest pressing into her back, though, it was hard to remember exactly why. Before Jules realized it, she was playing his game, swaying and shaking her hips to the music. She had to resist the urge to press herself against him every time her butt brushed his hips, reminding herself for the hundredth time that they were just coworkers.