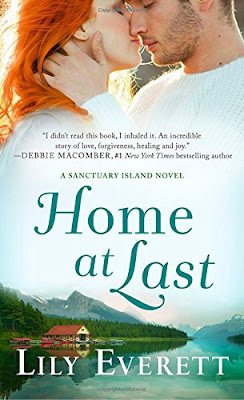 Home is where the heart is…
In Lily Everett's Home at Last, Marcus Beckett left Sanctuary Island after his mother’s funeral, and he hasn’t been back since. Until now. Needing a change from the high-risk, high-stakes life of a bodyguard, Marcus makes a solitary life for himself running the neighborhood bar in his hometown. His only mistake? Seducing and then dumping the town’s sweetheart, Quinn Harper. Marcus knows he did the right thing―a good girl like Quinn has no business with a broken man like him. But now no one will come to his bar, and he’s watching his last chance at a peaceful life go up in smoke. So when Quinn proposes a fake four-week courtship, he can’t refuse…even though he knows it’s a bad idea.
It’s a romantic charade that will buy Quinn time to distract her mother and father from their own marital problems―and will help Marcus welcome back some paying customers besides. But what begins as an engagement of convenience slowly transforms into a deeper connection, one that heals both of their hearts. . .and ignites the simmering passion between them. Could it be that pretending to be together is just what Quinn and Marcus needed to give their real love a second chance?
"Heartwarming, emotional, extremely romantic...Enjoy your trip to Sanctuary Island! I guarantee you won't want to leave."―Bella Andre, New York Times bestselling author

HOME AT LAST - Lily Everett Sanctuary Island - Book 6 St. Martin's ISBN:  978-1-250-07406-5 March 2017 Contemporary Romance Sanctuary Island, North Carolina - Present Day Former secret service agent Marcus Beckett grew up on Sanctuary Island, but, still, he remains a hometown outcast after seducing, and then leaving, the town's sweetheart, Quinn Harper.  Marcus has come home and opened a tavern, The Buttercup Inn, but he's in danger of losing his new enterprise for lack of customers, i.e. sales.  Enter Quinn and her exuberant idea of a fake four-week engagement to save her parent's failing marriage.  Quinn's logic:  If her parent's believe that she's happily engaged to marry Marcus, they will reconcile; and, if the townspeople believe Marcus and Quinn are once again a couple, Marcus's business will recover. Marcus and Quinn are still in love with each other, but they are each so locked into their personal feelings that it is difficult for them to cross through the hurts and fears from the past.  Marcus wants more than anything to save his failing business, and if pretending a fake relationship with Quinn can help, then he's game to try.  Quinn wants to prove to Marcus that she is all grown up and not the same naive teenager he left behind.  Overshadowing all this is her parents' marriage troubles and the relationship expert her mother has hired, Dr. Ron Burkey, whose antics border on the eye-rolling extreme. HOME AT LAST is the sixth book in the Sanctuary Island series; please see the author's website for a list of all the books; www.lilyeverett.com .  Marcus is a serious and brooding man suffering from Post Traumatic Stress Syndrome, which weighs heavily on his psyche.  Quinn has always had a case of hero-worship for the older Marcus, and the two are opposite in many ways; he is the serious one, Quinn is flighty and doesn't settle.  To help her parents, Quinn persuades Marcus to move with her into her parents' home for two weeks so Ron Burkey can study their relationship.  It is during these two weeks that Marcus and Quinn begin to break through the wall of indifference that has held them apart for so long. HOME AT LAST stands alone from the previous books. The secondary characters are delightful, and the problem Quinn's parents face brings to light a little bit of mystery in an interesting side story.  Marcus and Quinn are a delightful pair; don't miss their story. Diana Risso

Great review! I can't wait to read this myself

WOULD LOVE TO WIN. THANKS FOR THE CHANCE.
NATTY'S MAMA