Promo: THE PLAYBOY PRINCE AND THE NANNY by DONNA ALWARD 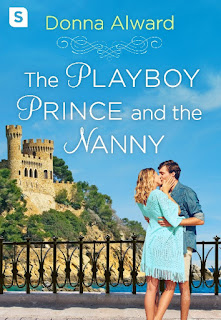 Rose Walters is hired as a nanny for the Crown Prince of Marazur’s children, who recently lost their mother and nanny in a car accident. Rose has worked for others as a trusted nanny for years, and since she is somewhat estranged from her own family, is eager to go overseas and work in Marazur. She once met the younger prince of Marazur, Prince Diego, years ago and wonders if he remembers their exchange, but deep down, she hopes he doesn’t because back then she was literally a beggar. But the first person Rose meets at the royal castle is Prince Diego. He apparently doesn’t remember her, which relieves her worries, but wherever she turns, there he is, ready to step in and help with the children.

Prince Diego is the “spare heir” and, as such, is pretty much able to do what he wants, including getting involved in romantic scandals. With the recent death of his sister-in-law, he offers to step in and assist his brother and father while they cope with the tragedy. He agrees to meet the nanny and help her get acclimated into palace life, but Diego discovers to his shock that he’s intrigued by the demure, but pretty, woman. He then uses excuses to spend time with his niece and nephew—and Rose, their nanny. Diego wants Rose, but he isn’t getting involved with palace help forbidden due to the scandal it’d cause?

Rose is almost like Cinderella as she falls for the prince, but in this case, they’re living in modern times and she’s the nanny. Diego can have any woman he wants—and has indulged in many affairs—but once he meets Rose, he suddenly loses interest in his playboy ways. But first he must win her trust, and hope they can build something together out of the public eye, which is hard to do when the press is tracking your every move. Yet, Rose and Diego do spend time together at the palace, which cements their friendship. But will it lead to something even deeper, like love…and marriage?

THE PLAYBOY PRINCE AND THE NANNY by Donna Alward is the first tale in a two-book series about the two princes of Marazur, with the widowed Crown Prince Raoul’s story next. Rose is British and has been raised to respect the proper manners of help versus employers. Diego would like to throw that convention out the window, but he has to break down Rose’s barriers. Their romance builds slowly…and is sweet, rather than sensual. But just as Rose and Diego are ready to declare their love for each other, a crisis occurs that breaks them apart. Will they find their way back to each other?

This is a romantic tale of sweet love and the prince who finds his commoner bride. Don’t miss THE PLAYBOY PRINCE AND THE NANNY.

Summary:
Prince Diego Navarro is the “spare” to his brother's "heir". While Raoul performs his crown prince duties with the appropriate sense of nobility and poise, Diego’s garnered a bit of a reputation as a playboy - despite the good he does behind the scenes with his favorite charities.

But when tragedy strikes and his sister-in-law is killed in a car accident, Diego knows it's time for the playboy to step up. If not for his brother, then for his niece and nephew, who now find themselves without a mother.

Which is where Rose Walters comes in.

Rose isn't intimidated by money or glitz. The veteran nanny has worked for the rich and minimally famous, but a manor house is no comparison to a castle… or the handsome princes who live there. However, the worst thing she could possibly do is fall for the gorgeous playboy with a surprising heart of gold. He’s a prince; she’s the help. He lives in the tabloids; she loves her privacy. But when her two darling charges start to play matchmaker, Diego and Rose don’t stand a chance.

The Playboy Prince and the Nanny is the first book in Donna Alward's royal duology.

A busy wife and mother of three (two daughters plus the family dog), Donna Alward believes hers is the best job in the world: a combination of stay-at-home mom and romance novelist. Donna loves being back on the East Coast of Canada after nearly twelve years in Alberta where her romance career began, writing about cowboys and the west. She is the author of Somebody Like You, Somebody's Baby, and Someone to Love.

Q:  Where did the idea for the plot come from?
A: The actual plot is a bit of a mashup, really. I wanted to write the stories about the two princes for a long, long time. In fact, I once proposed a version of the story to the Harlequin UK office when the Modern Extra line happened (I wasn’t a good fit. It makes sense now). At first there were no children in the stories, and the heroine was in the country on business… but then at some point it morphed into needing a nanny. It was one of those plots that evolved over time until I was ready to finally sit down and write it.


Q: Who is your favorite character? Why?
A: I really like Stephani. She’s a minor character in this book, and the heroine in the next one. She’s a bit of a mystery, really. Horribly efficient and flies under the radar a bit as Raoul’s Executive Assistant. She also plays fairy godmother to Rose, and I had a lot of fun with that.


Q: Who is your least favorite character? Why?
A: There’s only one character I don’t like, and I’m not telling because that would be a huge spoiler!


Q:  Which is your favorite scene in the book? Why?
A: The fountain in the garden on her first night at the palace. To be honest, when Diego looks down and sees her walking, it reminds me of Captain VonTrapp watching Maria in that oh-so-pivotal scene in The Sound of Music.


Q:  What do you most like to do when you are not writing?
A: Read, knit, walk, yoga…anything that can chip away at my stress level. J

Q:  What's the story behind why and how you became an author?
A: In 2000, I ended up with a horrible case of Post-Partum Depression. About 14 months into my recovery, I was lamenting being “bored” – which had little to do with not having anything to do, and was really about not feeling challenged or inspired. My sister suggested I stop whining and write a book. So I did. And I fell in love with writing again (I have a degree in literature) and never looked back.

Q:  What is your favorite movie? Why?
A: Oh my. Love Actually is one of my faves, but I really have SO many. Just last night I re-watched The American President. I love The Holiday. And Also The Last Holiday and Roman Holiday… hmmm, maybe I just like escapism? (Clearly with a palate cleanser of Sorkin dialogue!)


Q:  Are you thinking of releasing any more books anytime soon?
A: Of course! You can look for a holiday novella on October 3, DECK THE HALLS, which is part of my Darling, VT series, and then the follow up to this release, THE CROWN PRINCE’S BRIDE, is out on January 9.


Q:  Nice cover! What's the inspiration behind it?
A: A Mediterranean destination, a castle, and a little intimacy during the off-hours? Heck yeah!


Q:  If you could travel anywhere in the world, where would it be?
A: EUROPE. Lots of countries in Europe. I want to go on a European Tour (said in poncey accent). Seriously, though, I’d like to see more of the UK, then France, Germany, Italy, Spain… I’ve heard Prague is stunning and then there’s Portugal and Greece…


Q: Which part of the book was the most difficult to write, and why?
A: Actually, it was toward the end, when I had to pull Diego and Rose apart for a short time. It’s hard to keep the tension going when they’re on different continents! Thankfully it wasn’t for very long and Diego had to come home and face the music. J