Promo: LEAVE THE NIGHT ON by LAURA TRENTHAM

Cottonbloom, Louisiana and Mississippi, the Present

Cottonbloom: a town not just divided by the Mississippi river; it’s also divided by demographics. The Mississippi side is the more affluent and considered more refined. The Louisiana inhabitants are of a laboring class dependent on the river and its fishing industry. Relations are not always smooth between the two sides of town.

Miss Sutton Mize is from the Mississippi side where her father is a judge, and she owns an upscale boutique. She is engaged to an attorney, Andrew Tarwater, in partnership with his father. She wants to get her fiancé a special wedding gift. He owns a classic red Camaro that could use some loving care, so she takes it across the river to the Abbott Brothers Garage and Restoration to have the interior done over. She delivers it to Wyatt Abbott whom she knew growing up. Before leaving it there, they discover receipts from high priced out of town restaurants, and, from under the driver’s seat, Wyatt pulls out a sexy black thong with an embroidered red heart on the hip. Sutton is stunned! It is one she special ordered for and sold to her very best friend since childhood, Bree Randall!

Wyatt is sympathetic. He can’t understand why any man could cheat on such a wonderful woman as Sutton—one he’s had a strong crush on for years, but never knew how to get her to fancy him back. Wyatt was rather heavy handed as adolescent males can be, and Sutton always thought he hated her. In her hurt and humiliation, Sutton can see no reason why she can’t get a little revenge on Andrew by pretending to have also had an affair . . . with Wyatt.

Gossip is rife in small towns, and with the rivalry between the halves of Cottonbloom, their friendship certainly raises eyebrows. Not to mention the reaction of her family and his.

This new series is connected to the recent Cottonbloom trilogy: KISS ME THAT WAY, THEN HE KISSED ME, and TILL I KISSED YOU (June, July, and August 2016). However, many new characters are introduced here, especially the large Abbott clan. Wyatt, himself, is only one of the four brothers who share the garage left to them by the recent death of their loved father. There are scores of other relations, including two spinster aunts who came to them when their mother left years ago. Her leaving when he was little messed with Wyatt’s head and heart. Sutton also lacks confidence; though her parents love her and her sister, they are very controlling.

So, both Wyatt’s and Sutton’s backgrounds make it difficult to believe in the other’s affection. Yet Wyatt has an empowering effect on Sutton. He gives her freedom to believe in her dreams and act on them. They also come quickly to believe in their mutual sexual attraction . . . and so will readers!

Ms. Trentham has a definite talent for creating realistic characters—and ones you can love! Wyatt is a jewel, so tender, so considerate, so unselfish. Sutton is likable as well, and it’s a pleasure watching her bloom. As for the storyline . . . it’s a grabber. While it centers on the couple, the other Abbott brothers are intriguing as well. Happily, we can look forward to two or three—or more?—Cottonbloom tales to come. 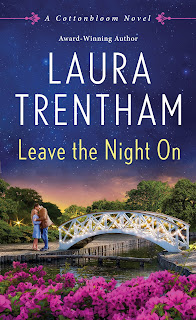 Summary:
Love, betrayal, and sweet revenge—life in Cottonbloom is about to get a whole lot hotter . . .Sutton Mize is known for lavishing attention on the customers who flock to her boutique on the wealthy side of her Mississippi town. So when she finds a lace thong in her fiancé’s classic cherry-red Camaro, she knows just who she sold it to: her own best friend. In an instant, Sutton’s whole world goes up in flames. . .Wyatt Abbott has harbored a crush on Sutton since he was a young kid from the other side of the tracks. He witnessed Sutton’s shocking discovery in the Camaro at his family-owned garage—and it made him angry. What kind of man could take lovely, gorgeous Sutton for granted? But then Sutton comes up with an idea: Why not give her betrothed a taste of his own medicine and pretend that she’s got a lover of her own? Wyatt is more than happy to play the hot-and-heavy boyfriend. But what begins as a fictional affair soon develops into something more real, and more passionate, than either Sutton or Wyatt could have imagined. Could it be that true love has been waiting under the hood all along?

An award-winning author, Laura Trentham was born and raised in a small town in Tennessee. Although, she loved English and reading in high school, she was convinced an English degree equated to starvation. She chose the next most logical major—Chemical Engineering—and worked in a hard hat and steel toed boots for several years.She writes sexy, small town contemporaries and smoking hot Regency historicals. The first two books of her Falcon Football series were named Top Picks by RT Book Reviews magazine. Then He Kissed Me, a Cottonbloom novel, was named as one of Amazon’s best romances of 2016. When not lost in a cozy Southern town or Regency England, she's shuttling kids to soccer, helping with homework, and avoiding the Mt. Everest-sized pile of laundry that is almost as big as the to-be-read pile of books on her nightstand.

Copyright © 2017 by Laura Trentham and reprinted by permission of St. Martin's Paperbacks.