Promo and Q&A with... EMMA DOUGLAS on NEED YOU NOW....and a GIVEAWAY 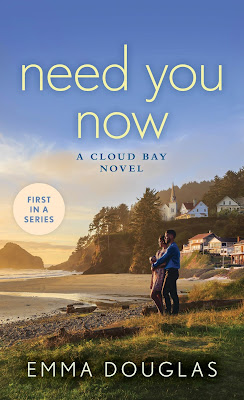 Need You Now is the first book in the Cloud Bay series. It’s set on a small fictional island off the coast of California and the three books are about the three children of Grey Harper, who was the lead singer of Blacklight, one of the biggest rock bands in the world. Need You Now is about Faith Harper, who’s the middle child and firmly set on never marrying after her dad’s bad example and Caleb White who is firmly set on changing her mind once he meets her.

My absolute favorite scene is one that’s a little spoilery but the one that was the most fun to write was early in the book where Faith and her mom, Lou are showing Caleb and Liam around the house that Liam has borrowed on the island (it belongs to one of the other Blacklight members). Lou is a big tennis fan and goes a bit fangirly around Caleb, which Faith finds embarrassing, and only made worse when Lou tries to suggest she should do some fangirling of her own. Mostly because secretly, she’d quite like to. Faith’s kind of a control freak and it’s always fun when you can get that kind of character off-balance.

I make a soundtrack for each book to help get me into the mood of the book. Sometimes I listen to the whole thing and sometimes my writer brain will become obsessed with one particular song for part of the book and I will end up listening to it on endless repeat. Hundreds of times. A big song for the Need You Now soundtrack was Holy Ground by Taylor Swift (Team Taylor all the way!).

I’m influenced by every book I read, I think. Some of my favorite authors are Jennifer Crusie, Kylie Scott, Sarina Bowen, Diana Wynne Jones, Terry Pratchett, Robin McKinley and Lois McMaster Bujold. I’m lucky enough to also be friends with some awesome writers who’ve definitely helped me along with way with critiques and much cheering-on. My awesome crit partners for one (who know who they are so I won’t name them all here) and three writers who I took classes with, or was mentored by, early on (Anne Gracie, Valere Parv and Barbara Samuel/O’Neal) all have made me the writer I am today.

I’m very lucky, all my family and friends are nothing but supportive of my writing even when I go into writer hermit mode around deadline. Not sure my family knows where the writing comes from but they’re happy for me to do something I love.

Reading. Reading all the things. Though sadly, less of all the things than I used to. Diving into a great new book is still my favorite thing in the world. When I’m not doing that, I like crafty things (I knit, do watercolor, crochet a bit, take photos…anything that lets me play with color, really). I love to bake, I’m a wannabe gardener, I play with my kitties and I like to swim or walk. I will also never say no to a good movie or binge watching something great on Netflix.

The second Cloud Bay book A Season Of You is out October 3 and then the third book No Place Like You on December 5. So there won’t be a long wait for the other Harper sibling’s stories.

Welcome to the small island town of Cloud Bay, where it’s never the wrong time to find a love that’s oh-so-right. . .

Caleb White knows what he wants out of life—and being a star tennis player is not it. After speaking to the press about his plans to retire, Caleb decides that a trip to quaint, beautiful Cloud Bay for its legendary music festival is exactly what he needs. There will be time to figure out what to do with his life without a racket in his hand soon enough. Until then, Caleb is content to be stuck on an island with CloudFest’s gorgeous director Faith Harper. . .

The daughter of a famous rock star, Faith knows all about fame, fortune, and hot flings that aren’t meant to last longer than a few good songs. Gorgeous, built Caleb is a temptation she can’t resist, but she’s not prepared for the way he makes her feel. . .and the dreams that they both share. What begins as a carefree distraction deepens into something real. But is Caleb ready to put his celebrity behind him and give life in the slow lane with Faith a chance?

Author Bio:
Emma Douglas would love to live in a world where professional napping was a thing. But until then, she thinks writing books is a pretty awesome alternative. When not writing about imaginary people, she can be found reading, doing something crafty, binge-watching TV, playing her latest song crush on repeat, or singing badly in her car. She lives in Melbourne, Australia in a tiny house stuffed full of books, too many craft supplies and two cats who take up more space than you would expect. Find out more about Emma at www.emmadouglasbooks.com.

Post a comment to be entered in a contest here at RRT Blog to win a copy of NEED YOU NOW by EMMA DOUGLAS.
Open to US mailing addresses only! This is a print copy.

Sounds good. Count me in. Thanks for the chance.

I love small town romances! Thanks for the review!

Sounds like a good book! Another new to me author, love finding them.