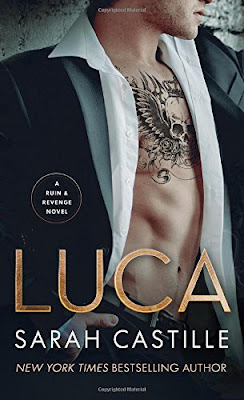 Luca Rizzoli was nearly destroyed by a brutal betrayal that cost him his family. Now a ruthless crime boss in Las Vegas, he lets nothing touch his frozen heart...until a smoldering encounter with a beautiful stranger ignites his passion. One night isn’t enough for a man who takes what he wants―and Luca will do whatever he can to possess his mysterious temptress...
Police detective Gabrielle Fawkes lives for revenge. She lost everything at the hands of an unforgiving ruler of the Vegas underworld. Now she wants to see him six feet under. But when a near-fatal attack leads her into Luca’s arms, what was meant to be one night of unbridled passion becomes something forbiddingly more. Luca has his own agenda, but when strong, determined, kick-ass detective Gaby sets her sights on her target, Luca feels compelled to stand by her side and protect her at all costs. However, pursuing danger comes at a high price―and both Gaby and Luca must work together in order to eliminate the dark enterprise that threatens them, in Luca by Sarah Castille.

Police detective Gabrielle Fawkes’s life has been consumed with bringing down notorious drug lord Jose Gomez Garcia, not only for the drugs he’s illegally bringing into Las Vegas, but for the death of her husband, David. One night, Gabrielle is shot by Garcia’s thugs and brought to the hospital, where she is put into the same room as another gunshot victim, Luca Rizzoli. The man is devastatingly attractive and charming, and he’s soon inviting her to dine at his restaurant. Out of the hospital and recovered, Gabrielle is intrigued enough about Luca to take him up on his offer. But he isn’t just a successful restaurant owner . . . .

Luca is a Mafia crime boss who is as bad as you can get. The restaurant provides a front for his other activities, which includes bribing businesses for “protection” and keeping his sect of the “family” in line with his cousin, Nico, who is head of the family. When Gabrielle shows up at his restaurant, Luca goes after what he wants . . . her. Their sexual attraction is hot and intense, but . . . will it all cool down when he learns she’s a police officer? But Luca comes to her aid when the drug lord comes after Gabrielle again, nearly killing her.

Luca is running a fine line in LUCA by Sarah Castille, as it is forbidden for Mafia members to get involved with the police. After all, law enforcement wants to bring in Mafia members. At first, Luca keeps her occupation secret from his family, and he also tries to shield her from his true business, but she soon learns the truth . . . and is horrified. Yet, by now the sizzling affair between them has them banded together like links of steel. Luca tries to convince Gabrielle that he isn’t as bad as it appears, but when he beats a man in front of her, she isn’t convinced. But he has promised to help her find Garcia, and that is her ultimate goal, even if she has to do it illegally.

As Gabrielle treads the fine line between her superiors and setting her sights on her goal, she’s also dealing with a fellow detective, Jeff Santos, who has suddenly gotten persistent in trying to date her. She is over losing her husband and ready to date, but she doesn’t feel the same about Jeff that he does about her. After Jeff nearly forces himself on her, one of Luca’s goons, who had been assigned with watching her, lures him away by hurling a rock at his car, but loses his cell phone. Jeff is determined to find out who owns the phone, because he wants them to pay for the damage they did to his car. This piece of information soon plays a part in LUCA and may prove a danger to Gabrielle.

As Luca helps Gabrielle search for Garcia, danger lurks and reaches out to them. If Luca has to punish someone to keep Gabrielle safe, he will do so. Their affair continues to sizzle between them and deepens their relationship. But once Garcia is captured (or killed – neither cares which), will they have to confront the realities of their affair, that he’s a Mafia boss and she’s a cop that should be bringing him in?

LUCA is connected to NICO, which came out a few months ago, but one can read this tale without too much difficulty. Nico and his band of “merry” Mafia cohorts make a few appearances, but LUCA is all about the explosive romance between Luca and Gabrielle. If you like your romance sizzling hot and your action burning on the edges, then give LUCA a whirl.

If you're interested in winning a copy of this book...post a comment and I'll announce a winner next weekend. Open to U.S. mailing addresses only.
at August 05, 2017

Wow...definitely an opposites attract story! Thanks for sharing!