Jennifer lives in a small town in Pennsylvania with her husband and two daughters. When not writing, she can usually be found elbow deep in flour or inhaling chlorine as she cheers her daughter on at a swim meet. She loves musicals, caramel and roller coasters, and lists Machu Picchu at the top of her bucket list. She is a member of RWA and is the President of her local chapter, Central Pennsylvania Romance Writers. Find out more about Jennifer and sign up for her newsletter at www.jenniferhoopes.com 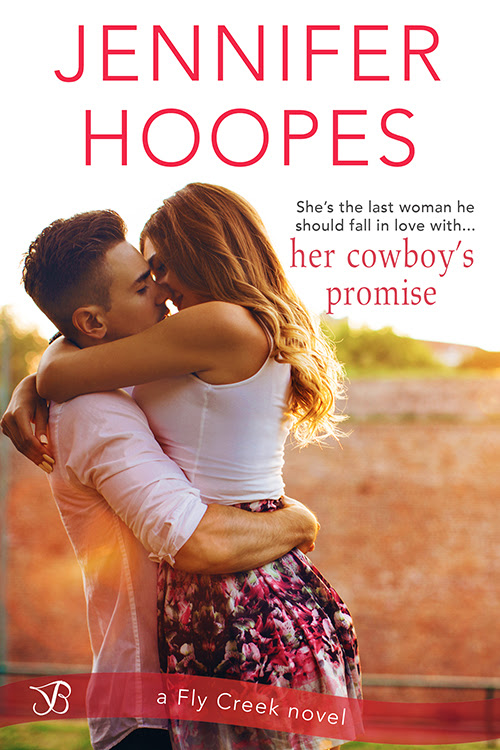 Three years ago, artist Emily White’s grief and survivor’s guilt sent her to the small Wyoming town of Fly Creek. Since then, she’s kept her emotions safely tucked away—until she meets the new rancher at Sky Lake Dude Ranch. Stetson in hand, the gorgeous cowboy’s arrival in her store immediately shakes up her world.

Adam Conley is only in Fly Creek for as long as it takes to fulfill his promise to his late cousin. The small town brings up too many memories of the life he left behind years ago. He knows his task won’t be easy, but the last thing he expects is the instant attraction to the reason he’s in town. Emily is beautiful, vibrant, and completely off-limits. He’s there to keep his promise—not fall in love.

But Adam’s secret will crumble everything Emily’s life has revolved around.


Emily spun on her boot heel and hurried toward the back of the store. She needed him, and that knowing glint in baby blues, out of her space. Even now his gaze warmed her back. And that was a small dash of excitement in a life that until ten minutes ago only encompassed loss and grief. Excitement she didn’t know what to do with.
As her hands wrapped around the brown covered canvas, guilt washed across her body and her knees shook. For those brief, embarrassing moments, she’d forgotten. She’d even wanted to laugh. Emily’s shoulders slumped. Drew wasn’t here to laugh and smile. Hell, she couldn’t even remember his smile anymore. Nothing about that seemed fair.
Swallowing hard and forcing the lump back down, she lifted the painting and headed back to the mystery cowboy.
He placed his hat on his head and smiled as they exchanged the package. His hands curled about the canvas, cradling it in a protective manner. Hands that while masculine, definitely didn’t seem to be the weathered sort most men around Fly Creek sported.
She glanced again at his face and noted the lack of sun lines in his features. His tan barely scratched the surface of skin she would now bet had been cooped up in an office rather than out in nature. She’d heard the rumblings of a new ranch hand over at Sky Lake, and it appeared this man fit the bill. The word elusive was linked to him, as any number of women who’d come through the store had certainly attempted to catch his eye. Apparently none of them caught his.
One of the many benefits of being a reclusive citizen was people talked around her because they assumed she wouldn’t share what she heard.
It was true, but it didn’t mean she didn’t listen and take note. Kind of living vicariously through gossip. Because that was the closest to living she may ever get again.
“Make sure Shelby uses the wire attached to the back and that it’s evenly distributed across at least two nails or screws.”
He tipped his hat. “I’ll make sure it gets hung properly.” He grinned with full dimple deployment. “Wouldn’t want your talent to go to waste with shoddy hangmanship.”
She suppressed the shiver this time and told her nerves to suck it up. “Thank you.”
“Adam.”
“What?”
“My name’s Adam. Adam Conley.”
She crossed her arms over her chest. Somehow revealing her name seemed far too intimate. Like the first step on a path she’d never thought she’d trod again. And yet the pull of his presence and the familiarity in his gaze, had her boots ready to two-step without her.
“Emily White.”
He nodded and gave her a dimpled smile. “See ya around, Emily.”
Another flush of awareness followed swiftly by guilt.
No, you won’t, Mr. Conley.


She watched him leave. Partly to make sure he did and partly to take in the view, which much to her guilt-ladened mind, was as fine as she’d feared.