Melanie grew up in a small town in rural Missouri. After marrying her husband, she decided she wanted to try coastal life. A few months later, they moved to North Carolina where she discovered her passion for writing, and they never looked back.

Melanie’s other passion is traveling and seeing the world. With anthropology degrees under their belts, she and her husband have made it their goal in life to see as many archaeological sites around the world as possible.

She has a horrible food addiction to pasta and candy (not together…ew). And she gets sad when her wine rack is empty.

At the end of the day, she is a true romantic at heart. She loves writing the cheesy and corny of romantic comedies, and the sassy and sexy of suspense. She aims to make her readers swoon, laugh out loud, maybe sweat a little, and above all, fall in love. 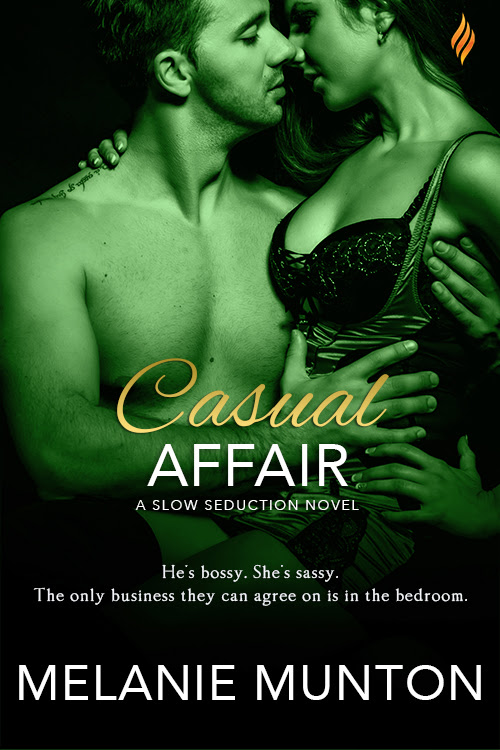 Bea Paxton is a free spirit. She loves her fledgling interior design business, having fun, and she loves men. But only temporarily. Rule #1 is no relationships, no love, no commitment. She likes being in charge. It’s the only way to protect herself from getting hurt again.

Zane Price is the perfect candidate for a steamy time—beautiful, built, and British. Plus, he’ll soon be moving back to England. Really perfect.

Well...except for the fact that he’s her biggest client. And he doesn’t play by her rules. Hell, no. He wants more. Much more. Which is definitely not on the agenda.

Unfortunately, his kisses are nothing short of toe-curlingly awesome. And he is distracting her—a lot—from doing her job.

She needs to stay away from him. Her livelihood depends on it.

But Zane always gets what he wants. And he wants Bea. But for right now? Or forever...?

She was oddly at peace being naked in front of him. Maybe it was the alcohol.

Not a bad idea.

His eyes were passion-glazed as they took her in from head to toe. That was exactly how she wanted him—barely holding onto his control, willing to do whatever she wanted.

She wanted him to be on the brink of insanity before he got back inside her.

She stepped out of his reach and slid one hand up her naked breasts. While she began to fondle her nipples, she sent her other hand lower, to disappear below the scrap of material covering her mound.

He groaned. “You’re killing me.”

His eyes feasted on her as they tracked the way she touched herself. His hands fisted at his sides, and his jaw ticked with every move she made. He looked like he was going to pounce on her any second.

When he moved to approach her, she took a step back and shook her head.
“First you have to finish what I started,” she said, nodding down to his jeans. “I can’t be the only one naked.”

His lips quirked but he didn’t make an immediate move to undress.

Fine. He needed some encouragement? She hooked her fingers through her panties and slowly slid them down her legs.

Taking the hint, he quickly shoved his jeans down with jerky movements, his gaze never leaving her exposed sex. He licked his lips, his eyes dark with need, as he shucked both his jeans and briefs. He was now as naked as she was.

And if she thought his upper half was magnificent, his lower half could have shrines dedicated to it. The man was physically flawless.

She had to touch herself again. Not to torture him this time, but to slake her own overwhelming need. But before she could even begin, he lunged forward and caught her hands in his.

She sucked in a breath.

With his eyes locked on hers, he brought her hands up to his mouth and slowly licked the fingers that had just been touching her most sensitive area.

Well, shit. That was a new one for her.