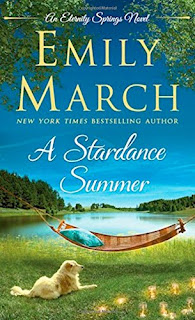 Sometimes the end of one road

Brick Callahan enjoys every minute of chaos at his campground, Stardance Ranch, especially after the Tornado Alleycats arrive for an extended summer stay. The members of the all-female glamorous camping club are primarily seniors―active and adventurous, friendly and fun. But when he discovers Liliana Howe frolicking with the glamping grannies in a late night skinny-dipping session, he fears he's in for a summer of trouble. Because his best friend's kid sister has grown up to be drop-dead gorgeous.

. . .is the start of another
Betrayed by those she trusted, Lili decides she's put her career first for too long. She sells her practical sedan, buys a travel trailer, and heads to Eternity Springs for a summer of rest, relaxation, and reassessment as the newest member of the Alleycats. The last person she expects to find running an RV resort is her high school crush. Their undeniable mutual attraction is a reminder that life is full of surprises. But when the past comes calling, will their summer romance stand the test of time?

When they were growing up, Brick Callahan was Liliana Howe’s brother’s best friend. To the guys, Liliana was the irritating, nerdy little sister. Liliana and Brick haven’t seen each other since they were teens, so he’s surprised that she is part of the Tornado Alleycats, an all-female RV group that arrives for an extended summer stay at his RV campground. Why did she give up her job and life in Oklahoma City to roam on the open road with a bunch of women over fifty? Brick is careful to not date any women more than three times in Eternity Springs or the local matchmakers would start planning a wedding, but it doesn’t stop him from being intrigued—and attracted—to Liliana.

Liliana has spent her life doing what others expect of her, but not getting rewarded. She thought she had the perfect job, and when she discovered something fraudulent taking place, she went to her boss, who then set her up to take the downfall, which got her fired. Discouraged by the lack of empathy from her parents, who think Liliana’s brother can do no wrong, she impulsively buys an RV and goes on the road with her friend, Patsy. Running into Brick surprises her and brings back memories of when she had a crush on him. It’s obvious there’s a whole lot of mutual attraction going on between them, but will Brick and Liliana ignite the flames?

Eternity Springs is a small town in the Colorado mountains where people go to heal and end up finding love. Liliana and Brick knew each other in Oklahoma, but their lives went down a separate path until they unite again in Eternity Springs. She was the perfect girl, smart and always going by the rules, but it caused her to be bullied. He was the smart, but wild boy who hung around her older brother. After Brick “rescued” Liliana during a school field trip, it’s no wonder she ended up with a crush on him. But he only had eyes for her rival, Tiffany, who later ended up breaking Brick’s heart. Now that they’re adults, will Brick see that Liliana is the one he can spend the rest of his life with? But dating might be hard, because Brick fights the attraction. He values his friendship with Liliana’s brother, and she is like a little sister to him. And has he truly gotten over losing Tiffany?

Brick and Liliana start out as old friends in A STARDANCE SUMMER, but are soon turning on the heat between them.  They dance around one another, denying there could be anything, but friends and family continue to push them together. Add in Celeste, who is the ethereal leader of Eternity Springs as she works to show people there is a reason something happens. Also in the picture is Patsy, who is battling a terminal disease but plans to go out on her terms. Liliana’s plans are to stay in Eternity Springs for the summer, so will a fling with Brick only last that long? Will she get a resolution as to what the future holds for her? Can she forgive her parents?

While part of the Eternity Springs series and its many characters interact with Brick and Liliana, readers shouldn’t have too much trouble following along in A STARDANCE SUMMER.

Emily March pulls readers into a spellbinding and sweet summer romance that ultimately brings the answers Brick and Liliana are seeking about their futures. In A STARDANCE SUMMER, falling in love is for a reason and something we shouldn’t question. A beautiful and enchanting tale, I highly recommend you put A STARDANCE SUMMER at the top of your summer reading list.

OOH, LOVE HER BOOKS. THANKS FOR THE CHANCE.
LADBOOKFAN

I have enjoyed several books in this series.

I look forward to reading the newest Eternity Springs novel. Thanks for the giveaway.

I would love to win this book. Sounds V.G.
Natty's Mama

Ooh! Thanks for the chance to win this book sounds really good. ~Kim momof1dd