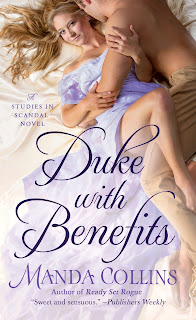 LADY + DUKE = TRUE LOVE?
Lady Daphne Forsyth is a brilliant mathematician with a burning passion for puzzles. When she learns that the library belonging to her benefactress houses the legendary Cameron Cipher―an encrypted message that, once solved, holds the key to great riches―Daphne is on the case. Unfortunately, her race to unlock the cipher’s code is continually thwarted by a deliciously handsome distraction she hadn’t counted on. . .and cannot resist.
Dalton Beauchamp, the Duke of Maitland, is curious as to why Daphne is spending so much time snooping around his aunt’s bookshelves. He’s even more intrigued by her bold yet calculating manner: She is unapologetic about her secret quest. . .and the fiery attraction that develops between them both. But how can they concentrate on solving a perplexing enigma once the prospect of true love enters the equation?
“Witty, sensual historical romance that will captivate readers.” ―Romance Junkies
Duke with Benefits is the second in Manda Collins' Studies in Scandal series set in Regency England.

Regency England
The story so far:  Four scholarly women have inherited Beauchamp House from Lady Celeste
in a contest that stipulates they will live in the home for the period of one year while competing amongst each other for ownership.  Lady Celeste has written each of the bluestockings a personal letter with a message just for her eyes ("Bluestocking" is a Regency term used to describe educated, intellectual women bent on scholarly pursuits.)

Lady Daphne Forsyth is a brilliant mathematician, and even though she never had the pleasure of meeting Lady Celeste, her letter is filled with a carefully worded clue as to what the Lady expects of Daphne.  She is to solve the riddle of the Cameron Cipher, a puzzle that if decoded, will lead to the vast treasures hidden by the Clan Cameron's leader back in days of the Jacobite rebellion, well over one hundred years ago.  The Cipher has been spoken about by many, and those in scholarly circles search for the answer still.  Daphne is certain that the clues to the aged puzzle are hidden in the Beauchamp Library.

Always plain speaking, Lady Daphne is in awe of Dalton Beauchamp, the Duke of Maitland, who has recently come to Beauchamp House for a visit with his cousins, Lady Serena Fanning, the girl's chaperone, and Torquil Beauchamp, the Marquis of Kerr, who has just married one of the bluestockings, Miss Aphrodite (Ivy) Wareham, (see review of READY SET ROGUE, January 2017).  Lady Daphne believes the Duke to be a fine specimen of masculinity, and she seeks to explore the sparks between them by openly propositioning him.  Dalton refuses, and Daphne, embarrassed, has avoided him for three long months, hoping that he will soon leave Beauchamp House.

Dalton is the DUKE WITH BENEFITS; he is extremely attracted to Daphne and falling in love with her more and more with each passing day, but he refuses to take advantage of her inexperience in lieu of marriage.  Daphne refuses to marry him.  When she takes him into her confidence about the Cameron Cipher, he helps her search, a search that is fraught with danger as two outsiders, Mr. Sommersby and Mr. Foster, are demanding entrance to the Beauchamp library.  Daphne has a history with Sommersby; she does not trust him and wishes him gone.  When an attempt on her life quickly follows his visit, Dalton is determined to keep her safe.

What a wonderful story!  DUKE WITH BENEFITS is the second novel in the Studies in Scandal series, but stands totally alone on its own strong merits.  I advise reading READY SET ROGUE (January 2017) purely for the fun of experiencing the complete back-story.  The third book is WALLFLOWER MOST WANTED, and due out around January 2018.

Daphne is unhampered by social convention, having been raised by a series of nannies and tutors who pushed aside her training in deportment to focus on her brilliant mathematical skills.  She is falling in love with Dalton, but has no idea of the rituals and conventions of courtship.  Still, Daphne has no intention of marrying anyone, wishing to focus on her studies first and foremost. Dalton is a traditionalist, and seeks to protect Daphne from herself and from whoever is trying to kill her in order to get to the Cameron Cipher.

A delightful book full of romance, intrigue, and mystery, DUKE WITH BENEFITS should be on your to-buy list for July!

It DOES sound delightful!

How fun! Love the sounds of the slightly geeky heroine!

Sounds great. Thanks for the great giveaway.