One lucky reader will get BOTH copies of Donna Grant's BLAZE and FIRESTORM. These are part of her Dark Kings series. You can find the book order here: 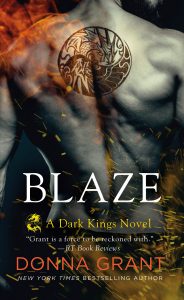 His strength, his masculinity brought out something primal within her. In his arms, she felt like the Amazon warrior she’d once pretended to be as a little girl.

Anson is a fierce Dragon King, a dragon shapeshifter born and bred to protect his own. But when a rogue tech company hacks into their world, he must join forces with the unlikeliest of allies: a human female. Her name is Devon Abrams. A rising star at the firm, she has no idea that her boss is in league with the sinister Fae and their secret war against humanity. If Anson gains her trust, he can defeat the enemy from within. But first he must fight his own attraction—to this exquisitely beautiful mortal…

Devon loves her job at the firm. But sometimes she wishes she could find a man—a real man—who isn’t threatened by her success. When she first meets Anson, she’s overwhelmed by his powerful masculine presence and disarmingly gorgeous smile. But when he reveals his true mission—and his ability to transform into a dragon—she’s irresistibly drawn into an epic battle between humans and immortals, magic and technology, danger and desire. Anson vows to protect her from the Fae. But can he control the flames of passion that blaze within his heart? 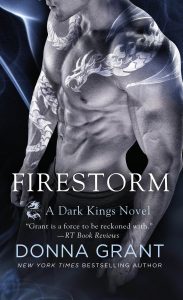 Dimitri lives to protect the secret of the Dragon Kings from the human race. Bound by a bond stronger than blood to the Kings, Dimitri uses his strength and prowess to defend a thousand-year-old secret.  But when an oh-so-sexy, slightly absent-minded archaeologist wanders into his midst, Dimitri will have to give up his rules, and give in to desire…

When Dr. Faith Reynolds stumbles upon an ancient skeleton that appears it comes from a dragon, she’s completely taken aback. A woman of science, there’s no way in her mind that this mythological creature can exist. But when a devilishly handsome man named Dimitri intercepts her path to uncovering the truth, Faith’s curiosity turns into all-consuming passion. She’s never felt this way about any man before. But when Dimitri reveals his biggest secret, can she learn to love the man—as well as the dragon within?

Ooh, would love to catch up with Donna's Dragon Kings! Thanks for the update!

Excited for these releases! Thank you for the chance to win :)