Promo: RUN TO THE GROUND by KATIE RUGGLE 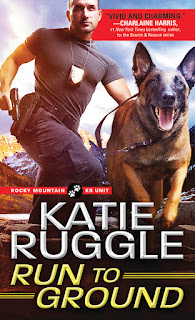 He lost his mentor.
He lost his K9 partner.
He almost lost his will to live.
But when a ruthless killer targets a woman on the run, Theo and his new K9 companion will do whatever it takes to survive—and save the woman neither can live without.

Grieving the death of his partner, Theo Bosco has no room in his life for distractions. Though his instincts scream that he should avoid Juliet ‘Jules’ Jackson, he can’t seem to stay away. It doesn’t help that Theo’s new K9 companion has fallen head over paws with Jules’s rambunctious family.

Or that when he’s with her, Theo finally knows peace.

When Jules rescued her siblings, whisking them away to the safety of the beautifully rugged Colorado Rockies, she never expected to catch the eye—or the heart—of a cop. Yet as Jules struggles to fight her growing attraction to the brooding K9 officer, another threat lurks much closer to home…

And this time, there’s no escape.


Her shoulders lifting and dropping again in a sigh, Jules stiffened her spine. She just needed to be confident. She also needed to not let the cop’s air of authority—as well as his muscled forearms and pretty dark-brown eyes—reduce her to the babbling idiot she’d become the last time he’d been at the diner. For goodness’ sake, she’d messed up her name. Her name. If she wanted to survive in her new life, she needed to step up her game. Firming her jaw, she picked up a coffeepot and headed to Theo’s table.
He watched her, his frown deepening with each step, and she fought the urge to slow or, better yet, turn tail and run.
“Morning.” She turned the mug in front of him right side up with shaky fingers. His wary eyes—almost black and alarmingly perceptive—took in everything, including, she was sure, her obvious unease. “Did you need a menu?”
Jules caught herself before he could respond.
“Sorry.” Her flush prickled her chest and moved up to her face to warm her cheeks. “Of course you don’t need a menu. You probably know everything on there by now. Well, I’m guessing you do. I’ve only seen you here once, but Megan mentioned you’re a regular.”
Abruptly, Jules stopped talking. More of the nervous babble pressed on her lungs, wanting out. Afraid to open her mouth again in case she started talking and wasn’t able to stop until she told this man—this police officer!—everything he shouldn’t know, she forced a smile and stayed quiet. She was turning out to be a terrible felon.
“Number three,” he said after another pause just long enough to make her uncomfortable. “Scrambled.”
“Got it.” Jules scribbled down the order, relieved to have something to focus on other than his too-intense gaze. He looked at her like he could see everything about her, and there were so many things she wanted to keep hidden. When she glanced up, she kept her eyes away from his, focusing on his left earlobe instead. “That’ll be right out.”
After picking up the coffeepot again, she began to turn around, relieved. A sound behind her, something halfway between a masculine grunt and a throat clearing, made her stop reluctantly. Jules focused on his other earlobe this time, trying not to show her renewed panic. “Was there something else you needed?”
“Where are you staying?” He bit off each word, making him sound like he was angry he had to speak to her.
The mild, unfocused fear blossomed into terror. Why was he asking? Was he investigating her? His frown deepened when she took a beat too long to answer, and she rushed out her response. “Um…in Monroe.”
“Where?”
Her paranoia was feeding her panic, and she gave a vague wave toward the north. “On the edge of town.”
If he narrowed his eyes any more, he’d be squinting. “The blue house off of Orchard Street?”
“No.” Her feet moved of their own volition, and she took a step toward the door. This job was too important for her to run out on her second day, but the cop’s questioning was pushing her to the point where she just wanted to escape, paycheck or no paycheck.
“The old Garmitt place, then.” It was a statement instead of a question, and the accuracy of the guess made her eyes widen despite herself. Jules knew fear and guilt must be plastered all over her face. “Heard someone had moved in there.”
“Uh…” Her mind raced as she scrambled to think of the best way to respond, to save this conversation from the quickly approaching crash and burn heading her way. “I’m not sure.” She barely caught herself before closing her eyes in exasperation. That was her clever save?
“Your address is Thirty-Two Blank Hill Lane.” Again, he said what should’ve been a question with such certainty that it came out as a statement of fact. “Did you buy it?”
“No.” Running was beginning to sound better and better. Jules was willing to do pretty much anything to get away from this man, this cop, who knew too much already.


“You rent then?” At her nod, he studied her. She stared back, determined not to say more. Every line in his body was held tightly, from the hard line of his mouth to his forearms to his erect spine. “What brings you to town?” he finally asked.


After the End:
For fans of sexy, brooding ice divers
Motorcycle Club bad boys turned firefighters
Tall, dark, and silent wilderness guides
And cops with hearts of gold…
The end is just the beginning.

What happens after happily ever after? Now that the murderer has been caught and the arsonist is behind bars, the town of Simpson, Colorado has returned to its sleepy, picturesque former glory. Yet for the heroes of Search & Rescue, work is never done…

…especially not if the extraordinary women if their lives have anything to say about it.

Told in alternating chapters focusing on four unforgettable romances, this slice-of-life novella catches up with fan favorites from Katie Ruggle’s Search & Rescue series—proving once and for all that the end is just the beginning.

After the End is the fun and heart-warming epilogue novella to the exciting Search & Rescue series by Katie Ruggle. 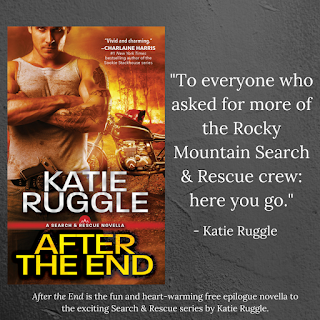