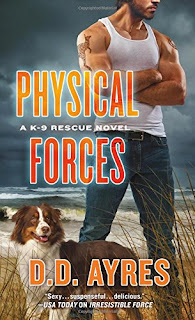 
LOVE TO THE RESCUE
Macayla Burkett is no ordinary private eye. She’s a pet detective, dedicated to tracking down missing dogs and cats. When two famous racing greyhounds disappear and turn up dead, Macayla finds herself in the midst of a much more serious case. And when the thieves target her and threaten her life, she realizes she’s in grave danger―until a ridiculously handsome stranger enters the picture …
Oliver Kelly may look like a male stripper, but his muscles aren’t just for show. The gorgeous Australian is co-owner of a K-9 Search and Rescue service dedicated to saving those in danger. When he and his K-9 partner, an Australian shepherd named Jackeroo, rescue the fiery detective from trouble, the sparks begin to fly. And when they join forces to stop a widespread case of animal theft, it unleashes a torrent of passion that’s impossible to tame…
RRT Review:

After a horrible event, Macayla Burkett left her previous job, but now she has difficulty meeting her bills. In her new job, she works as an animal recovery specialist for former police officer Jefferina Franklin, who runs a private detective agency in the Tampa-St. Petersburg area. Only on this case, Mac, as she calls herself, is a detective searching for the whereabouts of three missing grey hounds stolen from the Derby Lane racetrack. It is a police case, so she cannot do anything other than look for clues. Her mission leads her into a dangerous situation.

Oliver Kelly, a transplanted Australian, goes ‘all Aussie’ in language when annoyed. His Australian shepherd companion, Jackeroo, is in reality a rescue dog. They both work for Bolt Action Rescue K-9 Services, or BARKS, as trainers of search and rescue teams for natural and man-made disasters worldwide. Oliver is in St. Petersburg Beach for a conference where he is a scheduled speaker; the very thought of it gives him the willies. He also plans to take advantage of the beach for stress relief from his job. On the return to his hotel after finishing his run on the beach, he passes a woman scrounging around a dumpster, looking for food. His initial reaction is doubt about a homeless person in this high end area, but he stops to help.

The scruffy looking woman is Mac, trying to rescue a Pomeranian. This encounter leads to a physical confrontation with two hooded figures taking baseball bats to Mac’s car. Interest sparks between Mac and Oliver. More trouble follows Mac, especially after Oliver leaves on a BARKS mission, increasing the suspense throughout the story. All three main characters, Mac, Oliver, and Jackeroo, are well developed. Mac is serious and avoids relationships. Oliver is humorous and avoids relationships. Jackeroo is a well-trained dog who likes to please. When I first started reading, I thought, ‘Pet detective? Really?’ but as author D.D. Ayers works her wonderful plot, I began to think that she planned that initial reaction and then used it to pull the reader ever deeper into the story. It worked; another great story for this series.

Purchase a copy from Amazon.

Would love to win it. Happy Father's Day to all.

I love these books! She is an awesome author. Thanks for the chance to win this one.

Thanks for the contest. Would love to read this.
Natty's Mama