Promo: A Piece of My Heart by Sharon Sala 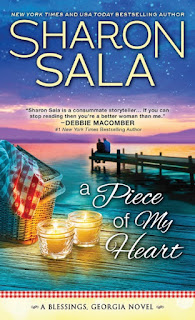 She’s never had a home
Growing up in a troubled foster home, Mercy Dane knew she could never rely on anyone but herself. She’s used to giving her all to people who don’t give her a second glance, so when she races to Blessings, Georgia, to save the life of an accident victim, she’s flabbergasted when the grateful town opens its arms to her. She never dreamed she’d ever find family or friends—or a man who looks at her as if she hung the stars.

Until she finds peace in his arms
Police Chief Lon Pittman is getting restless living in sleepy little Blessings. But the day Mercy Dane roars into his life on the back of a motorcycle, practically daring him to pull her over, he’s lost. There’s something about Mercy’s tough-yet-vulnerable spirit that calls to Lon, and he will do anything in his power to make her realize that home isn’t just where the heart is—home is where their heart is.


Mercy had been working at the bar for over five years. Although she’d turned twenty-six just last week, her life, like this job, was going nowhere.
It was nearing midnight when a quick blast of cold air suddenly moved through the bar and made Mercy shiver. She didn’t have to look to know the ugly part of this job had just arrived.
“Damn, Moose, play some real music, why don’t ya?” Big Boy yelled as the door slammed shut behind him.
Moose glared at the big biker who’d entered his bar. “This is real music, Big Boy. Sit down somewhere and keep your opinions to yourself.”
The biker flipped Moose off, spat on the floor, and stomped through the room toward an empty table near the back, making sure to feel up Mercy’s backside in passing.
When Big Boy suddenly shoved his hand between her legs, she nearly dropped the tray of drinks she was carrying. She knew from experience that he was waiting for a reaction, so she chose to bear the insult without calling attention to it.
As soon as he was seated, Big Boy slapped the table and yelled at the barmaids. “One of you bitches bring me a beer!”
Moose glanced nervously at Mercy, aware that she’d become the target for most of Big Boy’s harassment.
Barb sailed past Mercy with a jingle in every step. “I’ve got his table,” she said.
“Thanks,” Mercy said, and delivered the drinks she was carrying. “Here you go, guys! Christmas Eve cheer and cookies from Moose!”
One trucker, a man named Pete, took a big bite out of the iced sugar cookie. “Mmm, this is good,” he said.
“Mercy made them,” Moose yelled.
Pete shook his head and took another bite. “You have a fine hand with baking. I’d ask you to marry me, darlin’, but my old lady would object.”
Mercy took the teasing with a grin. The men at this table were good men who always left nice tips. In fact, most of the patrons in the bar were men with no family or truckers who couldn’t get home for Christmas. Every now and then, a random woman would wander in to have a drink, but rarely lingered, except for Lorena Haysworth, the older woman sitting at the south end of the bar.
She’d been coming here since before Mercy was born, and in her younger days she and Moose had been lovers before slowly drifting apart. She’d come back into his life a few months ago and nightly claimed the seat at the end of the bar.
Barb took the first of what would be multiple beers to Big Boy’s table, along with a Christmas cookie and a bowl of stale pretzels, making sure to keep the table between them.
Big Boy lunged at her as if he was going to grab her, and when she turned around and ran, he leaned back and laughed.
Mercy returned to the bar with a new order and waited for Moose to fill it.
“Sorry about that,” Moose said, as he glanced toward the table where Big Boy was sitting.
Her eyes narrowed angrily. “How sorry are you? Sorry enough to kick him out? Or just sorry his money is more important to you than me and Barb?”
Moose’s face turned as red as his shirt. “Damn it, Mercy. You know how it goes,” he said, and pushed the new order across the bar.
She did know. The customer was always right. Trying not to buy into the turmoil, she picked up the tray and delivered the order with a smile.
The night wore on with Big Boy getting drunker and more belligerent, while Barb and Mercy dodged his constant attempts to maul them, until finally, it was time to close.
It was a few minutes before 2:00 a.m. when Moose shut down the bar. There were only three customers left. Big Boy, who was so close to passed out he couldn’t walk, Lorena, who was waiting to go home with Moose, and a trucker who’d fallen asleep at his table.
Mercy headed for the trucker, leaving Moose to wrestle Big Boy up and out.
The trucker was a small, wiry man named Frank Bigalow who fancied himself a ringer for country music star Willie Nelson. He was dreaming of hit songs and gold records when Mercy woke him.
“Frank. Frank. You need to wake up now. We’re closing.”
Bigalow straightened abruptly, momentarily confused as to where he was, then saw Mercy and smiled.
“Oh. Right. Sure thing, honey. What do I owe you?” he mumbled.
“Twelve dollars,” she said.
Bigalow stood up to get his wallet out of his pants then pulled out a twenty. “Keep the change and      Merry Christmas,” he said.
“Thanks,” she said, and began bussing his table as he walked out of the bar.
Moose had Big Boy on his way out the door, and it was none too soon for Mercy.
She handed Moose the twenty when he returned. “Take twelve out. The rest is mine,” she said, and pocketed the change Moose gave her.
Within fifteen minutes, the bar was clear and swept, the money was in the safe, and Barb and Mercy were heading for the door.
“Hey! Girls! Wait up!” Moose said, then handed them each an envelope, along with little bags with some of Mercy’s cookies. “Merry Christmas. We’re not open tomorrow so sleep in.”
“Thank you,” Barb said, as she slid the envelope inside her purse.
“Much appreciated,” Mercy added, as she put her envelope in one of the inner pockets of her black leather bomber jacket. It was old and worn, but it was warm.
Then she grabbed her helmet and the cookies and headed out the door behind Barb and just ahead of Moose and Lorena. Once outside, she paused to judge the near-empty parking lot, making sure Big Boy and his Harley were at the motel across the street.

cheryl c said…
I have heard great things about this author, but I haven't read her books yet.
4:03 PM