Mix together a Marquess hell-bent on revenge, a seemingly cursed bride, and a forced marriage that might just end in love after all and you’ll get Janna MacGregor’s sparkling debut, THE BAD LUCK BRIDE (St. Martin’s Paperbacks; May 2, 2017).  This new Regency era romance finds its heroine, Claire Cavensham, unable to keep a suitor…again.  Claire is convinced her bad luck will never end, that is until Alexander Hallworth, Marquess of Pembrooke, steps in and changes everything.  His need for vengeance has him plotting to marry his enemy’s fiancée, but soon he finds himself falling for her.  Once secrets are revealed about the real reasons behind their engagement, will the scandal that ensues prove that Claire truly is cursed, or is their love strong enough to endure it… Readers of Regency romances and love stories alike will find themselves swept up in the tantalizing first installment of the Cavensham Heiresses series! 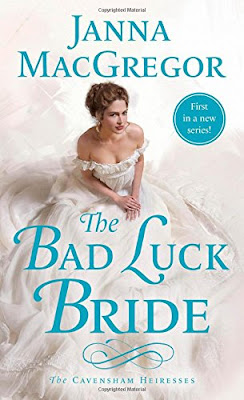