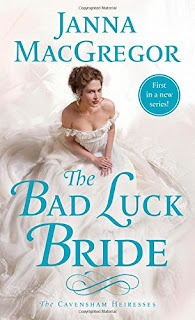 THE BAD LUCK BRIDE – Janna MacGregor The Cavensham Heiresses St. Martin's Paperbacks ISBN: 978-1-250-11612-3 May 2017 Historical Romance England – 1811 Alexander Hallworth, Marquess of Pembrooke, is seeking revenge on his childhood friend, Lord Paul Barstowe. Alice, Alex's youngest sister, left a suicide note upon her death begging Alex not to blame Paul. So it stands to reason to Alex that it was because of Paul that Alice killed herself. It seems that Lord Paul has proposed to Lady Claire Cavensham, known to the ton as “cursed” because of the number of men who either died or broke off the engagement. Now, at a ball, word has it that Claire is being dumped once again. To Alex, who orchestrated much of Lord Paul's demise in Society, this is the opportunity to publicly humiliate his former friend by taking his betrothed as his wife. Claire has had it with being humiliated at every turn. As she receives word of Lord Paul's note backing out of their engagement, the Marquess of Pembrooke comes to her rescue, or so it seems. She is hardly able to ignore a marriage proposal that seems timely to save her from more embarrassment, but she does wonder why a man of Pembrooke's reputation would suddenly want to marry her? Still, this may be her last chance to have the family she dearly wants. With the approval of her uncle and aunt, with whom she's lived with since her parents' deaths, Claire agrees to wed the very rich, very handsome marquess. Neither Alex nor Claire assume anything in their new marriage – least of all love. They certainly seem compatible, and Claire is charmed by her husband's seemingly sincere caring. Claire is completely unaware of the reason Alex proposed. What will happen if she finds out? THE BAD LUCK BRIDE is the debut novel for Ms. MacGregor, and it's a fabulous start. Well defined characters, a unique plot, and beautifully written, this is a sweet, sometimes poignant story of two people coming to terms with life. Claire is much tougher than Alex gives her credit for – she's been through a lot, and has her own secrets. And Alex learns more than one lesson about revenge and how it affects those around him. A great beginning to a new series and a new author. Jani Brooks

I have been hearing good things about this book.

I've seen lots of reviews for this one! i can't wait to read it.