Q & A with Suzanne Enoch! 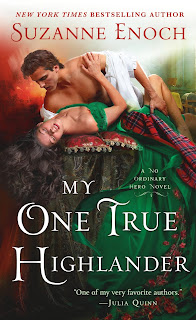 1.    Tell us about your release. Tease us with a blurb!
My One True Highlander is the second book in the “No Ordinary Hero” series. Marjorie Forrester finds that despite her education the ton isn’t interested in befriending her now that her brother’s inherited an unexpected dukedom in Scotland. Needing an escape from London, she decides to surprise her brother, the Duke of Lattimer, before his impending wedding – only to be kidnapped once she reaches Scotland.
Graemae, Viscount Maxton, is neighbors with Lattimer, and a chieftain of clan Maxwell, enemies of Lattimer. When his young brothers kidnap Lattimer’s sister, he’s placed in a three-way dilemma – turn her over to his clan chief and possibly get her killed; release her and see his brothers arrested; or decide if he can trust Marjorie and perhaps find an altogether unexpected way to proceed.
The muffled pounding ahead of him grew steadily louder as he approached. “I know someone’s out there!” she called. “I demand to speak to Graeme Maxton at once!”
“Och, ye demand, do ye, yer highness?” he returned, glad she met his expectations of a rich, delicate, spoiled aristocrat. While he couldn’t quite manage to blame her for all of this, to himself he could agree that she likely deserved a little fright and discomfort. “I’m here, then, so stop yer yowling. What do ye want?”
“There… There are foxes in here.”
Graeme shared a glance with Cowen, amusement pulling at him. Served her right, the spoiled miss. “Foxes, ye say?”
“Yes. Two of them. They’re both staring at me with their beady eyes, and one of them is growling.”
He didn’t want her bitten, damn it all. Turning the key, he shoved open the door. The lass staggered backward, and he caught her arm before he could stop himself. Her skin was soft and warm and smooth, and he released her the second she got her feet under her again.
“You see?” she enunciated in her precise English tones, pointing beneath the small couch. “Foxes.”
“Daisy. Pete. Go find Connell,” he ordered, stepping farther into the room.
The pair of foxes bounded out of the sitting room in a flash of red fur and white-tipped tails. It wouldn’t do for the foxes to reside in Connell’s room while the lad had rabbit kits hidden there, but once he moved Lady Marjorie to her guest bedchamber they could return to their sitting room den.
“Better, m’lady?” he asked, finally giving her his full attention. Black hair, aye, a bit disheveled after the sack and the travel in the back of the wagon, but still long and curling and soft-looking. She likely had a maid brush each strand a dozen times before bed. That wouldn’t be happening tonight, however.
“Yes. Thank you. Though you might have told me they were pets.”
“I might ask in return whether ye reckon all Highlands hooses have wild foxes settled in their sitting rooms,” he commented, folding his arms across his chest. Graeme cocked his head at her. “How the devil did ye manage to get stolen by a handful of bairns? Or are ye daft enough to think yerself safe alone in the Highlands?”
“I’m not alone,” she retorted, managing to look regal despite the half-fallen hair and the mud-edged green gown. “I stepped away for a breath of fresh air, and the little boy lured me away by asking for my help.” She put her hands on her slender hips. “Do you often use children in your nefarious dealings? That is shameful, sir.”
“Ye’ve mud on yer cheek,” he noted, curling his fingers against the desire to brush it away. “Ye’d look more indignant if ye were clean and yer hair put back up, I reckon.”
“I was clean and my hair put up, before your hoodlums kidnapped me,” she retorted. “And my good will is swiftly vanishing. Set me free by sunset, or—“
Graeme closed the distance between them. “Or what?” he murmured. “Dunnae make threats against me or mine, lass. Ye’ve nae idea what’s afoot here, or how very restrained I’m being.”
She lifted her chin to continue meeting his gaze. “Clearly I don’t know what’s going on. All I do know is that I was on my way to see my brother and now I’m Graeme Maxton’s prisoner somewhere in the Highlands. You tell me not to threaten you, but you’ve already done far worse to me, sir.”
A man could get lost in those sky blue eyes of hers, he decided. And she’d likely smile and dance away and entangle the next unfortunate lad who crossed her path, and then the one after that. “Ye’ll stay here another hour or so, then we’ll move ye into somewhere a mite more comfortable. Likely nae as luxurious as what ye’re accustomed to, but it’ll have to do.”
“And then?” she demanded, looking fierce but for the ghostly pale of her cheeks – unless the hue of fine porcelain was her normal color.
Deliberately he smiled. “And then we’ll see.”

2.    Name five things (not research notes) that are on your desk right now.
The book “Lost Inverness” by Norman S. Newton
The score to “Rogue One: A Star Wars Story”, by Michael Giacchino
A map of Inverness
A Treebeard action figure (from Lord of the Rings)
A box of band-aids (I like to write by hand, so I have to pad my middle writing finger

3.    What’s the best advice (writing or personal) that anyone has ever given you?
Know the difference between a job and a career. One earns you money, but the other feeds your soul. (One of my English professors, Oakley Hall.)

4.    What is your writing day like?
I get up, feed my fish and birds, have breakfast, then sit down and check my emails and too much Twitter, post on Facebook. Then I put on some music (I have a couple of writing playlists), pick up my notebook and a pen (and a band-aid), and write by hand until about 2 o’clock in the afternoon. After that I transcribe what I’ve hand-written into the computer.

5.    If you could have dinner anywhere with any five authors, dead or alive, which five would you choose?
I actually do this every year. I spend a week on the Oregon coast every year with my five favorite writers in the world. Karen Hawkins, Linda Needham, Susan Andersen, Victoria Alexander, and Stephanie Laurens.

6.    If you weren’t writing, what other career would you have?
I would love to work in a zoo, in the ape house preferably – though I’d be happy with anything but the snake and insect sections. If I couldn’t be a princess, of course.

Suzanne was born in Southern California sometime in the latter half of the 20th century. In the way that some people are born knowing they want to be astronauts or cellists, Suzanne always knew she wanted to be a writer. Early dreams of becoming a zoologist and writing true stories about her adventures in Africa were crushed, however, after she viewed a television special about the world’s most poisonous snakes; she did NOT want to write about how she’d been bitten and lost a limb to a cobra. Thankfully at the same time the movie “Star Wars” premiered, and she realized that she could make up adventures and write about them, and not be eaten by deadly predators while doing research.

She dabbled in romantic fantasy writing for a year or two after graduating with a degree in English from the University of California, Irvine, until her affection for traditional Regency romances led her to write one for fun. After several encouraging rejections from publishers, she snared the interest of the world’s best and most patient literary agent, who advised her to revise the manuscript. This ultimately led to the publication of her first book, The Black Duke’s Prize, from Avon Books in the Spring of 1995. A second Regency, Angel’s Devil, followed that Fall.
When Avon folded its traditional Regency line, Suzanne was encouraged to try her hand at historical romance. As she remained keenly interested in England’s Regency period, she decided to attempt another manuscript set in that time. Lady Rogue hit the shelves in March of 1997. She wrote a total of 29 books for Avon, including two anthologies and a five-part contemporary series which received a pair of starred reviews from Publishers Weekly. One of those books, Twice the Temptation, was named one of the five best romances of the year by PW in 2007.
In 2002 her well-known love of all things “Star Wars” led to an invitation to appear on the E! channel in the television special “Star Wars: The Force Is Back”, where she discussed the romance in the movie series and ended up with more air time than George Lucas.
Suzanne is known for her humorous characters, sexy bad boys, and whip-sharp, witty dialogue.  She currently resides in Placentia, California with several hundred guppies and various other tropical fish, and handful of very loud, spinach-loving finches. And her collection of action figures and statues from “Star Wars”, “Lord of the Rings”, “X-Men”, and “Pirates of the Caribbean”. Everybody needs some inspiration, after all.

DARE TO FALL IN LOVE

Scotland, 1812—Rugged Highlander Graeme’s loyalty to his clan means that their enemies are his own—even when that includes his neighbor, the Duke of Lattimer. It’s a fight he doesn’t relish, but when Graeme’s reckless younger brothers foolishly kidnap Lattimer’s younger sister, all bets are off…
Lady Marjorie Forrester may be aligned with the enemy, but capturing her puts Graeme squarely in the middle of a war. If he turns Marjorie over to his clan chief, she could be killed. If he lets her go, his brothers could face prison. In addition, the woman can’t stop trying to civilize the lot of them! What’s a Highlander to do, then, but keep the stubborn lass close…and explore the unexpected passion that develops between them? But how can Graeme protect Marjorie and his brothers when both Lattimer and his own clan are on the warpath—and will do whatever it takes to tear these two star-crossed lovers apart, in My One True Highlander, the next No Ordinary Hero Scottish romance from New York Times bestselling author Suzanne Enoch.

Great review thank you, I can't wait to read this
Penney