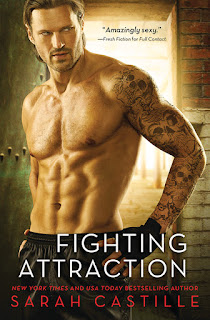 My sweet, sexy Penny has a dark side. Just like me.
I will have her. And then I will lose her, and suffer a lifetime of regret.

Rampage. Everyone loves him. He is Redemption's top heavyweight fighter and the biggest gossip in the gym. But he isn't the teddy bear everyone thinks he is. He's hiding a dark secret-and he hates himself for it.

Twice a week, Rampage transforms into Master Jack, a notorious dom only the most hard-core submissives will play with. How can he-a Southern gentleman, bred to respect and protect women-want to dominate them?

But Penny Worthington wants him. Beneath her pearls, kitten heels, and prim British exterior beats a tortured heart...Master Jack is the only one who can set her free.

"Powerful. Gritty. And sexy beyond belief. Sarah is a true master!"-Opal Carew, New York Times bestselling author of His to Claim

"Hilarious, hot and occasionally heartbreaking. I loved it! " - Maryse's Book Blog on Against the Ropes

"Castille's follow-up to the excellent Against the Ropes doesn't pull its punches." - Publishers Weekly, starred review for In Your Corner 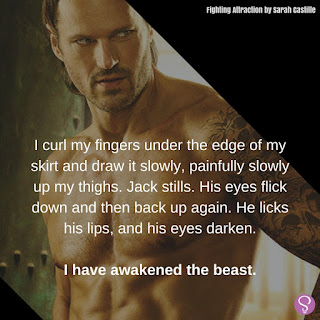 What is Jack’s favorite music? The sound of Penny’s screams

Jack “Rampage” Caldwell is the first MMA fighter I created for the Redemption series, and even when I first brought this Southern gentleman to life, I knew he had a secret. But Penny has a dark secret, too. After Jack discovers what she hides from the world, he makes her promise to come to him if she needs him. But trust doesn’t come easily for Penny. She breaks her promise, never expecting that Jack will find out. But, of course, he does…and crossing a sadist is never a good idea!

Cora sucks in a sharp breath. “I’ll see you at class tonight. I can hardly wait to hear all about it.”

I end the call and swallow past the lump in my throat. It’s only been three days, and yet it feels like I haven’t seen Jack in forever. He’s wearing a white T-shirt that clings to his taut, muscle-ridged abdomen, and worn jeans that ride low on his narrow hips.

“What are you doing here?” I ask, trying to keep my gaze above his belt.

He pins me with a direct stare, his eyes fierce and hard. I feel like he’s trying to see into my soul, but my heart is pounding so hard I’m not sure enough oxygen is getting to my brain to make any sense of what’s going on.

His gaze rakes over my body, lingering on my thighs as if he can see beneath my skirt. He tenses, and his eyes narrow. If I didn’t know X-ray vision was impossible, I would swear he knows I broke my promise.

“Yes.” My pulse kicks up a notch. “Everyone’s out for the rest of the afternoon.”

He takes a step toward me, and the hair on the back of my neck stands on end.

A thrill of fear shoots through me, and sweat beads on my forehead. What if he knows? Or suspects? What will he do?

“Now.” His deep, commanding Dom voice ripples through me, fanning the flames of my desire. Do I trust Jack enough to lock myself in the office with him, especially when I know what is coming? Do I trust myself?

I brush past him and lock the front door.

“Your office,” he snaps after I return.

I jump at his sharp tone and scramble out of his way as he brushes past me and through my office door, a lithe and powerful animal herding its prey.

“Stand in front of the desk.” He gestures to the big oak desk Amanda and I refinished when we first moved into the building.

Puzzled, I do as he asks, my breath catching in my throat when he closes and locks the door behind him.

He gives me his back as he draws the curtains at the side of my office. “Don’t move.”

A sting of disappointment hits me in the chest. Has he come to reject me all over again? Does he want to make sure I understand there is nothing between us? It shouldn’t bother me because I got the message the other night. I’m nothing. Nothing special. Nothing extraordinary. Not worth his time, especially since he’s on the cusp of fame. I’m just his pal. Plain old quirky Pen. But he doesn’t have to be so cold.

No. No. No. My fingers tighten on the lip of the desk. I haven’t even started to heal from last night. I don’t need the past intruding on the present.

Jack leans against the door across from me, thick arms folded over his massive chest.
“Lift your skirt.”

Shock steals my breath away, and all I can do is stare.

“You heard me. Lift your skirt. Now.”

Bang. Bang. Bang. My heart thuds frantically against my ribs. Adrenaline pounds through my veins, and I feel a rush of heat between my legs. He knows. I can see it in his eyes, hear it in his voice…

“Why?” I whisper, stalling. And why is this turning me on?

“You know why,” he snaps. “You didn’t keep your promise.”

I smooth my hands over my cream skirt, silky underneath with a cotton macramé overlay, pressing it tight against my thighs. “It doesn’t matter if I kept it or not. We’re not in the club. There’s nothing between us. You made that clear the other night.”

“I fucked up the other night.” He shifts his stance. “I’m not good for you, Pen. You need to be with someone normal. A nice guy who’s going to treat you right and doesn’t want to hurt you.”

My hand fists on my thigh. “I don’t like nice guys. They don’t understand me. They’re too gentle. My life is about pain. Emotional and physical pain. It’s what I know, what I understand, what I need.”

“So you hurt yourself?”

He cuts me off with a scowl. “Don’t lie to me.” He pauses, and his voice takes on a deeper, cutting edge. “Show me.”

My mouth goes dry at his abrupt command, and I fiddle with the edge of my skirt, at once indignant that he would try to boss me around and aroused that he did.

“What if I did?” I say defiantly. “There’s nothing you can do about it.”

His corded throat tightens when he swallows, and he fixes me with a level stare. “I’ll give you what you need.”

All the air leaves my lungs in a rush, and I feel a disconcerting wetness between my thighs. “You wouldn’t dare. I’m at work.”

Electricity sparks in the air between us, and a curious mix of fear and arousal courses through my veins. Stiffening my spine, I curl my fingers under the edge of my skirt and draw it slowly, painfully slowly up my thighs. Jack stills. His eyes flick down and then back up again. He licks his lips, and his eyes darken.

I have awakened the beast.