Promo: BY THE HOUR by RONI LOREN 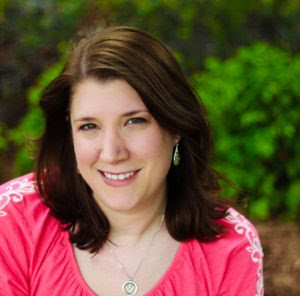 Roni wrote her first romance novel at age fifteen when she discovered writing about boys was way easier than actually talking to them. Since then, her flirting skills haven’t improved, but she likes to think her storytelling ability has. If she’s not working on her latest sexy story, you can find her cooking, watching reality television, or picking up another hobby she doesn't need--in other words, procrastinating like a boss. She is a RITA Award winner and a New York Times and USA Today bestselling author.
Connect: Site | Facebook | Twitter | Goodreads 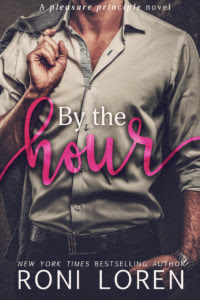 From the New York Times bestselling author of Off the Clock comes a story of love, hate, and the fire that ignites when the two collide...
Dr. Elle McCray has a plan. Work hard. Be the best. And do it alone. After her ex-husband’s betrayal, she’s learned being feared is a hell of a lot easier than being humiliated. So when trouble personified, Lane Cannon, dares to flirt with her, she shuts him down cold. Too gorgeous. Too cocky. And his job as The Grove’s sexual surrogate is to sleep with patients. No, thank you.
Former escort Lane Cannon has spent enough years with people looking down on him. Stupid. Trailer trash. Rent boy. He’s heard it all. He’s worked too hard to shed his past to let some haughty doctor cut him down. But something about Elle’s ice queen act has his dominant instincts perking up and his body taking notice. He can’t walk away.
After an evening of verbal sparring turns into a night of steamy hate sex, Lane’s ready for round two. But Elle proposes a business deal. How better to keep things strictly physical than to pay him for his services?
Lane wants her, not her money. But he’ll play along in exchange for one thing—all the control. It’s only supposed to be a dirty little fling between colleagues, but these two are about to learn a lesson in love…by the hour.
Purchase: Amazon | Barnes & Noble | iTunes | Kobo

Check out the other books in the  Pleasure Principle series: 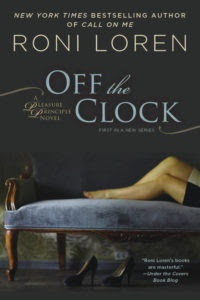 
Elle picked up the phone with intentions of turning the ringer off, but before she could silence it, there was a sharp knock on her door. The interruption startled her and made her drop the still ringing phone onto the rug beneath her desk.
“Dammit.” Distracted, Elle called out for whoever it was to come in and then bent down to grab the phone and silence it. “If you want to talk to me, leave a freaking voicemail. I do have a job, you know.”
“I’m aware.”
The deep rumble of a voice had her head snapping up, and she promptly banged it on the underside of her desk. “Son of a bitch.”
The ringing that had stopped with the phone started in her head. She rubbed the sore spot, and sat up to find Lane standing in her doorway with a white box in his hands and an unreadable expression.
“You okay?”
The spot on her head was throbbing but she gave a curt nod, not wanting to give him the satisfaction. “I’m fine. Why are you here?”
His signature smugness touched his lips. “Always such a warm welcome from you, McCray. I bet you worked your way through college as a greeter at Disney World. Am I right?”
“Yep. Wore the ears and everything,” she said, not missing a beat. “Now answer the question.”
Because the sooner he did that, the sooner she could get him out of here. Just seeing him leaning against her doorframe with that lazy, self-satisfied way of his had her mind replaying the scene from that night in her head. Only the highlight reel, of course. Not the ugly parts. Not the part where she ended up alone on her living room floor having a freak out. Her dirty mind was fantastic at editing out the stuff she was supposed to be focusing on.
He lifted the box. “I come bearing cupcakes.”
At first, all she heard was I come. Boy, did he. With sexy grunts and brute force. She shook the images from her head. God, she turned into a horny teenager when she was around this guy. Pack the hormones away, Elle. She cleared her throat. “Cupcakes?”
He opened the box and revealed eleven cupcakes with hideous bright pink frosting. “These got delivered to the wrong building on the wrong date, and I’m guessing with the wrong color, because no one who wasn’t having a pretty, pretty princess birthday party would choose these. But they were supposed to go to you for your birthday. Happy late birthday, Elle.”
She kept her expression smooth, even though hearing someone finally wish her happy birthday had her throat tightening. She swallowed past the unexpected and unwelcome emotion. “What happened to the twelfth one?”
He set the box on her desk and the door closed behind him. “I did a poison test for you. They’re safe but turn your tongue and teeth colors.”
He stuck out his fluorescent tongue and then grinned a toothy, pink smile to demonstrate.
She couldn’t stop the snort that escaped. She pressed her fingers over her mouth, trying not to show any break in her stone wall.
He waved a hand. “No, go ahead. I know. So many jokes that can be made. Don’t let your head explode from not saying one.”
“You should get that checked.”
He gave another encouraging flick of his hand. “I know there’s more.”
“Did Miss Piggy at least buy you a drink before you went down on her?”
He grinned wide.
“Did she taste like bacon?”
He laughed at that one, a warm, open sound that he’d never made in her presence. “I knew there was a sense of humor in there somewhere.” He lifted an eyebrow. “And Miss Piggy bought me a whole meal, which is more than I can say for the last woman I slept with.”
She stiffened at that, and the smile that had slipped out fell away. “Thanks for bringing them by but—”
“You’re busy. Yeah, I’m sure you are. And I got that we’re not supposed to talk about it. But look, here’s the deal. I have a very low tolerance for drama in my life these days. This”—he pointed a finger back and forth between the two of them—“is drama neither of us needs. So consider what happened done. I do. Both of us should’ve known better. We didn’t get along to begin with. A hot night in bed isn’t going to change that.”
She tipped her chin up, trying to maintain her cool composure. “No, it’s not.”
He smiled. “Got you to admit that it was hot.”