Promo: BETWEEN A WOLF AND A HARD PLACE by Terry Spear 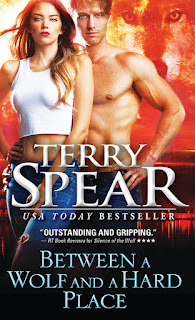 Alpha werewolf Brett Silver has an ulterior motive when he donates a prized family heirloom to the Silver Town hotel. Ellie MacTire owns the place with her sisters, and he’s out to get her attention.

Ellie is even more special than Brett knows. She’s a wolf-shifter with a unique ability to commune with the dead. Ellie has been ostracized, so she protects herself and those she loves by revealing nothing—not even when strange and dangerous things begin to happen in Silver Town. And especially not to the devastatingly handsome and generous wolf who’s determined to win her over…

USA Today bestselling author TERRY SPEAR has written over 35 paranormal romances featuring werewolf and jaguar shapeshifters. In 2008, Heart of the Wolf was named a Publishers Weekly Best Book of the Year. A retired officer of the U.S. Army Reserves, Terry also creates award-winning teddy bears that have found homes all over the world. She lives in Spring, Texas.

Excerpt from: Between a Wolf and a Hard Place

When Brett and CJ arrived at the inn, they got out to help guide the piano movers. Laurel met CJ outside, giving him a big hug and kiss. Brett sighed. He’d love it if he and Ellie got to that point in their relationship—and soon. They’d both been busy lately, she with the inn and he with reporting about Victorian Day festivities. So he hadn’t seen her as much as he would have liked.

As soon as they went inside, he saw Ellie showing the movers where she thought the piano should go, while Meghan insisted it should be more to the right of the stairs.

Then Ellie caught his eye and smiled, and he felt his whole outlook brighten. She was the darkest-haired redhead of the bunch, her long, curly hair auburn in color, and to him, sexier and more mysterious. He wanted to ask her out tonight. He could cook, though he’d do better grilling outside.

She turned her attention to the piano again, frowning. And Meghan was frowning too.

Poor movers. Brett thought the two ladies would have the men relocate the piano all over the lobby before settling on the perfect place for it. Instead, Ellie suddenly looked pale and said it was fine where it was. Meghan quickly nodded, looking just as ashen.

CJ and Eric readjusted the burgundy, brocade-covered bench in front of the piano, which made Brett remember he needed to box up all the sheet music and books and bring them over. He’d taken them out of the bench when he had its seat cushion reupholstered last year, and they were still sitting in a box in the spare bedroom.

Brett paid the movers and they cleared out.

“Got to get back to work,” Eric said, giving Brett a knowing look. “Late shift working as a park ranger tonight.”

“Yeah, I’ve got to get back to the business of sheriffing.” CJ smiled at Ellie. “Can you drop me off at the station, Eric?”

“Sure thing,” their eldest brother said.

Sarandon was admiring the piano, arms folded across his chest, when he realized his brothers were leaving and snapped out of his thoughts. “Yeah, I’ve got to get back to work too.”

Brett knew Sarandon didn’t have a guide job in the park tonight, so he was glad Sarandon was vacating the premises pronto, taking his brothers’ cues. Now if only Ellie’s sisters would leave the two of them alone.

Laurel took Meghan’s arm and hauled her toward the back door. “Let’s go fix supper, why don’t we?”

“For two, three, or four of us?” Meghan asked with a smile in her voice as they disappeared outside.

Brett didn’t hesitate before he moved toward Ellie, placed his hands on her shoulders, and leaned her gently against the piano, blocking her from escape if she thought to put on the brakes again. “Would you be up for dinner for two? You don’t have any guests for the next week,  unless something has changed.” He rubbed his thumbs against her shoulders, loving the feel of her, the sweet, fresh fragrance of her. She looked beautiful in her soft teal sweater, rust-and-teal-plaid skirt, and high-heeled boots, her dark-red hair in silky curls around her shoulders.

She was soft in his arms and appeared receptive when he leaned down to kiss her. It seemed like the perfect time. No one was around. The piano had been the perfect gift. Now it was time to kiss her like he’d wanted to since they’d first started dating. As soon as their mouths touched, she responded by wrapping her arms around his back, but then Eric felt her jump a little and pulled his mouth away, wondering if he was going too fast. If he’d done something wrong.

She quickly moved against him, pushing him away from the piano, her heartbeat racing, her breathing unsteady, the color that had infused her cheeks instantly draining from her skin.

“What’s wrong?” he asked as Ellie moved him even farther from the piano. He thought maybe she had gotten static-electric shock from touching it.

Yet she was visibly upset, and he wasn’t sure what the difficulty was.

“Thanks for the piano. It’s beautiful.” Ellie glanced back at it, but not in an admiring way. She was looking off to the right of it, a frown marring her temple , which he thought was odd.

“Why don’t I take you to the Silver Town Tavern? If you like steak, they have great cuts there.  And we can catch up on what’s been going on.”

“I hear you’re working on some interesting  stories.”

“Yeah. My favorite? The last time the Silver Town Inn was part of the Victorian Days celebration. The idea seemed appropriate since this will be the first time the inn is open for business during the festivities since then.”

“I can’t wait to read it.” Ellie glanced back at the vicinity of the piano one last time before she shut and locked the front door to the inn.

“We can help you move the piano again if you don’t think it’s in the right place,” Brett offered, getting the car door for her.

“Uh, no, I think it’s fine.” But she didn’t sound like she thought so.

He was afraid he’d pushed her too fast on the kiss, yet she’d seemed so willing. He didn’t know what he had done wrong, but he had every intention of proving how much being with her meant to him, no matter what the difficulty might be.

Ellie couldn’t believe that not only had Chrissy shown up, looking interested in the piano, but so had some other woman. She was older, with white hair and dark eyes, and had appeared when Brett leaned Ellie against the piano and gave her the beginning of a spine-tingling kiss. It was so reminiscent of the start of the dreams she was having about him that Ellie could have screamed when seeing the ghost shook her up and ruined the in-the-flesh fantasy with Brett.