Promo and Review: IT HAPPENED ON LOVE STREET by LIA RILEY 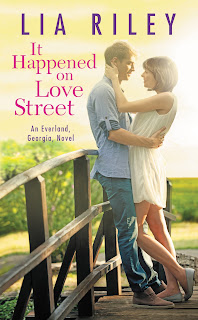 In the tradition of New York Times bestselling authors Kristan Higgins, Jill Shalvis, and Marina Adair, comes the first in a new series by Lia Riley about two city sisters finding love in a small town.

The most romantic place she never wanted to be . . .

Pepper Knight moved to Everland, Georgia, as step one in her plan for a successful legal career. But after this big-city gal's plans go awry, going home with her tail between her legs isn't an option. So when the town vet—
and her sexy new neighbor—offers Pepper a temporary dog-walking job, she jumps at the chance. No one needs to know that man's best friend is her worst nightmare . . . or that Everland's hot animal whisperer leaves her panting.

The last thing Rhett Valentine wants is to be the center of small-town gossip. After his first love left him at the altar, he's been there, done that. These days, life is simple, just the way he likes it. But sultry southern nights get complicated once sparks fly between him and the knockout next door. When she proposes a sexy, secret fling—all the deliciousness and none of the prying neighbors-it seems too good to be true. And it is. Because Pepper's determined to leave Love Street, and when she goes, she just might take his heart with her . . .

IT HAPPENED ON LOVE STREET, #1
THE CORNER OF FOREVER AND ALWAYS, #2

Lia Riley is a contemporary romance author. USA Today describes her as "refreshing" and RT Book Reviews calls her books "sizzling and heartfelt." She loves her husband, three kids, wandering redwood forests and a perfect pour over coffee. She is 25% sarcastic, 54% optimistic, and 122% bad at math (good thing she writes happy endings for a living). She and her family live mostly in Northern California.

Review of IT HAPPENED ON LOVE STREET

Pepper Knight moved to Everland from New York City to take a court clerking job, but when she arrives, she learns that the offer has been given to someone because of nepotism. Now stuck in a small town with no job or friends, she is not sure what to do, especially since she used all her money to move. Then she runs into her next-door neighbor, Rhett Valentine, who is the town veterinarian. Rhett is soon helping Pepper get a job as a dog walker. Anything will do for the cash poor Pepper, but for someone who has a fear of dogs, is she flirting with disaster?

Rhett is used to being the object of the town’s attention despite his trying to stay out of the limelight. His claim to “fame” is being jilted at the altar years ago and, since then, he’s avoided a committed relationship like it’s the plague. But Pepper intrigues him, and he goes out of his way to help her whenever he can. Pepper and Rhett become good friends and are soon locking lips, plus much more. They’re hoping to keep their fling a secret, but with an elderly neighbor popping up in unexpected places to spy on them, it’s hard to do. While a short affair seems perfect for commitment phobia Rhett, how will he react if Pepper moves away?

Pepper grew up in a small town in Maine, but escaped to New York City, where she obtained a law degree and a low paying job. She jumped at a chance to work in a small town in Georgia without even visiting it. Alas, the job offer was withdrawn, and she’s suddenly penniless and stuck in Everland. Pepper also is deathly afraid of dogs, and it appears just about everyone here has at least one dog. She meets Rhett, and he’s very neighborly towards her, even helping to get her a job walking dogs. While her “charge” is small, the job requires that she visit a dog park where there are huge dogs. Pepper grows out of her fear of dogs and gets even closer to Dr. Hottie.

Rhett feels as if his life has been about unexpected losses, as he lost his mother to an allergic reaction to a bee sting, and his fiancée didn’t tell him that she outgrew him until the day they were supposed to marry. As such, it has left Rhett having a hard time with female relationships, but once he meets Pepper, he wants more than a one-night fling. While Rhett is a vet in IT HAPPENED ON LOVE STREET, readers don’t see too much of him in the clinic, as most of his interaction revolves around Pepper and his friend, Beau, as well as with the other townsfolks in Everland.

Just as things heat up for Rhett and Pepper in IT HAPPENED ON LOVE STREET, her sister, Tuesday, shows up and is immediately an interloper in her sister’s hot affair with the vet. It also doesn’t take long for Tuesday to lock horns with Beau, and I suspect their tale is the next one in the Everland, Georgia series.

One thing that did puzzle me in this story is Pepper’s aversion to dogs. Yes, it’s explained, but her “cure” is almost immediate. For someone who has feared dogs since she was a child, she suddenly grows attached to them, and even gets one of her own. I felt that this left a bit of a disconnection in the tale. 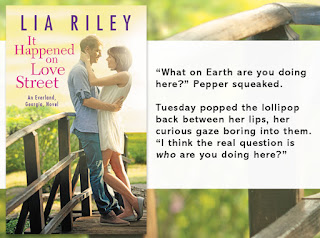 
“Here’s an idea.” He nudged his finger on hers. “Say we—and this is purely hypothetically—enjoyed the . . . ahem . . .pleasure of each other’s company in the privacy of ourhomes.”
“Hypothetically, kept it casual and under the radar?”
She nudged back. “When I leave, there’s no heartbreak, no drama, and no one is the wiser.”
“Interesting theory?” He reached out, his hand splaying her knee. “Or recipe for disaster?”
Tingles shot up her thigh. His skin was warm, those fingers very big and very male. “I have enough to worry about with my future. If you don’t need me for more than a little here and now? I might be persuaded. Hypothetically.”
He moved his hand from her knee to the back of her neck. The touch melted her faster than an ice cube in the July sun.
“What are you thinking?” she murmured.
His deep blue gaze locked on hers and there it came again, that curious sensation of floating and drowning. “That I’d like to hypothetically kiss you.”
There was a sudden roaring in her ears, a whoosh of blood. “Well, there’s only one way to test a hypothesis.”
Slowly, oh so slowly, he dipped forward. His lips didn’t settle on hers like she expected. Instead, he kissed the center of her forehead, softly, experimentally. A tremble rocked through him.
The evening air was sultry, no a hint of chill. The idea that she shook this steadfast man sent a shiver of need through the join of her thighs, a throbbing shudder that swelled to an ache as he peppered a light trail of kisses down her temple, and then moved lower. He took his sweet time on her cheeks, treating her as something to savor, a delicious dessert you didn’t want to wolf in one bite. Tension spread through her body, pulling tighter and tighter, her belly doing a fluttery dips and dives.
When he finally reached her lips, it seemed reasonable to expect that the kiss would be as soft as the others. Silly. Because Rhett was full of surprises. He didn’t hold back, his tongue was greedy, insistent, and hungry. Their teeth banged together. A chair tipped over. They crashed against a table leg, sent it screeching across the floor.
“In theory, you’re a good kisser,” she gasped, tracing her lower lip with her tongue. The skin was puffy, aching.


“Let me experiment a bit more. The initial results are promising.” 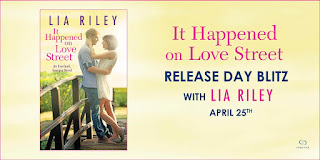