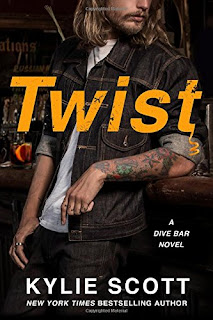 
When his younger brother loses interest in online dating, hot bearded bartender Joe Collins only intends to log into his account and shut it down. Until he reads about her.
Alex Parks is funny, fascinating, and pretty much everything he's been looking for in a woman―except that she lives across the country. Soon they're emailing up a storm and telling each other their deepest, darkest secrets...except the one that really matters.
When Alex pays Joe a surprise visit, however, they both discover that when it comes to love, it's always better with a twist.

After months of corresponding online, Alex Parks takes the huge step of travelling to Idaho to meet Eric Collins.  Alex has always shied away from relationships, preferring to keep her heart safe, but after signing up on a dating website, she met Eric, and what they’ve shared has her stepping outside her comfort zone and making the trip to his hometown to surprise him for his birthday.  She definitely succeeds, as Eric has absolutely no idea who Alex is.  After a bit of confusion, Eric’s brother Joe admits that when he tried to shut down Eric’s profile, he read Alex’s message, and has been e-mailing her ever since.

Alex hopes to get out of town as soon as possible, but a bout with the flu makes travel impossible.  An apologetic Joe offers to help, and though she feels betrayed by him, Alex reluctantly agrees.  Despite lying about his name, Joe is everything he claimed during their e-mail exchange, and even after she starts feeling better, Alex can’t bring herself to leave Joe just yet.

After being bullied throughout school, Alex built a comfortable life with a job that allows her to work from the home she rarely leaves.  Over the past few months, she’s come to enjoy the friendship with a potential future that she’s built with Eric and decides to take a chance.  Nothing turned out quite like she’d planned in TWIST.  At first it seems to Alex as if all her fears came true, but as she gets to know Joe—without the lies—she begins to let go of some of her fears.  For his part, Joe has often felt a bit overshadowed by his gorgeous, charming brother Eric.  Most women don’t see the oftentimes shallow and immature side of Eric, and Joe is often left cleaning up Eric’s messes.  He fully intended to shut down the correspondence with Alex, but she was so real and understanding that Joe found himself opening up to her about the insanity in his life.  Joe is still attracted to Alex, and with the lies out in the open now, he figures he has a chance to see where things could go between them.

Joe is the nice guy—dependable and always putting his own needs aside to help his friends, family or anyone else in need.  Alex is cautious—with one true friend, but on a first name basis with a lot of delivery guys—she has a hard time stepping outside of her comfort zone.  Together, they hope to balance each other out, helping the other to overcome their tendencies.  With a lot of laughs, and a little drama, Alex and Joe work their way into a relationship.

The Dive Bar series introduced readers to a group of lifelong friends who work together at the popular restaurant/bar.  The second book picks up pretty much where the first left off: with Lydia and Vaughan (DIRTY) making a go of things, and a very complicated relationship between Nell (Vaughan’s sister) who isn’t entirely over her ex, Patrick, but thanks to a drunken night is pregnant with Eric’s baby.  It helps to have read the first book to know some of the characters and backstory, but otherwise TWIST stands well enough on its own, and is a book you’ll thoroughly enjoy.

Sounds like my kind of book. Thanks for the chance! - Kim momof1dd

This is on my to by list! It looks really great. Thanks for the chance to win it.

Great review! Thanks for the chance to win