Book Giveaway: I DARED THE DUKE by ANNA BENNETT 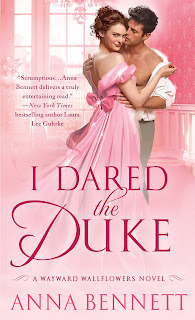 DARE TO FALL IN LOVE
Alexander Savage, the Duke of Blackshire, is known throughout the ton for three things: the burn scars on his neck, his ornery disposition, and the trail of broken hearts behind him. None of which would concern Miss Elizabeth Lacey in the least―if she weren’t living under his roof. As his grandmother’s companion, Beth is all too concerned with the moody and compelling duke. Incensed by his plans to banish the sweet dowager duchess to the country, Beth refuses to do his bidding. If Alex wants her help, he’s going to have to take her dare…and grant her three wishes.
Alex adores his grandmother, which is precisely why she must leave. A string of unfortunate incidents has him worried for the safety of everyone around him―including the dowager’s loyal and lovely companion, Beth. But the notorious wallflower isn’t as meek as she appears, and as their battle of wills heats up, so does Alex’s desire. He’s dangerously close to falling in love with her…and revealing secrets he’d rather keep hidden. How can he convince her that his darkest days are behind him―and that, for the first time in forever, his heart is true?
I Dared the Duke continues Anna Bennett's Regency-era romance series, The Wayward Wallflowers.

Elizabeth (Beth) Lacey’s uncle was a friend of the Dowager Duchess of Blackshire, so when the duchess said she wanted a companion since her niece has married, he offered the services of his granddaughter, Beth. Beth is one of three sisters society calls the 'Wilting Wallflowers.' Since her sister Meg has married an earl, the family is not in such dire financial straits. Beth, though, is a caring person who likes to help, so she agrees to be the dowager’s companion staying with the old woman in the duke’s townhouse, at least until the duke suddenly returns to town and confronts Beth.

Alexander Savage, the Duke of Blackshire, loves his grandmother. When as a child he was badly burned in a fire that killed his mother and father, she had cared for him, talking to him during endless hours of incredible pain and making him cling to life. He does not, however, want her in his townhouse right now, nor upon first meeting does he like her companion, an argumentative and opinionated, although beautiful, woman. Plus, the label, ‘Wilting Wallflowers,’ came from an off-the-cuff comment he made, something Beth doesn’t know. While he feels bad about that, she can’t stay. Bad things are happening to Alex, and he doesn’t want whoever is doing these reprehensible deeds to harm his grandmother.

The interactions between Alex and Beth are funny as both try to manipulate the other, which leads to their mutual attraction. Alex is not quite the rake gossip claims, and Beth certainly doesn’t fit the ‘wallflower’ remark he regrets making. Matter of fact, she is the only type of woman he discovers he wants for life. He has a long road to travel to get there with someone planning his demise and Beth’s sisters thwarting his goal. Older sister Meg’s story was featured in MY BROWN-EYED EARL, and readers can look forward to younger sister Julie’s story.

Note: there will be THREE contests posted this weekend.
at April 29, 2017

I'd love to continue Anna's series. Thanks for the post and giveaway.

This one sounds really good. Thanks for the giveaway.

Sounds awesome! Thanks for giving us a chance to win this great book.

This is a new-to-me author--how fun!