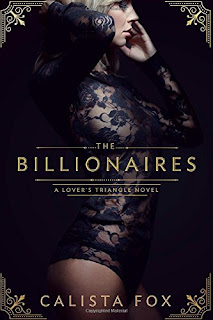 In The Billionaires, Calista Fox delivers a sexy and sensuous friends-to-lovers tale with a delicious love triangle twist.
Jewel Catalano, Rogen Angelini, and Vin D'Angelo had been childhood best friends, spending every possible moment with one another. Rogen became her first love, the first one to show her what pleasure could be. Until a volatile feud erupted between their powerful California wine country families and she and Rogen were torn apart from each other. What she didn't expect was to find comfort and passion like she had never known in Vin's arms and bed. But when that too ended in disaster, Jewel moved to San Francisco to work for the Catalano empire. Years later, a series of daring acquisitions brings Jewel back to River Cross, the hometown where Rogen and Vin have recently returned as well. Jewel has the curves, the smarts, and the success to bring any man to his knees―especially the two men who remained best friends and still burn to possess her.
Mixing family business with erotic pleasure ignites a smoldering love triangle. But in order to pull off the bold deal that will build the trios’ own legacy and to stay in their heady, sensual paradise, they must discover what true love really is―or lose everything their hearts' desire, in The Billionaires by Calista Fox.

Jewel Catalano, Rogen Angelini, and Vin D’Angelo had been childhood friends, but they drifted apart as they grew older. Jewel and Rogen had been dating before he was sent to boarding school, and then she started dating Vin, but that ended abruptly without any explanation from Vin. Jewel is an entrepreneur who wants to build an inn on nearby land owned jointly by her father and Rogen’s father. However, the two older men have been feuding for years, and getting Rogen’s father to agree to sell it to her could be impossible. However, Jewel is determined and crashes an Angelini party, where not only does she pitch her idea, but she runs into both Rogen and Vin.

Sparks fly once again with Rogen, and before the night is over, Jewel is having sex with him, during which Vin walks in on them. The next day at a meeting Rogen has called together to discuss the idea, Vin and Jewel have a confrontation that ends with her having sex with him in the restaurant bathroom. Jewel is attracted to both men, but how is that possible? She’s aware of the rumors that they have been involved in threesome relationships, but why is she interested in wanting the same with them? Soon, Jewel is challenging Rogen and Vin to have sex with her…at the same time. To her delight, they accept. But is there any future in a ménage relationship while trying to build a business partnership also?

Spicy hot like a Habanero pepper, THE BILLIONAIRES features three people who have been closely entangled since childhood and now are about to embark on a sexy adventure. The Catalano and Angelini families were close as Jewel and Rogen grew up, but when his younger sister died from cancer, it all changed as accusations were thrown around by the adults accusing the other of taking advantage of grief to profit themselves. Rogen and Jewel were involved romantically by then, but his parents yanked him out of school and sent him to boarding school, forbidding him to see her. Jewel then struck up a friendship with Vin, which turned sexual. But due to some misunderstandings, that affair ended, and none of the three have been in contact since…until now.

Jewel’s reunion with Rogen is bittersweet because their parents’ feud is still going strong. Rogen lets her know that while his father has agreed to her elaborate business proposition where she obtains a rare bottle of wine for him in exchange for his turning over his share of the property, he knows that his father will betray her in the end. Rogen offers to help her and wants Vin to be in on the deal, but the other man refuses at first. There is a lot of anger in Vin directed toward Jewel and she isn’t sure why. Is he jealous because she had sex with Rogen? While Jewel feels at first that Rogen is the man for her, she can’t forget about Vin. Instead of choosing one, she intends to have both.

If you love hot men, hot sex, and a tantalizing storyline, then grab a copy of THE BILLIONAIRES and be prepared to be entertained.

Post a comment in order to be entered in a chance to win a copy of this book. Open to U.S. mailing addresses only.
at April 30, 2017

Thanks for the chance to win.

Hm. Intriguing--thanks for the intro to this one by Calista!