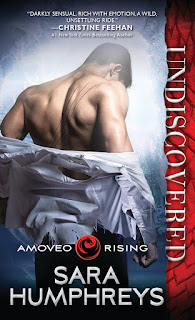 He’s the man of her dreams
A long time ago, Zander Lorens was cursed to walk the earth stripped of his Dragon Clan powers. Every night, trapped in a recurring nightmare, Zander relives his darkest moment. He can hardly believe it when the dream changes and a beautiful young woman appears. Zander believes she’s the key to ending his torment. Finding her in the real world is one thing, but how will he convince her of who—and what—she really is?

She’s the end to his nightmare
Rena McHale uses her unique sensitivity as a private investigator, touting herself as a “human divining rod” and finder of the lost. By day she struggles with sensory overload, and by night her sleep is haunted by a fiery dragon shifter. Nothing in her life makes sense, until the man from her dreams shows up at her door with a proposition…

Rena McHale stood at the center of the small office with broken glass littering the wooden floor around her feet, seemingly unaware that her eyes had shifted. An Amoveo would never allow their clan eyes to be seen by a stranger who was presumably a human.
“You’re bleeding,” he blurted out.
“Damn it,” she hissed.
She had blood dripping from her right hand and the other was balled into a fist, ready to fight. Rena McHale was every bit as beautiful in person as she had been in the dreamrealm.
Scratch that. More so. The woman was breathtaking.
Chestnut-colored hair cut in a chin-length bob and highlighted with bright-red streaks framed the determined expression on her oval-shaped face. Irritation and a hint of surprise danced in her brown eyes, which were flecked with gold. She was dressed in a simple blue suit with a crisp, white shirt unbuttoned just enough so he could see the curve of her cleavage.
“Staring at my boobs after you barge into my office is a ballsy move, my friend.”
Zander flicked his gaze back to hers, and the moment their eyes locked, it sent a shock straight to his dick. Son of a bitch. That’ll wake a man up. He bit back the urge to swear out loud. The woman was bleeding and he was ogling her like a creep. He made a mental note to keep his eyes on her face.
That wouldn’t be a problem.
“Sorry,” Zander murmured. He took a step back and raised both hands as if in surrender but pointed at the blood dripping onto the floor. “You want some help with that, or do you just wanna bleed to death?”
She sighed. “That seems a little dramatic.”
She arched one dark eyebrow and stepped over the broken remnants of what looked like a glass of water before grabbing a roll of paper towels off a file cabinet. She tore off a large wad and immediately pressed it to her wound while eyeing him warily.
“How can I help you?”
“You might need stitches,” he said quietly. “There’s a lot of blood.”
“It looks worse than it is. I’ll throw a couple of butterfly bandages on it.” She gave him a quick once-over but didn’t make a move toward him. “I heal like a champ, but thanks for your concern.”
He bet she did. Amoveo were known for their ability to heal swiftly. Even a hybrid like Rena would enjoy that particular gift. A hybrid. He still couldn’t wrap his brain around this piece of the puzzle. His brows knit together as she pulled a first aid kit from the bottom file cabinet drawer and swiftly tended to the cut on her hand while keeping one eye on him.
When had the Amoveo started breeding with humans, and why the hell doesn’t she know what she is? Where were her people? He glanced around the office. There were no personal pictures anywhere. It was sparse and strictly business.
This was going to be more difficult than he thought.
“Do you always barge into people’s offices, sir?”
“Only when I hear a woman scream.” He dropped his hands to his side and kept his voice low. “Breaking glass and screaming don’t usually bring good news.”
“True,” she said with a small smile. “Now that you know I’m not a damsel in distress and only a little clumsy, tell me who you are and why you’re here.”
“It’s my brother.”
“Hold on.” Rena tossed the bloodied paper towels and bandage wrappers into the garbage can next to the desk. “Let’s start with your name.”
“Zander.”
She smirked and gingerly smoothed the bandage over the side of her palm. “Last name?”
“Lorens.” He stuck out his left hand and slowly closed the space between them. The light, sweet scent of pears wafted over him, and he couldn’t help but breathe a little deeper as he got closer. It was a stark contrast to the city she lived in. “Zander Lorens.”
Rena shook her head and laughed while waving her injured right hand. He stilled as the light, musical sound of her amusement hit him in seductive waves. His gut tightened with need, which was disarming and disconcerting.
“Right.” He cleared his throat, quickly dropping his arm. “Sorry.”
Just as well. What was he thinking? Touching her would not be a smart move. Zander’s body was sending signals that were confusing the hell out of his brain. He would keep his distance. Nature had messed up once before and it was up to him to make it right. 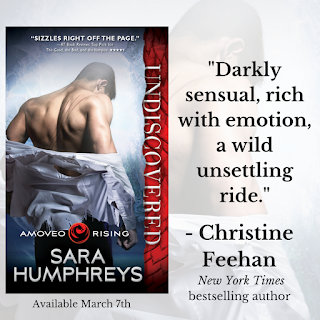 Sara Humphreys said…
Thank you for hosting me!
11:42 AM