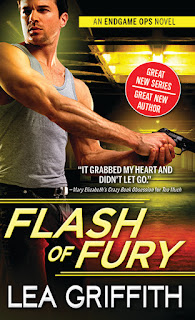 Their spark is immediate
Kingston McNally lost men when someone betrayed his team, and now he’s out for retribution. His quest for the enemy’s courier leads him to Cameroon and Allie Redding, a petite Peace Corps volunteer as stubborn as she is brave. Their attraction is immediate, but Allie has secrets of her own…and she’s not giving them up easily.

But their secrets could burn them both
Allie’s life has been spent hiding in plain sight, but she’s had enough of her cloak-and-dagger existence. On her way home, her plane is hijacked—and King saves her life. But that doesn’t mean she owes him anything…even if he is the most damnably sexy man she’s ever laid eyes on. He’s got black ops and secrets written all over him, and trust is a two-way street.

Lea Griffith has been reading romance novels since a young age. She cut her teeth on the greats: McNaught, Woodiwiss, and Garwood. She still consumes every romance book she can put her hands on, and now she writes her own compelling romantic suspense. Lea lives with her husband and three teenage daughters in rural Georgia. Website | Twitter | Facebook

LETTER TO THE READERS

Hello, Readers! My name is Lea Griffith and I’m here to tell you a little bit about myself and my upcoming release, Flash of Fury, the first full-length story in my Endgame Ops series. Where should I start? How we start with some personal stuff? Everybody likes personal stuff, yeah?
Okay, here we go—you get five personal facts though to be honest I’m long-winded so I’ll say five but it will probably end up being lots more. Sharing is caring, lol.

And now that I’ve given you deets on me, let me bend your ear (or would that be your eyes?) about my Endgame Ops series. If you like your heroes incredibly alpha and you like your heroines strong enough to take them on and give it right back, I think I’ve got a few stories cooking for you.

Suspense, heat, and overwhelming connections abound as you enter a world of shadows and intrigue. Each story of my Endgame Ops series brings you closer to a truth you may not be able handle. So watch your step because danger is around every corner and Endgame’s story is just beginning with my upcoming release, Flash of Fury. Let me introduce you to King and Allie. Prepare yourself.

Kingston McNally lost men when someone betrayed his team, and now he's out for retribution. His quest for the enemy's courier leads him to Cameroon and Allie Redding, a petite Peace Corps volunteer as stubborn as she is brave. Their attraction is immediate, but Allie has secrets of her own...and she's not giving them up easily.

Allie's life has been spent hiding in plain sight, but she's had enough of her cloak-and-dagger existence. On her way home, her plane is hijacked-and King saves her life. But that doesn't mean she owes him anything...even if he is the most damnably sexy man she's ever laid eyes on. He's got black ops and secrets written all over him, and trust is a two-way street.

Flash of Fury is a fast-paced, action-packed story of survival and how in the midst of the most harrowing circumstances, love can find a way to sneak in and knock you on your behind. With both of them hiding secrets, they’ll have to find a way to survive terrorists and each other.

I hope, with everything in me, that you enjoy reading it as much as I enjoyed writing it.

Now what are you waiting for? Go read ALL THE WORDS!

PS It’s your turn to tell me a little about you—fave authors? Fave reads? Are you still sane? Remember, sharing is caring.

EXCERPT
Allie feared she wasn’t going to make her flight, and damn but she really needed to be on that plane. She weaved through the throngs of people in the main terminal, dodging hysterically crying children and obstinate old folks, and trying not to knock down anyone else who refused to get the heck out of her way.
“Final call for Air France flight 1701 to Paris, France, boarding now,” the gate hostess said in a lilting, accented voice over the intercom.
Allie was flying to Paris and then catching a flight to DC. Home was eighteen hours away if everything connected properly. She pushed her heavy blond hair out of her face, breathed deeply, and smiled at the woman as she handed her the boarding pass. The woman shooed her through. So close to home. Exhilaration pumped through Allie’s body, a sweet, cooling relief. She pulled her carry-on behind her down the loading ramp. The tick, tick, splat of rain on the dock’s tin roof reminded her that it was monsoon season in Cameroon. She definitely wouldn’t miss the rain. The people were a different story. She’d miss them like crazy. But she’d be back.
She stepped into the plane and nodded at an attendant.
“Welcome aboard, mademoiselle,” the flight attendant said with a smile.
She would miss that too—the sound of French and all the beautiful dialectal diversity in this country. But home called and she couldn’t wait.
Visions of manicures, pedicures, and McDonald’s french fries danced in her head as she practically skipped down the aisle of the 747.
Allie found her seat, lowered the handle of her carry-on, and was beginning to lift it to the overhead compartment when a large, tanned hand covered hers and took the bag.
Shock—that was the word that came to her mind. The man had shocked her, a current running from his hand to hers. Allie shivered.
“Let me help,” a deep voice rumbled. The man had been seated in her row next to the window. She’d noticed him at a distance as she walked down the plane’s center aisle.
Now, she sighed in relief, grateful for his presence as she allowed her gaze to drift up the man’s arm, to his neck, to his…sweet little baby Jesus in a manger…his face.
He was quite possibly the hottest man she’d ever seen. She stood there in awe as she took in his mink-brown, wavy hair. Her palms itched to brush it from his eyes. High cheekbones balanced a square jaw darkened by a five-o’clock shadow.
Her gaze lowered, once again noticing the strong column of his neck and the breadth of his chest, the width of his shoulders. She had the irrational urge to raise her hand and request permission to continue staring at him.
Then she slammed right into his gaze, and Allie almost swallowed her tongue. His eyes were the green of an Irish hillside and his lips, curving at her perusal, begged sin. All kinds of hot, sweaty, lick-me-all-over, then-dive-back-in sin. The thought had her stepping back.
His eyes smoldered before he blinked. That single instant of reprieve allowed her to get her shit together—okay, almost together.
“Thanks,” she murmured as she quickly sat her behind in the aisle seat of her row. She tried to concentrate on breathing evenly. The sexy bastard had stolen the oxygen from her lungs. Allie wasn’t a believer in insta-love, but insta-lust? She’d just become very familiar with that concept.
“We’ll be leaving shortly. Please make sure your seat belt is securely fastened and all carry-on luggage is stowed underneath the seat in front of you or in the overhead bins,” a flight attendant said over the speaker.
To distract herself from thoughts of Mr. Lick-Me-All-Over, who continued to stand in the aisle beside her, Allie focused on her go-to fantasy—McDonald’s french fries. She closed her eyes, imagining the crisp, salty goodness. She took a deep breath, and all thought of french fries disappeared. She smelled evergreens and mint. Her body tightened and she looked up.
“Excuse me,” Mr. LMAO said. The acronym had her snorting, to which he raised an eyebrow.
“Um,” she stammered. “Yeah?”
“Are you okay here?” he asked in a deep baritone that seriously rearranged pieces inside Allie’s abdomen. “If you are, I need to get past you to my seat.”
His hand rested on the seat behind her head, and as she moved so as not to crane her neck, her cheek brushed his hand.
The zing she felt in the pit of her stomach was ferocious. More like a lightning bolt. Similar to the jolt she’d experienced earlier, only way more intense. She really didn’t need intense right now. Fries. She needed fries.
“Uh, well, okay?” She was a mess in the face of all that hotness.
He smiled, which the most beautiful thing she’d ever seen on any man—ever.
“I think what I’m asking,” he began and sighed as if he had the patience of Job, “is do you want the aisle or the window?”
She stared up at him, and his brows lowered. Then it hit her. “Oh! Aisle is fine, thanks,” she murmured as she started to stand so he could sit down.
His face tightened as if he’d argue, but then he brushed by her to his seat and there it was—the holy grail of backside views. She thought she heard angels singing and somebody yelling, “Hallelujah.” Allie shook her head. Her palms itched again, and she rubbed them on her jeans.


She couldn’t sit beside him. Not Mr. LMAO, with his minty, evergreen smell and his Irish eyes a-smilin’. No, no, no…
a Rafflecopter giveaway 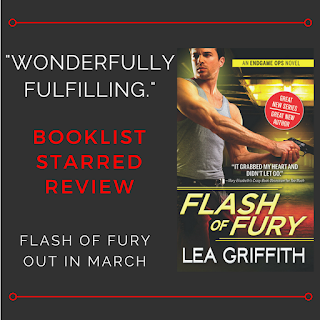