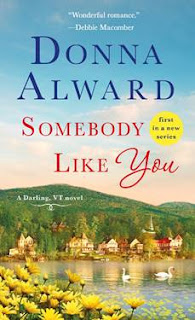 A kiss to last a lifetime
Aiden Gallagher was only five years old when he appeared in a photograph on the Kissing Bridge. The town of Darling, Vermont, has used Aiden’s image on the famed bridge―local legend has it that a kiss there results in everlasting love―as part of its tourism campaign. Now, twenty years later, Aiden is asked to recreate the moment with the woman he once kissed: Laurel Stone.
Recently divorced, there’s nothing Laurel wants less than to pretend happily-ever-after with Aiden. As teenagers, their romance was no fairy tale―and Laurel has never quite forgiven Aiden for breaking her heart. But now that she is back in her hometown, and keeps bumping into police officer Aiden, Laurel can’t deny that there’s still a strong flicker between her and her old flame. Could it be that the Kissing Bridge is working its magic on Laurel and Aiden―and that all true love ever needed was a second chance?

After Laurel Stone's divorce from a man who suddenly decided to come out of the closet, she returned to her hometown of Darling and opened a garden nursery. It's been hard work, but ultimately rewarding. One day she arrives at work and discovers that vandals broke in and destroyed just about everything. Aiden Gallagher is the police officer who responds to her call. There's a lot of history between Laurel and Aiden, one that began at the age of five when they were photographed as wedding attendants kissing, and it finally culminated with her feeling humiliated in high school due to a silly bet by Aiden and his friends. Darling is a small town and they're bound to run into one another, but Laurel hasn't forgiven Aiden. He keeps trying to break through the ice, and with the investigation, he finally has a chance to apologize.

Laurel has spent most of her life trying to please those around her. When her ex announced he was leaving her for a man, she just accepted it and walked away. She doesn't like to bring this up, but of course there are the whispers. The picture of her childhood kiss with Aiden has been used in the town's promo for its "Kissing Bridge" and now they want to redo it with the adult Laurel and Aiden kissing again. She firmly says no, but soon she is indeed locking lips with him---behind closed doors. Is their newly formed friendship now a romance? Or is she once again burying her head in the sand to avoid sharing her true feelings?

In a small town such as Darling, everyone knows you, and for Laurel in SOMEBODY LIKE YOU, she sometimes wishes this wasn't true. After years employed in an office she feels liberated working the nursey, nurturing plants and flowers. Laurel has kept things friendly with her ex because she didn't want to cause waves, but deep down she is hurt by what happened. When her ex asks for her help planning his upcoming wedding ceremony, she agrees, but inside she is seething with anger. Laurel must come to grips with the past before she can move on with her future. Maybe it means sometimes saying no…

Aiden is sorry for his idiotic behavior when they were seventeen. While some can blame it on a foolish teenage boy's behavior, deep down he was attracted to Laurel even then. The foolish boy grew into becoming a police officer and doing what is right. He even keeps an eye on a local homeless man, George, and provides the man food when he can. Aiden is trying to regain Laurel's favor again by stopping in to see her whenever he can. Their friendship slowly builds, as the sexual tension simmers just beneath the surface. Theirs is a small-town romance that will have readers hoping for a happily-ever-after.

SOMEBODY LIKE YOU is the first book in the Darling, VT series by Donna Alward and is a fabulous tale that I highly recommend. Laurel is trying to keep her true feelings about the past from coming out, but it's leaving her unable to move forward. Aiden is part of a past she'd like to forget, but she finally opens her eyes—and her heart—in SOMEBODY LIKE YOU to finally see the light. Their romance is fun, entertaining, and warmhearted. Grab a copy and sit a spell, as you won't want to put down SOMEBODY LIKE YOU.

Karielle Stephanie said…
Donna's romance novels are always sweet and this one looks like it has a very rich setting. Thanks for the giveaway!
3:58 AM

cheryl c said…
This sounds like a sweet and lovely romance.
9:18 AM