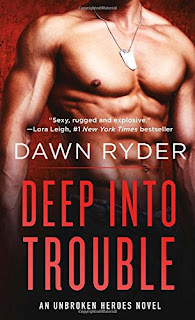 
Desire is more dangerous than anything in Deep Into Trouble, the next Unbroken Heroes novel from Dawn Ryder.
Saxon Hale lives for the hunt―taking down the bad guys, stopping them dead in their tracks. His latest mission has him in New Orleans, where people go for the party that never ends. But fun is the last thing on Saxon’s mind now that he’s a breath away from closing in on a vicious overlord known only as the Raven. Until an innocent young woman unknowingly enters the very deadly game…
Ginger Boyce is a librarian who’s growing tired of being so buttoned-up on the job, and when she attends a conference in the Big Easy, she decides to taste the wild side of life. But when her dance with darkness becomes lethal, she’s in dire need of protection―and ends up in the embrace of a man who radiates danger and desire. Soon Saxon finds himself Ginger’s shield against an enemy whose power they haven’t yet begun to face. But will he be able to keep his mind on his mission while the very woman under his care drives him beyond distraction?

DEEP INTO TROUBLE – Dawn Ryder
An Unbroken Heroes Novel , Book 3 St. Martin's Paperbacks ISBN-13:  978-1-250-07523-9 March 2017 Romantic Suspense New Orleans. Louisiana – Present Day Librarian Ginger Boyce is at a conference in the Big Easy and determined to have some fun.  When a break in the schedule lets her off early, she decides to buy a dress to blend in with the New Orleans vibe and meet a stripper she talked to the day before.  She told her she was going to a book signing and offered to get the woman a signed copy.  She was to go to a certain bar and ask for Kitten.  The bouncer directs her to a bar across the way, and when she explains again she's looking for Kitten, she sees something she shouldn't have.  A man who is called Raven is seen by Ginger killing another man.  Except the Raven is Marc Grog, a man supposedly dead for ten years and who used to be the former head of a media empire of political, wealthy and connected men.  When the men notice her in the room, she tries to run and is saved by several other men. Saxon Hale and his Special Ops group are on a lookout and know something is about to come down when they see innocent Ginger walk in the bar.  They barely rescue her, and can't believe her story that she actually saw a murder, knew the murderer was called Raven, and that the Raven is actually a criminal thought dead for ten years.  They have a package that could blow up in a minute when people find out they have Ginger, and going into hiding is now imperative. From place to place Saxon and his group are trying to hide out, but they know former operative Tyler Martin has gone to the other side and knows how they operate and where they would go.  Tyler is mixed up with a man running for president, and also Marc Grog, and is trying to play both sides for whatever influence he can get.  Which side will be successful, and how will Saxon handle his growing attachment to the sweet but spunky Ginger? Dawn Ryder surely amps up the explosive events in DEEP INTO TROUBLE as Ginger is the only witness to a murder and also a “dead” man.  The government wants her for her testimony, the man who committed the murder wants her, and Tyler Martin, former fellow operative of Saxon, wants her.  Tyler is working for the other side, Special Ops doesn't provide him with the money he feels he deserves.  Tyler is trying to complete his job for maybe the next President of the United States, Carl Davis.  Carl needs the media attention Marc Grog's company can give him, and Tyler is hoping to be Carl's main agent for his security when he's elected.  Tyler knows how Saxon and his group work; it will be nothing to eliminate the woman, and the ops team if he has to. Secondary characters are Kagan, head of the Special Ops group, trying to play both sides against the middle as everyone knows his group has Ginger, but whom will he reveal her to?  Saxon's brother Titus is brought into the mission, and several other men work as a unit to do what needs to be done. DEEP INTO TROUBLE is full of excitement and pulse raising actions every minute.  Ginger is stronger than Saxon thinks she is, and earns his respect from the first.  Ginger knows Saxon is a very follow-the-rules kind of guy, and tries to keep everything professional between them, but, much to his chagrin, he has no chance of ignoring Ginger's charms.  Who will find Ginger, and will she make it out alive, or will Saxon give his life to save hers?  This journey of politics and dirty games will keep you turning pages.  DANGEROUS TO KNOW (March 2016), and DARE YOU TO RUN (August 2016) are previous books in the series, but DEEP INTO TROUBLE is a standalone story full of enjoyment. Carolyn Crisher

Want to win a copy of this book? I have a question for you... where do you buy most of your books?
Post a comment and you'll be entered in a chance to win DEEP INTO TROUBLE.
Open to U.S. mailing addresses only.

PaulaP said…
I buy most of my books at Walmart and Amazon. Thanks for the contest.
7:51 AM

Karielle Stephanie said…
Amazon for new books if I'm giving a gift. If I'm just buying for myself, I like to go to indie used bookstores because 1) it's more affordable and 2) I love supporting local!
2:49 PM