Promo: Review and Giveaway: HIS BALLERINA BRIDE by Teri Wilson 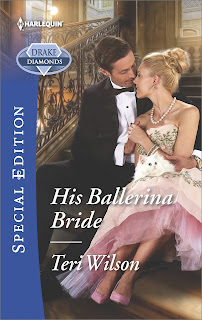 Bachelor CEO Artem Drake doesn’t really want to run Drake Diamonds, but after his father’s recent death, he had no choice since he was designated to lead the company. Drake Diamonds is losing money and may need to sell a legendary diamond tiara to help raise cash. One day while visiting the store, Artem encounters sales associate Ophelia Rose—and he’s instantly smitten with her. She seems shy around him and doesn’t reveal too much about herself, but it only makes him intrigued by her even more. When Artem learns that Ophelia drew up some beautiful jewelry designs, he’s determined to use them to help save the company. Or is it because he’s attracted to her?

Ophelia isn’t telling Artem about her past because it’s still raw to talk about it. She used to be a star ballerina—until she was diagnosed with multiple sclerosis and forced to leave her career due to the devastating symptoms she was experiencing. Ophelia is now in remission and designing jewelry on the side from her job at Drake Diamonds. When Artem catches her nibbling on customer food goodies, she’s embarrassed, even as she’s charmed by the debonair man. His enthusiasm for her designs lead to two unexpected happenings: getting involved with Artem and once again being in the public spotlight.

Artem and Ophelia experience an instantaneous attraction in HIS BALLERINA BRIDE. For Ophelia, the ballet was her life until her MS diagnosis. To be unable to perform devastated her and she slunk away from the spotlight feeling unworthy. She found a new career selling diamond jewelry at Drake’s Diamonds, and while she didn’t plan to spend forever doing it, she is content. But Artem’s entrance into her life changes everything. The chemistry between them is hot and she tries to resist the attraction, but it cannot be ignored.

Meanwhile, Artem is trying to figure out how to get out of running the company, a job he never wanted. He is not the oldest son and is in fact the illegitimate son. Everyone expected his older brother, Dalton, to take over after their father’s death, but the old man changed his will a week before he died, with the stipulation that Artem run Drake Diamonds. Artem would rather be a carefree bachelor than a tied-to the-desk CEO and Dalton refuses to listen to Artem’s offers to resign. Meeting Ophelia changes everything, from the instant attraction to discovering she designs jewelry. After he tells her that the company is in financial troubles and is planning to sell the famous diamond tiara, she shockingly is opposed to it. Why is she attached to the tiara? In HIS BALLERINA BRIDE, readers will learn there is a connection between Ophelia and the tiara.

Ophelia and Artem’s romance is unexpected for both and it turns HIS BALLERINA BRIDE into a sweet read with a side of sensuality. Her illness will tug at your heart and his insecurities in being CEO will garner sympathy. Grab a copy of HIS BALLERINA BRIDE for a terrific read.

I have never read her but the story sounds very sweet.
Natalie's Mama