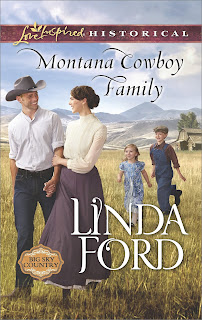 Sadie Young has a secret, one her parents blamed her for, rather than the real perpetrator. But now she's found a home in Bella Creek. The town suffered a fire that burned a whole block, including the school. After the old teacher left town, Sadie became the new one. She teaches in the back of the general store that is across the street from the school, which is now under reconstruction by Logan Marshall.

Logan is a member of the founding family of the town, taking timeout from ranching to do something for the town his grandfather founded. When his lunch is stolen two days in a row, he watches out for the thief. He finds him in the person of a seven year-old boy.

Sadie has been concerned over Sammy Weiss and become even more so when she learns that he and his two sisters have been abandoned in a rundown old house with no food. Their mother recently died, and there is no sign of their father. Sammy and his three year-old sister, Jeanie, are being cared for by their older sister, Beth, only thirteen and frightened.

Sadie welcomes the three children into her heart and her home. Logan's heart is closed to women after two bad experiences, but he finds a place for the kids and tries to help Sadie with them. First on his list is to find their missing father. But somehow, the children don't want him to be found.

Much against their wills, Sadie and Logan come to admire each other. Can anything develop between two who have sworn off such things? What becomes of Beth, Sammy, and Jeanie?

Suspenseful and heartwarming, MONTANA COWBOY FAMILY is an uplifting read. It follows MONTANA COWBOY DADDY, one of Logan's brother's tale. And he has another brother and a sister. This bodes well for future entertaining reading.