Promo and Giveaway: THE TYCOON’S SECRET CHILD by Maureen Child 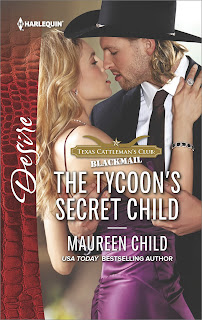 Texas billionaire Wes Jackson is on the brink of securing a partnership with another company when he receives an anonymous email indicating he fathered a child he didn’t know about. The attached pictured of the little girl in the email indicates that she must be the daughter of his former flame, Isabelle. His partner in the proposed merger reacts to the news by backing out of the deal, which leaves Wes desperate to find a way to win him back and also find his daughter. It didn’t take long for Wes to locate Isabelle, and he’s soon on a plane to Swan Hollow, where he confronts her. She doesn’t deny she had his child, but states she didn’t tell him because he made it clear he never wanted children.

Isabelle “Belle” Graystone is protective of Caroline, not only because she has raised her as a single mother, but because Caro is deaf. The arrival of Wes throws her for a loop because being around him rekindles the attraction she once felt for him. Wes’s priority has always been his work, and Belle isn’t going have him waltz into Caro’s life, only to have him walk away. He agrees to keep his true identity from his daughter, but spends the next several days getting to know her. It doesn’t take long, however, before Belle and Wes are back in each other’s arms.

Five years ago, while working for Wes, Belle fell head over heels in love with him. But during a time of passion, she blurted out “I love you” to him and he made it clear he would never love anyone. She walked away, her heart broken, and never told him she was pregnant. Wes never exactly forgot her, but he had vowed to not give his heart to any woman after his mother died and his father became heartbroken. One look at Belle and his daughter has Wes rethinking things. But is it because becoming a family man would help in the business deal he’s still hoping to close?

Luckily for Belle, she not only has a large supportive family but the money to go with it and has provided well for herself and Caro. She started a charity project to help children and is impressed when Wes offers to help her. But is he just trying to butter her up? Her first responsibility is Caro, and she won’t have her hurt by a father who only wants to be there when it fits his plans. Yet, the longer he stays, the harder it is going to be for Belle to say goodbye. Book one of the Texas Cattleman’s Club: Blackmail, the series appears to be focusing on people who find about secrets that are about to be exposed.

With a deaf child at the center of THE TYCOON’S SECRET CHILD, it’s no wonder that it’s a beautiful and sensitive tale. Belle is the mother protecting her child, while Wes is discovering the wonders of fatherhood. Their coming together is a passionate reunion readers won’t want to miss.

Would love to win.
Thank you.
Natty's Mama

Sounds good to me as well.
ladbookfan813@gmail.com