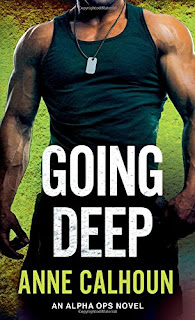 
SHE’LL ROCK HIS WORLD
After weeks on a sold-out tour, singer Cady Ward is coming home for the holidays. But after one too many episodes of fan-craziness, Cady’s manager decides that she needs protection―in the form of muscled cop Conn McCormick. Longing for peace and quiet to prepare before her next album drops, Cady doesn’t need a bodyguard just to deal with some vague email threats…though she can’t deny that close proximity to Conn’s body is a very nice place to be.
Conn is in the midst of a career scandal when his boss assigns him to pop-star guard duty. It’s a poor use of his skills, even though Cady’s feisty nature proves the perfect distraction for Conn while Internal Affairs investigates his case. What begins as a sizzling attraction becomes something deeper than either Conn or Cady could have expected. But when Conn uncovers the sinister plan behind the threats to Cady, he’s faced with a professional dilemma: To save her life, will he risk having a future with the only woman who’s ever touched his soul?

Conn McCormick is a Lancaster police officer, and tonight he is working security for a singer, Cady Ward, (or her stage name, Maud).  After the show he sees a drunk somehow get through to the back stage trying to accost Cady and talk to her, but Conn is able to cuff him and remove the guy.  The next day, Conn’s sergeant pulls him in the office to show him a picture of a man he had previously arrested, beaten up quite badly.  Conn can’t work until the matter has been investigated, especially since Conn has a history of a quick temper.  He has been to counseling, but his childhood lingers until today, causing him to need all his control when he gets mad.  A request from Chris, Cady’s agent, has Conn working as a bodyguard for Cady while she is in town with her family for the Christmas holidays. After the drunk getting backstage at the show, Chris thinks it might be wise to protect Cady, even if she is in her own hometown.

Cady Ward can’t wait to have several months off and live in her newly purchased home and spend time with her mother and teenage sister Emily, a budding clothes designer.  Having a bodyguard live with her in her house is kind of awkward, but Conn is one fine looking man.  It doesn’t hurt that Conn is tall and has shoulders to die for either.  Cady used to sing for free outside bars before Chris found her, and her first album was dynamite, and her year of concerts went well.  Now she has to come up with another awesome album, but it’s made up of other people’s songs.  Sure, she helped with them, but they just don’t feel like her.  How much money could be lost by the record company if she refuses to agree to release it?  Watching Conn tentatively connect with her mother and sister, Cady notices he always holds himself apart, as though he doesn’t belong.  Then her beloved bracelet from her grandmother and her song writing books are stolen from her house, and Cady is suddenly afraid someone is after her.

Against Cady’s wishes, Conn installs security cameras to find out who is causing her to feel afraid at her own house.  Conn also is investigating the beating of the man he arrested, and information from an unexpected source leads him to looking at someone he never would have thought of.

Anne Calhoun goes deep into the anger that makes Conn who he is, always used to moving if one relative or another was tired of taking care of him, one foster family after another.  Conn never feels as if he belongs anywhere, and love is the last thing he thinks he will ever receive from anyone.  Conn’s heart constantly aches with the feelings of disconnection from the world of families; it’s something he can’t escape from, just like he can’t escape from his father’s record at the track.  His father left him as a teenager, leaving behind a 1969 Camaro ZL1 and the 9.99 record he left behind at the local race track.  Shane is the owner of McCool’s Garage, and spends hours on Conn’s car.  Conn has made himself his father’s weight, has only the same weight on his car, but still can’t beat 10.0 at the races.  Cady is riding high in her fledgling career, a great first album, and just coming off a long tour.  The only thing not making her happy is the album Chris and the publishing company want her to release, songs not written by her and just lukewarm to her, not her own words at all.  Perhaps this break will let her think what direction to take in her career.

Secondary characters are Emily, Cady’s sister, and Shane, Conn’s best friend.  Sergeant Hawthorn is Conn’s superior, and he’s not sure if Conn beat up the arrested man or not.

GOING DEEP goes into the hearts of Conn and Cady as they each learn what makes the other tick.  Conn is still stuck into the single accomplishment of his father before he left him, and Cady is trying to find which direction to take her career—what others want or what she wants.  These are two strong people who will also have strong feelings for each other.  It is exciting to see if Conn can let go of the past and reach for his future—with love in his life.

Buy a copy at Amazon

flchen1 said…
Ooh, I've heard great things about Anne's series--thanks for the peek at this latest!
10:15 AM