I welcome you to Blessings, Georgia, the best small town in the South.
No, there aren’t any secrets kept here, and yes, everybody knows your business, but when bad things happen, good people come to your rescue.
I grew up in a place like that—-a place everyone should live in at least once in their lives, but since that’s not possible, I’m offering the next best thing: stories about that way of life—-touching stories, funny stories, stories that will break your heart on one page and heal it on the next.
Count Your Blessings was the novella introducing my readers to the Georgia landscape.
You and Only You was the first full-length novel set in     Blessings. It’s a story about the faithfulness of friends and family and what it means to be Southern to the core, as well as being a sweet love story to enjoy.
I’ll Stand By You was the second full-length novel. It’s a story about how people starting life off on the wrong foot can still find a way to live happy ever after.
Saving Jake is the next story, the one you’re holding in your hands. It’s a story that gets to the heart of what matters in life: redemption, forgiveness, and trust. It’s a story of the times, and yet timeless in its simplicity.
Pick up one of my stories and take a visit to Blessings with me.
You just might like it enough to stay.

See you between the pages, 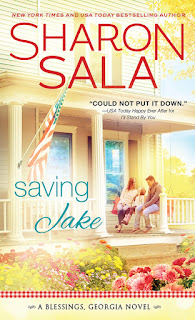 There is always hope
After eight years in the Marines, Jacob Lorde returns to Blessings, Georgia, with no plans other than to hole up in his empty house and heal what’s left of his soul. But with a charming next door neighbor and a town full of friendly people, keeping to himself is easier said than done.

As long as you can come home
Laurel Payne understands far too well what Jake is going through, after witnessing her late husband experience similar problems. She’s in no hurry to jump into another relationship with a complicated guy, but their attraction is undeniable—and perhaps exactly what both of them need.

SHARON SALA has over ninety-five books in print and has published in five different genres. She is a seventime RITA finalist, four-time Career Achievement winner from RT Book Reviews, and five-time winner of the National Reader’s Choice Award. Writing changed her life, her world, and her fate. She lives in Norman, Oklahoma. 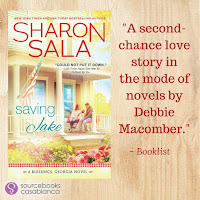