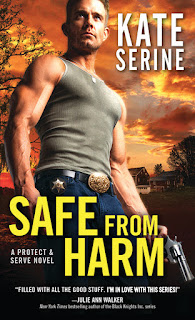 It's All Harmless Flirting Until Someone Gets Shot...

Deputy Gabe Dawson has had his eye on prosecuting attorney Elle McCoy for years. But the smart, sassy redhead is immune to his legendary charm and good looks--until Gabe is shot on the courthouse steps protecting Elle from a vengeful domestic extremist.

Elle has been protecting her heart from the cocky playboy cop. But it's hard not to notice a guy when he takes a bullet for you and seems determined to turn his life around. With terrorists still at large and Elle a target, Gabe and his law enforcement brothers kick into high gear to take down the threat. And as they work together, Elle realizes she's losing her heart to a man who will risk it all to keep her safe from harm.

Kate SeRine writes award-winning romantic suspense and paranormal romance. A past recipient of an Emily Award and the National Readers Choice Award, she has also been a finalist in the Fire and Ice Contest, Finally a Bride Contest, and the Gayle Wilson Award of Excellence. She lives with her husband and two sons outside Indianapolis, Indiana. Connect with Kate at www.kateserine.com.
Buy Links:
Amazon
Books-A-Million
Barnes & Noble
Chapters
iBooks


LETTER TO THE READER
To my readers,

I’m so excited to share Gabe and Elle’s story! Sparks were flying between these two in Stop at Nothing, so I couldn’t wait to bring their relationship to readers. I love these characters—from their flirtatious banter to their deeply emotional moments and everything in between.

Sexy and movie-star handsome, Deputy Gabe Dawson is the golden boy of Fairfield County. With a generations-long family legacy of law enforcement and a single-minded determination to reach the top, Gabe’s career promises to eventually eclipse even that of his famous father. All this makes him one of the most sought after bachelors in town. But the one woman Gabe truly wants doesn’t want anything to do with him.

There’s something about prosecuting attorney Elle McCoy that Gabe just can’t get enough of. She’s beautiful, brilliant, and the sexual tension between them every time they’re in the same room can’t be denied. But her snarky rejection of his charm makes Gabe want her even more. Not used to being turned down like a hot stove, Gabe hopes Elle will eventually give him the chance to show her he’s more than his reputation.

Elle’s had a crush on Gabe Dawson since she was a gangly teenager but was convinced he’d never give a girl like her a second glance. So now that they’re adults and she’s witnessed the famous Dawson charm in action, she doesn’t trust his flirtations—especially considering Gabe’s reputation as a womanizer. But when he takes a bullet for her, his self-sacrifice causes her to take a closer look. Soon she discovers the man he truly is and realizes what was once a schoolgirl crush is now so much more.

I really loved exploring Gabe and Elle’s evolution from frenemies to lovers, and I hope readers enjoy their playful, sultry interactions as much as I enjoyed writing them. But in addition to the romantic story central to the novel, is the story of love and family—regardless of whether that family is related by blood or bound together by loyalty and shared experiences. Exploring these complicated dynamics was an incredible experience and resulted in some of my favorite scenes in the novel.

There’s so much that I loved about writing Safe From Harm, and I’m thrilled to be able to share it now with all of you. Happy reading! 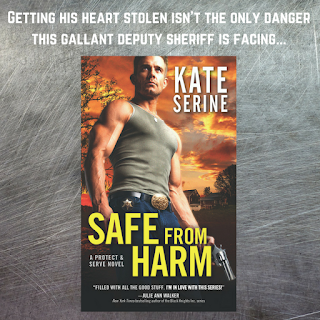