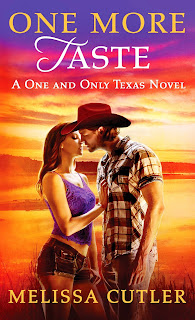 Melissa Cutler, author of One Hot Summer is back and ready to quench your thirst for romance with her new novel ONE MORE TASTE(St. Martin’s Paperbacks; October 4, 2016; $7.99), where one man will discover that revenge is a dish best served sizzling hot…
Welcome to the Briscoe Ranch Resort, where love is always on the menu.
Chef Emily Ford has the talent and ambition to make it in the cutthroat culinary world—which is why she refuses to accept her demotion at the hands of Knox Briscoe, the new CEO of Briscoe Ranch Resort. He has grand plans that include bringing in a celebrity chef to helm an exciting new restaurant at the resort, but Emily has plans of her own—to do whatever it takes to change his mind…
Cut out of the Briscoe fortune by an old feud that left his family in ruins, Knox grew up dreaming of revenge. Out-maneuvering his uncle for control of Briscoe Ranch is merely the first step in a grand plan that doesn’t include the brazen and beautiful Emily Ford…or the attraction that sizzles between them. With both their futures on the line, can they keep their desires on simmer—or are they headed from the frying pan straight into the fire?

ABOUT THE AUTHOR: Melissa Cutler knows she has the best job in the world writing sexy contemporary romances and romantic suspense. She was struck at an early age by an unrelenting travel bug and is probably planning her next vacation as you read this. When she's not globetrotting, she's enjoying Southern California's flip-flop wearing weather and wrangling two rambunctious kids.

A knock sounded at the open door. Everyone turned, relieved at the distraction. A woman Knox would recognize anywhere filled the doorway, a folder clutched in her arms and a hard-set look of determination on her face. Chef Emily Ford.
***
“Ty told me about you. You’ve worked at this resort since right out of culinary school a decade ago. No internships, no stints as a sous chef at a celebrated restaurant, nothing remarkable, not even a chef competition show on TV. Your whole career, you’ve been here at Briscoe Ranch, laboring in obscurity. If you’re so talented, then why have you been holding yourself back?”
He watched the shift of her weight from one foot to the other, the extra squeeze she gave the folder in her hand. He’d hit a nerve. Good. Turnabout was fair play.
“I’m not holding myself back. All the years I’ve worked here, laboring in obscurity”—she said with a scoff—“I’ve had the freedom to cook what I want, every dish completely original instead of imitations of more prominent chefs or attempts to pander to critics’ fickle tastes. Over the last decade, I’ve risen from a graveyard-shift line cook in the room service kitchen to the executive catering chef, one of the principal roles at the resort.” She spun the folder onto his desk and speared a finger on it. “A few months ago, Ty agreed to my proposal to open a high-concept, signature restaurant at the resort. Subterranean, I’m going to call it. We were in the process of securing funding when you showed up and ruined everything.”
He took a step nearer to her, then another, stopping just short of arm’s length. This close, those freckles on her cheeks came into focus again, as did a faint, hairline scar along her jaw that curved to her chin. He refocused on her furious green eyes. “I did not take this opportunity away from you. Ty did. He was the one who contacted me, looking for investors. My presence here to execute my vision for the resort, as well as the timing of it, was at his invitation. If he let you believe your restaurant would be possible under this new vision, then he was stringing you along. He’s your enemy, not me.”
Emily blanched, but only for a split second before recovering her wits. “He wasn’t stringing me along. I’m sure he was grooming me for your takeover, knowing you’d want to step up the caliber of the resort’s dining options. He’s not my enemy. He’s the employer who gave me a chance. All I need is an open door and a budget and I will give you the restaurant of your vision.”
She’d been dead on about his sixth sense and the rush he got with each thrill of discovery. He felt that familiar rush right now while sparring with her. He couldn’t wait for her to leave so he could read her proposal. He should have eaten the damn soup. Now he’d never know what he’d missed. “You and I aren’t so different in our ambition, you know.”
She sniffed at that, feigning a nonchalance he saw right through. “You couldn’t be more wrong. I possess a patience that you clearly lack.”
Oh, this woman. She wouldn’t stop pushing his buttons. He felt heat rising on his neck. He had to stuff his hand in his pockets so he wouldn’t give in to the discomfort and tug his tie loose. Emily had no idea how much patience it had taken to wait for the right time to make his move against Ty Briscoe. Years of planning and strategy, years of positioning himself in the right business, with the right connections, silently closing in on his prey, waiting to pounce until the time was right—until the prey thought it was his idea and came to him, on the verge of bankruptcy and begging for a bailout.
“Prove it,” he heard himself say, not knowing exactly what he meant by the dare.
Her gaze was unflinching. “How?”
He had to think fast. “I’ll give you four weeks. If you can prove to me in that time that you’re as gifted a chef as you claim, then I’ll hand you the reins of the restaurant along with whatever budget you require for this . . . Subterranean.”

CREDIT: From ONE MORE TASTE by Melissa Cutler. Copyright © 2016 by the author and reprinted by permission of St. Martin's Paperbacks.