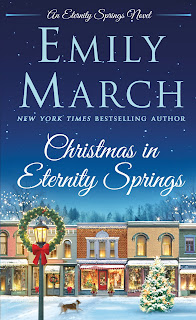 Former Navy submariner Jax Lancaster arrives in Eternity Springs to pick up his mother-less son Nicholas, who has been spending time at a therapeutic camp for kids. He runs into local shop owner Claire Branham and is intrigued by her. But he can’t pursue it any further as Jax’s life is in Seattle, even though he feels suffocated by his son’s maternal grandparents’ overprotectiveness of Nicholas. His son lost his mother in a tragic accident that has left emotional scars on him and Jax agreed initially that he should remain in Seattle where he has always lived. But after returning home to Seattle, an incident leaves Jax feeling powerless, and with the agreement of Nicholas, they move to Eternity Springs for a year. Does the fact that Claire lives there have anything to do with the move for Jax?

Claire had her own emotional upheaval and it led her to move to Eternity Springs several months ago after running into town resident “angel” Celeste Blessing, who convinced her that life there would bring peace and healing. Claire runs a Christmas store, despite the fact that there are certain aspects of the holiday that still cause painful flashbacks. Running into Jax and his son upon their return to town, she’s pleased that they’re staying for the year. She’s drawn to the little boy who has had to deal with such emotional pain, but even she has to admit it is Jax who especially intrigues her. She admires his decision to uproot his son and move to a new town to help in his recovery. Nicholas has a hard time being around anything Christmas since it was during the holidays that he lost his mother. With Claire being the town’s Christmas store owner, is it going to be difficult to have a relationship with the father of a little boy who hates the holidays?

It’s fair to be warned that reading any book in the Eternity Springs series requires a box of Kleenex nearby and CHRISTMAS IN ETERNITY SPRINGS is no exception. Claire was bullied by her now ex and she ran away to avoid him. Unfortunately, he’s still part of her life, though readers won’t know the reason why until late in this tale. She came to Eternity Springs to start over and has made many new friends. Running into Jax that summer day while he was in town to pick up his son, Claire was captivated by the man and his son, despite the fact they were going to return home soon. To her surprise, they’re soon back, living in Eternity Springs. Fate (or was it someone from above?) soon has them sharing a cabin (platonically) while hers is repaired after a fire. Claire and Jax, along with Nicholas, are living like a family. It feels so good. In fact, slowly and surely, Claire and Jax are falling in love.

Jax will do anything for his son and appreciates his in-laws help, but moving out of Seattle is the best thing for everyone. Eternity Springs will be a fresh start for both males while they get their lives back in order. Claire is a calming and wonderful person who they both like. Of course, Jax especially likes her. J The fact that Claire runs a Christmas theme store is a cause for conflict, as Nicholas still can’t stand anything Christmassy. But slowly, with Claire’s soft touch, he begins to come around. Meanwhile, as Jax settles into Eternity Springs, he wonders if there’s a way they could stay here past the designated year? But Seattle still provides a temptation, especially when a job offer comes up.

CHRISTMAS IN ETERNITY SPRINGS is an emotional tale that will pull readers into the heart-rending lives of Claire, Jax and Nicholas. This town and the people they come into contact with, especially Celeste, will provide them with healing and support—and a happily-ever after. However, it will take a few traumatic twists and turns before they can get there. If you love a feel good romance that will melt your heart, then look no further than CHRISTMAS IN ETERNITY SPRINGS.

Emily March is the New York Times, Publishers Weekly, and USA Today bestselling author of over thirty novels, including the critically acclaimed Eternity Springs series. Publishers Weekly calls March a "master of delightful banter," and her heartwarming, emotionally charged stories have been named to Best of the Year lists by Publishers Weekly, Library Journal,and Romance Writers of America.

A graduate of Texas A&M University, Emily is an avid fan of Aggie sports and her recipe for jalapeño relish has made her a tailgating legend.