Promo and Book Giveaway: THE RETURN OF THE DI SIONE WIFE – Caitlin Crews 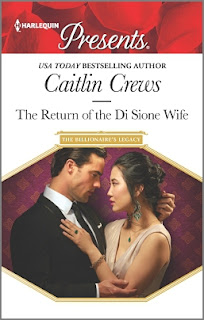 Dario Di Sione is on the island of Maui at his ailing grandfather’s request to retrieve a pair of earrings that belonged to his grandfather’s former mistress. When Dario arrives at the estate to pick them up, it is his estranged wife, Anais, who’s waiting for him. They hadn’t seen each other since he kicked her out of their apartment six years ago—when he found his twin brother coming out of their bedroom buttoning his shirt. Dario can’t stand being betrayed, and his wife had done the ultimate betrayal. But Anais is there to inform him that he has a son . . .

Anais didn’t sleep with Dario’s twin, but she can’t get him to believe her. She could have just raised their son without him ever knowing it, but felt he had the right to know he has a son. He’s skeptical at first, but after a night of seduction, he turns the tables on her by taking their son and preventing her from seeing him. Anais is distraught at what Dario has done, aware that he has enough money and power to succeed, but she plans a course of action that will bring him to his knees.  As for Dario, he soon learns there is nothing like a child wanting its mother. Is there any way that the resulting drama will bring about a reconciliation for Dario and Anais?

Dario’s lack of trust can be traced to his childhood and continued to adulthood where his own twin betrayed him with another woman while they were in college. Later, when Dario met Anais, it was an instant attraction that led to marriage vows. He was busy working, but they still managed to find time for each other. However, the night he walked into what he thought he saw, he turned his back on Anais and his twin. He never bothered to get a divorce because he thought he’d wait for her to beg for it, but to date, she never has. The moment he sees her in Maui, it’s disdain that he feels, but fiery passion still roars in his veins for her. While Dario could question the paternity of the child, deep down he knows it’s his. Now he intends to harm her as she has him by taking and keeping his son away from her.
In THE RETURN OF THE DI SIONE WIFE, a game of revenge is played with a little boy as the pawn. Anais loved Dario with all her heart, but his inability to accept her explanation as to what really happened was disheartening. Since he wouldn’t even take her calls, she hoped that one day she’d be able to tell him the news he’s a father face-to-face. It finally arrives, but even she didn’t expect Dario to kidnap their child. With calculated moves, Anais plans her own revenge. But it takes their son getting sick to finally bring them together. Will Dario give her the opportunity to show him she didn’t betray him? Is their marriage unsalvageable?

An unraveled marriage has to be repaired in THE RETURN OF THE DI SIONE WIFE, another installment in The Billionaire’s Legacy series. As someone who has not read the prior books, I can confidently say this tale can be read as a standalone with no difficulty.
An emotional family drama that will have you on the edge of your seat, grab a copy of THE RETURN OF THE DI SIONE WIFE for some entertaining reading.

Post a comment in order to be entered into a contest to win a copy of THE RETURN OF THE DI SIONE WIFE. 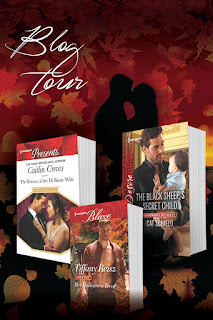 I don't think I have read any of Caitlyn's books yet. I love the Presents series.

That poor son of theirs! Sounds like quite the emotional story Caitlyn's written here!