Kathleen Mix writes stories with a thrilling mix of romance and suspense. She took an indirect route to becoming an author. After her three sons started school, she returned to college and earned a B.S. in Computer Science and Engineering. Working as a software engineer, she consulted on applications ranging from submarine combat systems to biological research databases. Weekends and vacations were always reserved for boating. And as an avid sailor and licensed charter boat captain, the itch to sail away into the sunset soon became too strong to resist. She and her husband moved aboard their sailboat and headed south. By the time they reached the Caribbean, they were hooked on a cruising life. Since then, Kathleen has spent many years roaming the U.S. coastline, exploring the Bahamas, and enjoying the tropical islands of the Caribbean and the coastal countries of South America. She began her writing career with non-fiction sailing and travel articles. But she was sailing to lush, exotic islands under starry skies and walking on the most beautiful, white-sand beaches in the world. She started imagining stories of romance and adventure and turned to writing romantic suspense. Kathleen now sails on Chesapeake Bay. But her heart remains far away in the Caribbean and the Bahamas. For her thoughts on life and books, follow her blog at http://kathleenmix.wordpress.com or to read excerpts from her books, visit her website at http://www.kathleenmix.com
Connect with Kathleen: Site | Facebook | Twitter | Goodreads
About the Book: 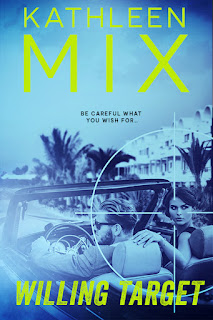 Be careful what you wish for… The last thing covert operative Mitch Weaver wants is to be partnered with a gorgeous, reckless newbie. Still reeling from the death of his former partner, Mitch doesn’t need the responsibility of keeping anyone else alive, especially when they volunteer to be a killer’s target. Not to mention, his attraction to the too-perky blonde is the kind of distraction that could get them both killed in their line of work. Andrea Carnegie’s first assignment isn’t going quite as she planned. Her partner might be sexy but he’s completely frustrating with his determination to keep her out of danger. Masquerading as a billionaire’s sister to bait a possible killer is her chance to shine. But if she wants to catch the person threatening their client, she’ll have to find a way to work together with Mitch while still keeping her distance. Even as the air between them sizzles, Andrea knows the worst possible thing she could do is fall for her partner.
Purchase: Amazon | Barnes & Noble | iTunes | Kobo
Add to Goodreads
Giveaway:

Andrea shifted impatiently in her seat. “Let’s just go out to the boat and get it over with. We can’t sit here worrying all afternoon.”

“No, but we need to keep our eyes peeled.” He spoke into his radio. “Gregory, you here and in position?”

Mitch reached for the door handle. “Okay, people. Let’s do it.”

Andrea slid out of the car and looked around as she took a step. The heel on her shoe caught on the cement curb, and her ankle twisted. She threw out her arms, struggling to keep her balance, and fumbled to catch her purse as it swung in an arc away from her body. The purse strap snapped, and the purse crashed to the pavement, opened, and the contents spilled out into the parking lot.

Swearing silently, she knelt and grabbed the container of pepper spray. Next she snatched up the dagger-like letter opener she’d brought along as a potential weapon, stuffing both items back in the purse quickly to get them out of Weaver’s sight. She gathered the tampon, comb, and Kleenex next.

Weaver made a disgusted sound, then squatted to help with the cleanup. He leaned to retrieve a rolling lipstick. The tiny hairs on the back of Andrea’s neck prickled.

She was being watched. She knew it with a certainty that made her breath stale in her chest. The malevolent vibes were strong, and her sixth sense was rarely mistaken.

She stole a quick glance around them. No one looked threatening. Could she simply be getting paranoid? Maybe her senses were overactive and the eyes she felt were just
Gregory.

Suddenly, Mitch’s head jerked up as if he had a similar inner radar and it had beeped an alert. He scanned the area, and she didn’t dare breathe.

The muscles stiffened in his shoulders. “Gun!”