MK Meredith writes single title contemporary romance promising an emotional ride on heated sheets. She believes the best route to success is to never stop learning. Her lifelong love affair with peanut butter continues. Only two things come close in the battle for her affections: gorgeous heels and maybe Gerard Butler…or was it David Gandy? Who is she kidding? Her true loves are her husband and two children who have survived her SEA's (spontaneous explosions of affection) and live to tell the tale. The Meredith's live in the D.C. area with their two large fur babies...until the next adventure calls.
Connect with MK: Site | Facebook | Twitter | Pinterest | Instagram | Goodreads
About the Book: 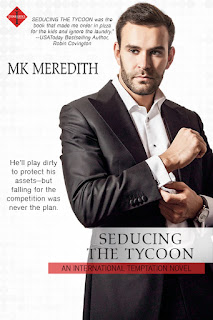 He’ll play dirty to protect his assets—but falling for the competition was never the plan. International tycoon Drago De Luca has the world at his feet and he knows it. But back home in Italy, his beloved grandmother’s family inn is on the verge of closing down for good, thanks to hotshot American heiress, Chase Huntington, and her new hotel. Drago has to protect Nonna’s inn, even if it means getting close enough to Chase to convince her she needs to leave. But the more time he spends with Chase, the more he’s drawn to her passion, her love of his culture, and the way she looks in those Louis Vuitton heels. Chase Huntington would give anything to enjoy her time with charming, sexy-as-hell Drago in the style capital of the world, but she has to make sure the new Huntington hotel opens successfully. How else can she prove she’s not just fashionista with a fortune—she’s an heiress savvy enough to take over the family’s biggest hotel back in California? But somewhere between boutiques and business plans, she falls head over Louboutins for Drago. But when Drago’s true motive for spending so much time with her comes to light, it could destroy everything Chase built and everything she thought she found in Italy.
Purchase: Amazon | Barnes & Noble | iTunes | Kobo
Add to Goodreads
Giveaway: 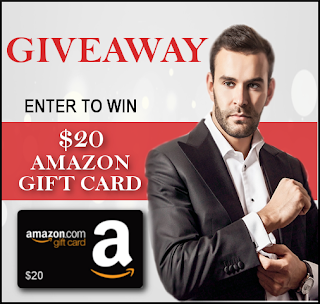 His fingers flexed in hers. “Up?”

“To my room.” If anything would ever convince her his nickname was true, it would be the look that flashed into his eyes: intense, possessive, and a little scary. She shivered as his gaze roamed over her face. He trailed his fingers up her arm and across the bare skin above her breasts. They lingered along the pulse at her neck, then he lowered his lips there.

In short time, Chase slammed her suite door closed, then grabbed the lapels of Drago’s shirt. On a heady giggle, she pressed her lips and her body against his. He was hot and hard and felt oh so right. Without warning, she found herself against the door.

He shoved his hands through her hair, grabbing her head in a firm grip that left her legs shaking beneath her. He angled his head, his lips hot and his tongue insistent.

She kissed him back, matching his intensity. She yanked up the hem of her dress, then wrapped her arms around his neck and circled his hips with her legs.

He pressed into her harder, and she moaned into his mouth. “Che figa.” His voice was deep and hoarse, sending her stomach into a slow, languorous roll.

He yanked her back from the door, and walking with her wrapped around him, found his way to her bed. “My pleasure.”

“And mine. Thank God.” She grabbed at his tie, then followed with his buttons. All the while, he found the little hidden side zipper of her dress and pulled it down her body until the garment ended up on the floor at the foot of the bed. “I have a secret,” she whispered. He shoved his pants and briefs down past his knees, then kicked them off. “Tell me.”

She had to untie her tongue first. She’d seen beautiful men, but Drago had the finest architecture she’d ever come across. His shoulders were massive, and his wide chest met with thickly muscled abs. Her eyes trailed lower, and she found it hard to swallow. “Hard” being the operative word here. Sweet Jesus.

Licking her lips, she watched his body tighten further and whispered, “I’ve had plans for you since the day I saw you lounging against the streetlamp in front of the hotel.” Her confession released something wild in him.

His dark eyes narrowed and his fingers flexed, then he was covering her from head to toe. His weight was delicious, and his heat only increased her craving. “You were checking out my shoes.” He took her mouth again, sweeping his tongue inside, sucking on her lower lip. Holding his weight partially on one arm, he ran his other large hand the length of her torso, then up and over her stomach until he gently cupped her breast.

She had enough to fill his hand, and nothing had ever felt so damn good. Her fingers found their way through his hair, then down his cheeks to his sharp jaw. His stubble tickled the pads of her fingertips and set off her senses further. Everything burned. Her lungs, her skin, her need. She spread her legs, encouraging him to settle between them. She wanted to feel him against her. There.

He pressed kisses against her mouth, then over her jaw, and said in a harsh whisper, “You’ve had plans? My plans would scare you straight back to America.”

That got her attention. She loved a challenge. “Wanna bet, love?”