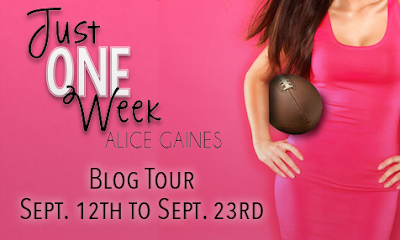 Meet Alice: Alice Gaines loves her romance hot. She’s been writing since forever and has no plans to give it up. Alice lives in the San Francisco Bay Area in a fixer-upper she never fixed up. When she’s not writing, you’ll find her knitting, crocheting, cooking, or vegetable gardening. Her main companions are her pet corn snake, Casper, and a collection of neglected orchids. She loves to hear from readers at authoralicegaines@gmail.com. You can join her newsletter at http://alicegaines.blogspot.com. She periodically gives out her handmade items to people on her mailing list. 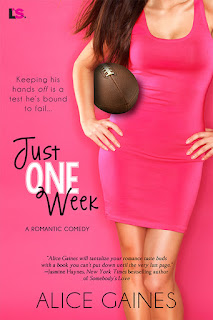 “Alice Gaines will tantalize your romance taste buds with a book you can’t put down until the very last page.” NYT bestselling author Jasmine Haynes Her brother’s best friend is not only the hottest man Michelle Dennis has ever seen, he’s the one man she hopes to avoid after leaving town eight years ago. Of course he’s the one waiting at the airport. Worse, he made sure they’re staying in the same house. Pro football player Alex Stafford is expecting to pick up his friend’s kid sister, not a full-fledged bombshell. He was planning to apologize for their past, but the feelings he had years ago come roaring back…and this time, there’s no denying them. Keeping his hands off is a test he’s bound to fail—especially when they’re stuck in close quarters. But falling in love with Michelle, living in her world, isn’t an option for a guy like him. And remembering that will save them both a lot of heartache…

Later that night, Alex found the opening he’d been looking for ever since deciding he’d surrender to the inevitable and make love to Michelle. He’d sat in his bedroom after everyone had gone to bed, digging up enough courage to go out and knock on the cottage door. Instead, he watched as she emerged into the moonlight and walked slowly toward the pasture.

An invitation? She couldn’t be sure he hadn’t gone to sleep. On the other hand, she would know that she’d be visible from his window. She could have simply taken a chance he’d realize she was out there. She’d won.

He stuck his feet into his slippers and put on his robe. Before he left the room, he grabbed the condoms and put them in his pocket. He’d need at least one tonight. Then he left his room and went downstairs as quietly as he could manage.

No sound came to indicate he’d awakened anyone. The house was silent except for the hum of the refrigerator as he let himself out the back door. A little mental geography told him the direction to go in, and before long, he spotted Michelle where she stood with her face lifted toward the moon.

She wore something of a filmy, white material that glowed in the soft light. A breeze ruffled the material around her legs. With her graceful limbs and her hair falling down her back, she resembled a character from mythology—a creature you could only find in the moonlight and could never truly call your own. Someone who’d evaporate like mist in the heat of day and only return in your dreams.

Poetic and probably silly, but real in his heart. He stepped on something that made a snapping sound. Most likely a twig. She turned and spotted him, and a smile tugged at her lips.

“Following me?” she said.

“Did you come out here to invite me to join you?”

She shrugged. “I thought you’d gone to bed.”

Yeah, sure. Everything about her smile said she’d planned this encounter to invite him into her web. But then, he’d come of his own will, needing nothing more than an opportunity.

He’d make love to Michelle Dennis tonight. As surely as the moon spilled silver light over both of them, they’d be joined before the morning came.

“You must have full moons in Massachusetts.”

Of course, their togetherness could be nothing like their earlier, innocent friendship. She’d never come to him wearing a negligee, and he’d never had condoms in his pocket. She shivered a bit, and he got up close behind her. When he opened his robe and wrapped it around her, she fit against him like pieces in a puzzle. When he bent to place the side of his face against her, the perfume of her hair surrounded him. He almost groaned out of pure pleasure.

She gave him a wicked laugh. “I can think of three or four things off the top of my head.”

“You have no idea how evil.” She turned in his arms, and now her softness pressed against him everywhere. He wouldn’t be able to hold her this way for long before he became completely aroused. The stirrings had begun when he’d first spotted her out here and the reality about what he was going to do registered.

She became even bolder, lifting her face to nuzzle the tip of her nose against his jaw. She followed that with a kiss to the underside of his chin.

“You know what’s going to happen if you keep doing that, don’t you?” he said.

“And you’re giving me permission?”