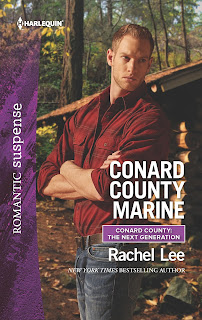 1 ) Where did you gather inspiration for Conard City?

Conard County had been rolling around in the back of my mind for some time until it emerged as the setting for Exile’s End.  Before I knew it, I was setting a second book there (Cherokee Thunder).  Interestingly, my editor called as soon as she’d finished reading the first book and asked if there would be a second.  I told her I was already working on it, and that I thought of these as my Conard County books.  And there it was.

Nothing in particular inspired it.  The town itself, Conard City, is based on a conglomeration of small towns where I’ve lived.

2) How do you think the setting affects the story?

The setting has a huge effect on the story.  Given that it is limited to one county with a low population, I can’t do just any kind of story believably.  It constrains me in some ways, but those constraints can be useful creatively.  It also allows me to have continuing characters which both my readers and I enjoy.

3) Is anything in your new release based on real life experiences or purely all imagination?

That’s a very hard question to answer.  Some emotional realities are clearly part of my life experience.  Actual events, such as amnesia, are not.  It is part of my job as a writer to vividly imagine myself in someone else’s experience.  I need to be there, to imagine it until I feel it... and I’m sometimes quite surprised by what I discover or learn.  The thing is, no matter how vivid and true my imagination is (and many have written to tell me that they’re astonished that I understand so well) I never forget that however well-realized a character is, it will not be everyone’s experience.  We are all very different but in many ways all the same.  It’s an interesting conundrum that never fails to intrigue me.

4) How long on average does it take you to write a book?

That depends on the book and other demands on my time.  Some books are more difficult.  Sometimes life needs attending as it does for everyone.  I write seven days a week when I can, but I can’t always.  So I will not say how long it takes.  It takes however long it needs.

5) What is the biggest misconception about your genre?

That it’s pure fluff.  That it’s mind candy.  Or that it’s just an excuse for titillation.  Many of us romance authors deal with very real human problems and situations.  In fact, as I’ve said before, I think of my books as a novel with a romance.

To those who scorn the genre, I suggest you look at music.  How many songs are there about love?

6) Did you hide any secrets in your books?

Not that I’m aware of, unless my subconscious played a game on me.

7) Any tips to get through the dreaded writer’s block?

Write.  Just write anything.  Two words often lead to ten, and ten into a paragraph.  It doesn’t have to be work on your book or story.  But write.  Soon the words will find you again.

I am a great Cricket fan.  I especially love One Day Internationals and Twenty-20s.  But one of the things I enjoy is the huge international participation.  I have favorite teams all over the world, and favorite players, too.  Cricket has also brought me friends from around the world.  Merely mention a team or a player’s name and you can converse with people from almost anywhere.

9) What is your favorite book and why?

J.R.R. Tolkien’s Lord of the Rings trilogy.  Tolkien had the greatest story-telling voice I’ve ever read.  His words carry you along.  Dive in anywhere to read a passage and you may emerge hours later.  He’s hypnotic, his prose lyrical, and those books will simply sweep you away.

10) What is your current end-of-summer read?

A stack of books is waiting for me.   I venture across many genres, and I read a lot of non-fiction for ideas and information.  My favorite romance authors are there, of course (I won’t name them for fear of overlooking someone I adore) and I finished the most recent Jack Reacher novel a few weeks ago.  At the moment I’m studying Practical Homicide Investigation.


The arrival of a single black rose signals danger to come for Kylie Brewer. Recovering from a brutal attack that claimed three years of her memory and her chance at a promising career, Kylie just wants to pick up the remaining fragments of her life. She returns to her hometown of Conard City to live with her sister but soon learns that putting the past in its place won't be easy.

Marine sergeant Evan Cooper—a trusted family friend who agrees to help Kylie—can't ignore his protective instincts. Or the steadily growing desire he feels for a woman who has overcome so much. He vows to help keep Kylie's demons at bay…but someone else has plans to finish what they started.

Rachel Lee is a new author for me. I can't wait to try her books!

I love her books, especially her Conard County series!!

Love marines. Thank you for the great giveaway.