An Interview with ... Liana Brooks! 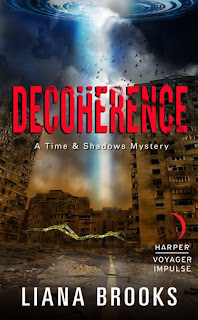 Tell us about your newest release?

DECOHERENCE is the final novel in the Time & Shadows trilogy that started with THE DAY BEFORE in 2015. The series follows CBI Agent Samantha Rose, her partner Mac, and the time travel machine created by Dr. Emir.

THE DAY BEFORE (book one) opens with Sam searching for the true identity of Jane Doe, a woman murdered and dumped on the roadside in near-future Alabama. By the end of the first book, we have Jane Doe’s real name. By the end of CONVERGENCE POINT (book two), we have a good idea why Jane Doe was killed. DECOHERENCE finishes the story.

She knows Jane Doe’s true name, but Sam never discovered who killed the woman found in an empty Alabama field in spring of 2069. She doesn’t even know which version of herself she buried under a plain headstone.

When Mac suddenly disappears, Sam realizes she is going to once more be caught up in a silent war she still doesn’t fully understand. Every step she takes to save Mac puts the world she knows at risk, and moves her one step closer to becoming the girl in the grave.

Each book has its own unique set of challenges, and for DECOHERENCE the challenge was writing the same character so she became several distinct characters. The book moves through a five-year period (and not chronologically) and we see several versions of Sam.

The Mary Sue said THE DAY BEFORE was Orphan Black-esque. That’s probably the best description. All these Sams look the same physically, but their thoughts and actions make them unique individuals. It was fun writing that, and a challenge making sure the reader would be able to see the difference between each Sam right away.

Not really. I’m at a stage in my life where I need to be very flexible if I want to get things done. I like to have a glass of water nearby while I write, earplugs or music to drown outside noise are a bonus. I prefer working in my office, but I also have a folding keyboard I keep in my purse so I can write anywhere. Over half of the first draft of DECOHERENCE was written as a series of emails to myself. I’d take kids to gymnastics, take out my folding keyboard, and write while they practiced.

I couldn’t have done this at all without the support of my loving husband and my kids. They give up a lot of Mom Time when I’m on deadline. I’ve missed family movie night because edits came in early, and skipped date night because I had a scene I couldn’t break away from. The fact that they are so supportive has gotten me this far.

And, of course, I have my beta readers and friend who have nudged me, yelled at me, and sometimes threatened me when I needed inspiration: Amy Laurens, Derek Hawkins, JC Nelson, Thea van Diepen…. Just to name a few. My fellow HarperVoyager authors who have shared this strange journey with me. They’re all so wonderful.

My extended family has no idea what to think. My siblings have nice normal careers. My brother is a baker. My sister is a dietician. I think it’s hard for them to explain that their big sister plots murder for a living.

On the other hand, my kids think it’s great. Two of my children were born after I published my first novella, so they’ve only ever known mommy as an author. They think post-it note plots on the walls are normal. They’ve always had books about poisons and serial killers on the shelves.

My seven-year-old son will sit and plot with me sometimes. He writes books about monkeys.

My fourteen-year-old daughter reads my books and does book reports on them for school. She will sneak in while I’m doing a rough draft and comment. “Mom, you can’t do that. Mom, don’t you kill Mac! Mom! Mom!”

And we talk about books at the dinner table. My family is excellent at plot twists.

I’m up in Alaska right now so, of course, I’m doing all the typical Alaskan things. Hiking is a must. I go whale watching. I do some photography and painting. I enjoy cooking. I love reading. Yoga and aerial yoga are fun (and I don’t make enough time for them).

If you follow me on Twitter you probably say a picture in August that was just a door covered in post-it notes. Every week I was adding or subtracting from this massive plot. That’s what’s next. I have several novels I’m working on; some for a serial on my blog in 2017, some for sale to the bigger markets. I have novellas coming out from Inkprint Press in early 2017.

But right now I don’t have any hard publication dates or final titles or cover art to share.

If you sign up for my newsletter or my Amazon Author Page you will get an email when these new books are released next year.


How can readers connect with you online?

I am always on Twitter. Book announcements go up on the blog as soon as I know anything. And, if you prefer FaceBook, I am there too. 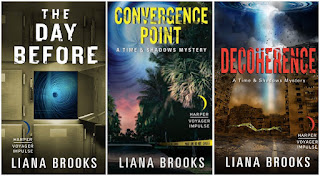 Website: www.lianabrooks.com
Twitter: https://twitter.com/LianaBrooks
Facebook: https://www.facebook.com/ByLianaBrooks/
*****
Blurb:
Readers of Blake Crouch's DARK MATTER and Wesely Chu's TIME SALVAGER will love Liana Brooks' DECOHERENCE--the thrilling, time-bending conclusion to the Time & Shadow series!
Samantha Rose and Linsey MacKenzie have established an idyllic life of married bliss in Australia, away from the Commonwealth Bureau of Investigation, away from mysterious corpses, and—most of all—away from Dr. Emir’s multiverse machine.
But Sam is a detective at heart, and even on the other side of the world, she can’t help wonder if a series of unsolved killings she reads about are related—not just to each other, but to the only unsolved case of her short career.
She knows Jane Doe’s true name, but Sam never discovered who killed the woman found in an empty Alabama field in spring of 2069. She doesn’t even know which version of herself she buried under a plain headstone.
When Mac suddenly disappears, Sam realizes she is going to once more be caught up in a silent war she still doesn’t fully understand. Every step she takes to save Mac puts the world she knows at risk, and moves her one step closer to becoming the girl in the grave.

*****
Excerpt:
“Decoherence (n): a period of time when all iterations collapse and there is only one possible reality.”
~ Excerpt from Definitions of Time by Emmanuela Pine, I1
Day 247
Year 5 of Progress
Capitol Spire
Main Continent
Iteration 17—Fan 1
… three. Rose stood and peered through the frosted, warped glass of the conference room as the speaker turned away. It didn’t matter which iteration she was in, Emir was predictable. She had seven seconds to do a head count. She didn’t need that long.
A quick head count was all it took to confirm that the einselected nodes she’d been sent to assassinate were where they belonged.
Every iteration had nodes, people or events that kept that variation of human history from collapsing. Dr. Emir had created a machine that allowed people not only to move along their own timeline, but at critical convergence points, it allowed them to cross between realities. But the Mechanism for Iteration Alignment’s greatest ability was the one that allowed Dr. Emir and Central Command to steer history by erasing futures they didn’t want.
Rose knelt beside the door, did one final sweep for alarms, and nodded for her team to move in. It was her job to cross at convergence points, kill the nodes, and collapse the futures that no one wanted.
One look at the version of herself watching this iteration’s Emir with rapt fascination was enough to make Rose want to snip this future in the bud.
Chubby was the first thing that came to mind. Rose’s doppelganger was enjoying being at the top of the social pyramid and probably gorging on whatever passed as a delicacy here. The squared bangs with a streak of riotous red only accented the corpulence and lack of self-control the inferior other had.
Even with a heavy wood door between them, Rose could hear that this iteration’s Emir was hypothesizing things the MIA was never meant to do. Everyone with half a brain knew that decoherence didn’t combine iterations, it crushed them. Only the true timeline, the Prime, would survive decoherence. Planning to welcome and integrate doppelgangers into the society was pure idiocy.
The techs sealing the door shut gave her the high sign.
Rose nodded to her hacker.
“Cameras locked. Security is deaf and blind, ma’am”Logan’s voice was a soft whisper in her earpiece. He was a genius with computer systems, a fact that had saved him when they collapsed I-38 three years ago. “We have a fifteen-minute window.”