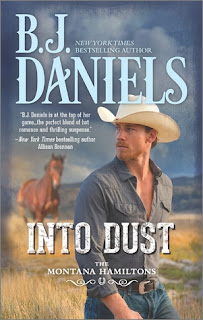 Cassidy Hamilton hates that she is in the public eye, as she’s part of the wealthy Montana Hamilton family and her father, Buck, is running for president of the United States. While visiting a friend in Dallas, a kidnapping attempt on her is foiled by a mysterious man named Jack Durand, who, it appears, will do anything to protect her. He’s tall, dark and handsome, but is he also dangerous?

Jack happened to be visiting his mother’s grave one day when he came across his father at the gravesite giving a large sum of money to a man Jack doesn’t trust. Not revealing what he’d seen, Jack follows the man, and finds kidnapping Cassidy is part of the plan. Jack intercedes and whisks her to safety. But they’re not safe yet, as they’re being chased by the man even as they attempt to elude him. Why is Cassidy being targeted?

On the run, Jack and Cassidy soon develop a friendship. He wonders why his father is involved, and breaking into his father’s office they learn a startling revelation: Jack’s father and Cassidy’s mother were involved in a long ago terrorist group. With Cassidy’s mother back with her father after a mysterious disappearance that lasted twenty some years, is this the reason for her out-of-the-blue return?

INTO DUST is the latest gripping tale in the Montana Hamiltons series by B.J. Daniels revolving around the Hamilton sisters and their father, Buck, and mother, Sarah. As the youngest, Cassidy has spent most of her life in the public eye after her father was elected to congress. As such, she has attempted to remove herself from that world, preferring to have a relatively normal life. After Jack rescues her, Cassidy isn’t sure whom to trust. She doesn’t know Jack; her mother may be a terrorist; and people want to kidnap her.Jack is shaken by the knowledge that his father may be involved in something illicit. Knowing that Cassidy may be an innocent pawn spurs him to protect her, and he’ll do anything to keep them both alive. But first, Jack needs to make sure Cassidy is safe, and that means a trip to Montana. Do they dare trust her mother, Sarah? Perhaps confronting her would help enlighten them as to what is going on. The mounting hours spent together pull them closer, leading to hot kisses. Will it soon become more?

Meanwhile in Montana, Sheriff Frank Curry gets a call from the mental institution where the woman he once thought was his daughter wants to see him. Against his better judgement, he goes to see her; there she tries to convince him she no longer plans to kill him and his wife. But Frank’s instincts tell him she is lying. As INTO DUST unfolds to the end, Frank realizes his worst fears are about to come true.

INTO DUST is number five in the Montana Hamiltons series and, to be honest, readers should read books one through four in order to understand what is going on with Sarah, Buck and the whole family. The continuing theme during the series has been Buck’s run for the presidency and the mysterious return of Sarah. She claims she can’t remember where she was for the twenty some years she was gone. Buck is wooing Sarah again, and it’s unknown if she will say yes to his marriage proposal. Sarah hasn’t told Buck that people from her murky past have been in contact with her. She is ordered by them to make sure Buck continues his campaign, or something bad will happen to her children. Is the kidnapping of Cassidy part of the evil plan?Things are tense and move along fairly quickly in INTO DUST. Readers will be trying to guess what happens next and as to exactly what is the goal of the evil group. Along the way, Cassidy and Jack fall in love, but will everything end smoothly for them? Not to give away spoilers, but even I didn’t foresee the bit of a twist ending. The final book in the series is due out later this year, and will all the unanswered questions finally be answered?

A gripping, suspenseful tale you won’t want to miss, grab a copy of INTO DUST to indulge your love for an intense romantic suspense.

I have received two copies of INTO DUST as giveaways.
Post a comment and two winners will be announced later on.
Open to US mailing addresses only.

Sounds like a good story. Thanks for the giveaway!

I enjoy this author. Good luck to all

I've only read one BJ Daniels book but I loved it and would like to try more. I'm a huge fan of Western romances :)

Thanks for the awesome giveaway! I'm a big fan of her books.