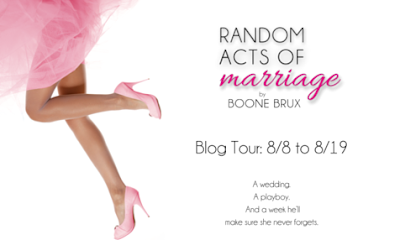 Boone's stories range from high fantasy to contemporary romance. Having lived all over the world, and finally settling in the icy region of Alaska, she's always looking for the next adventure. It's not unusual to find Boone traversing the remotest parts of the Alaskan bush, gathering information for her stories. No person or escapade is off limits when it comes to weaving real life experiences into her books or blogs.
Connect with Boone: Site | Newsletter | Facebook | Twitter | Goodreads 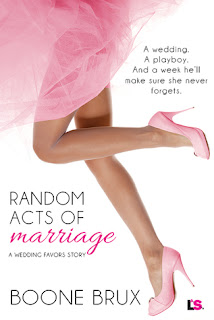 A wedding. A playboy. And a week he’ll make sure she never forgets.
Kinni Corbet is the perfect bridesmaid. She’s efficient and has a to-do list for every occasion. When the bride-to-be adds “relax and have some fun” to Kinni’s schedule, Price Lyons seems to tick all the right boxes. He’s guaranteed fun, and it’s only for one week—what can it hurt?
Playboy hotel owner Price Lyons has wanted to break down Kinni’s walls for years. Her plan to relax for a whole week is the perfect opportunity to get to the one person he’s never been able to charm. And this time, she seems…receptive to his advances. Unexpected, but he’ll take it.
There’s just one problem. Kinni’s allergic to spontaneity, and the only thing predictable about Price is his unpredictably. There’s no way they’ll last beyond the week, and Kinni’s going to make sure of it…
Purchase: Amazon | Barnes & Noble | iTunes | Kobo
Add to Goodreads


Excerpt
When he finally pulled up to the house, she stared out the window while slowly unbuckling her seat belt. Giving her time to adjust to her mistake of thinking he’d been born a rich kid, he got out of the car and moved to open the passenger door. “We’re here.”

“This is where your parents live?” She swung her legs over the edge of the seat, causing the bottom of her dress to inch upward and reveal a lot of flawless porcelain thigh.

“Yep.” He forced his eyes to remain on her face. “I grew up in this house.” Still not giving in to the urge to ogle her long legs, he offered her his hand. “Tons of great memories.”

“It’s a lot smaller than I imagined it would be.” She stood and smoothed her skirt.

“Really?” A smirk quirked his upper lip, his amusement now tainting his question. “What had you imagined?” He knew exactly what she’d thought, but couldn’t resist putting her on the spot.

Her brow arched, and her eyes slid in his direction. “Is this why you were so adamant that I come? To prove me wrong?”

“Not prove you wrong.” The slight possibility that she’d climb back into the car and demand to leave flittered through his mind. He tugged her forward and closed the passenger door. “I just wanted to share my humble roots with you.”

Instead of the flippant response he normally received from most women when he told them he wasn’t from money, Kinni pulled to a stop and turned to him. “You really wanted to share this with me? Not just rub it in my face?”

Until that moment, he’d been coasting along, having fun with Roxy’s wedding favors and the prospect of Kinni getting to know him better, but the way she looked at him, her huge brown eyes searching his face as if hungry to hear that somebody wanted to spend time with her, suddenly made the situation less funny and far too real. “Yeah, I really want to share it.” He reached out and rubbed her upper arms, trying to add weight to his confession. “Listen, we’ve been running with the same crowd for years and yet I don’t feel like we’ve gotten to know each other. I thought this might be our chance to do that. Things are going to change, and I’m sure Roxy and Kyle won’t be the last of us to get married.” He lowered his hands. “I don’t want the gang to drift apart, and…I like you.”

“Really?” She crossed her arms over her chest. “After one day together you know this?”

“One day? We might have only hung out together because of our mutual friends, but we’ve known each other for years.” He reached out and tugged her hand free, locking fingers with her. “And I’ve always liked you.” His smile widened, and he pursed his lips for a second. “But I don’t think the same can be said about you.” She opened her mouth to argue, but he held up his hand, stopping her. “It’s okay. Why don’t we let today be a new start for our friendship?”

Her chocolate gaze held his for a few seconds before she nodded. “I like that idea.”