Spotlight on.... JILL MANSELL with giveaway 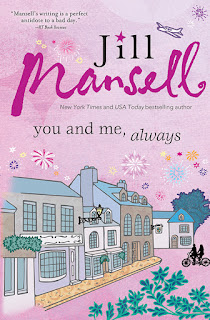 Nothing stays secret forever, least of all love…

On the morning of her twenty-fifth birthday, Lily Harper opens the very last letter written to her by her beloved mother, who died when she was eight. Learning about the first and only real love of her mom’s life is a revelation.

The same momentous day, Lily meets Eddie Tessler, an actor fleeing fame who could change her world in unimaginable ways. But her childhood friend Dan has his own reasons for not wanting Lily to get too carried away by Eddie’s attentions.

As secrets past and present begin to emerge, Lily’s not sure what—or who—to believe. But one thing is clear: in the beautiful Cotswold village of Stanton Langley, nothing will ever be the same again…

With over ten million copies sold, New York Times and USA Today bestselling author Jill Mansell writes irresistible, funny, poignant, and romantic tales for women in the tradition of Marian Keyes, Sophie Kinsella, and Jojo Moyes. She lives with her partner and their children in Bristol, England.

(see contest info at the end of this post)

With over ten million copies sold, New York Times and USA Today bestselling author Jill Mansell writes irresistible, funny, poignant, and romantic tales for women in the tradition of Marian Keyes, Sophie Kinsella, and Jojo Moyes. She lives with her partner and their children in Bristol, England.

THE ONE YOU REALLY WANT (link to book)

One comment per poster and you must reside in the USA or Canada. Thanks.
at July 10, 2016

LOL that excerpt was fun! I would really enjoy this book.

Thanks for the giveaway.

I love British authors and this looks like the perfect summer read that I'd love!

I have not had the opportunity to read one of Jill's books yet.. Looking forward to it.