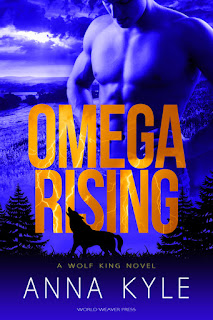 Omega Rising is a paranormal romance filled with sexy shapeshifters and magic and murder. Cass Nolan is a sleep-deprived, overworked stable owner whose life is upended after Nathan Rivers arrives at the barn one day looking for work. He isn’t what he says he is but that’s cool, because neither is she.  Cass knows what she wants and that is the sexy wolf who is determined to keep his distance.

What was one of the most surprising things you learned creating your story?

I learned that when you type The End on a first draft, you’ve only just begun. My first draft of Omega Rising is very different from the published book. Chapters are gone, characters are combined, names are changed, even the ending is different – all necessary revisions to make the story stronger. As a journalist my words would be tweaked by an editor. Fiction, well, that is a whole other beast. And I love the ending now.

Not really. I grab my coffee, turn on some music, sit at the computer, and write (or on bad days, I stare, mess around on Twitter, get more coffee, walk around). My music choices reflect the mood of the scene I’m writing at the time.

What authors influenced you in helping you become a writer?

That’s hard to narrow down! My first visceral response to a book was The Black Stallion by Walter Farley. I was a kid but got goose bumps, the pounding heart, the works. That reading a book could that…wow, just wow. My mom had the whole series in a box in the basement. Read them all. In romance novels, I think Nora Roberts has some of the smartest, sensible characters in romance. No manufactured angst. I love that. Shelly Laurentson is laugh out loud funny. You can’t beat Johanna Lindsay for historicals or Daphne Du Maurier for fantastic atmospheric writing so rich you can taste it. I have lots of favorite books that I reread, depending on my mood. Stephen King’s The Stand or Robin Hobb’s Fitz and the Fool series when I want to be engrossed in an epic story, Johanna Lindsey anything when I want to revisit a well-loved romance, Diana Gabaldon’s Outlander because it blew my mind when I read it years ago and I still love it. Oh, I also wrecked my paperback of Watership Down from repeated readings and had to buy the hardcover.

They are excited and proud. My dad isn’t a big reader but he’s really happy for me. My mom, if she were still here, would be over the moon for me. She passed down her voracious reader gene to all of us kids and some of her grandkids.

I have a horse I adore and try to get out to the barn as often as I can. I’m a big reader, as you might guess. Weeding the garden has a therapeutic effect on me that cleaning the house just does not, so guess which one I do more? I have a big backyard and I enjoy hosting summer holiday parties. I also love music and dancing.

For the next six months I’ll be finishing up Book Three of the Wolf King series in addition to a magical romance trilogy. It’s the best kind of busy!

I’m really active on Twitter (Anna Kyle @SandsOfTime5050) and I have a website (annakyle.com) that I blog on regularly.

BIO:
Anna Kyle wrote her first story at age 12 on an old manual typewriter, and though the technology

has changed, she hasn’t stopped since. She lives in the Midwest surrounded by family and friends and dogs and horses. They’ve forgiven her (mostly) when they appear in her stories. She reads everything she can get her hands on, but romances, especially paranormals, are her favorite. Vampires, humans, Fae, shapeshifters, or demons, it doesn’t matter—Anna’s heart goes pitter-pat for the Happily Ever After. Hot heroes + strong, funny heroines = awesome.

Omega Rising is available in trade paperback and ebook via Amazon.com, Barnesandnoble.com, Books-a-Million, Kobo, World Weaver Press, iBookstore, IndieBound and OmniLit, and for wholesale through Ingram.


EXCERPT:
He gestured toward the desk again, his eyebrows lifting at her obvious reluctance. Well it could only take a few seconds or so to place a bandage and he smelled so damn good. She settled herself on the desk and held out her hand. He was so close she imagined she could feel the heat of his body warming her skin. His thumb smoothed the edges of the criss-cross bandage while his other hand held hers loosely. Cass tensed, ready to yank her hand away. Nathan looked at her, questioning, she guessed, how she got the scrape.
“Misjudged the wall.” Her voice was unsteady as she tried to ignore the shooting tingly little sparks fanning out from his touch. His large tanned hand enveloped hers loosely, turning it over to trace her palm. Cass’s apprehension grew and she braced for the inevitable burn, her brain automatically rifling through the best maneuvers to pull herself free. The clunky phone on her desk could be a weapon and the letter opener was lying within easy distance. A bonk on the head or stab in the throat, if her gut had massively misjudged his character, would gain her freedom.
His hold didn’t tighten. Five seconds, ten, still nothing. Fifteen, twenty. She wanted him to let go yet clung to the warmth and texture of his skin. Her breath came faster but it wasn’t nerves alone. His finger traced a small cut on the pad of her ring finger and he looked up again.
“Pa-paper cut.” He grabbed an antiseptic square, tore it open with his teeth to keep his hold on her hand. Soon that cut was cleaned and covered. Her insides shivered as his hand glided over her forearm, pushing up the sleeve of her hoodie. Her skin soaked in the roughness of his palm and reached for the heat in his touch. Ninety seconds. She stared at his large, tanned hand stroking her pale forearm, the pure pleasure of it making her light-headed.
“You’re trembling,” he murmured as he continued his exploration, finding a larger angry red line with bruising around it. He traced it gently.
“Mr. Clean,” Cass said, her voice husky. “He’s an asshole.”
Nathan chuckled, the sound raspy as if he hadn’t found much amusing for a long time. Cass stared, transfixed. He was already the best looking man she’d ever seen, but with the smile softening his features for a moment he was devastating, the crinkles at the corner of his eyes positively kissable. Her heart flipped in her chest.
He pressed his lips against her palm, taking a deep, ragged breath. His nose and lips were hot and she waited, quivering in anticipation.