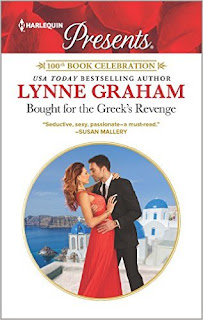 Every writer has a different process, but for me one of the most important parts of creating a story is where I do it. I have a room in my house that is solely mine. I fill it with all the things that inspire me. It has hundreds of books, maps, guides to far flung places where I set my romances. But it’s very much a working room.

I start writing at 9.00 am and work on through to 5.00pm. The only members of the family allowed in to my writing room are my three dogs. They curl up underneath my desk and keep me company. Most of the time they behave! Occasionally if I’m stuck on a plot, then I’ll take them for a walk and by the time I’m back in my room, all the kinks are magically resolved.

At Christmas my writing room has its own Christmas tree that is full of bright pink decorations – these are the ones that are full of glitter, sparkle and feathers. (Both me and my husband agree that it’s the best place for them!) I have candles that cover every surface, and fairy lights around the fire place. It’s the coziest, most beautiful room in the house!

It also contains my collections. I like collecting small frog figurines – if they have crowns! I also like stone animal figures. I have to keep an eye on what I collect, because if I don’t they’ll get out of hand and I’d be buried under small animals rather than the beautiful worlds of faraway places, and brooding heroes and innocent heroines. 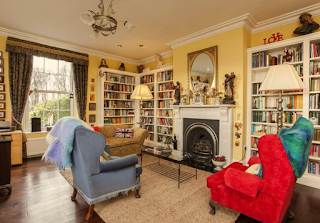 I also have a house in France. It’s a beautiful rural cottage near Eauze in the Gers region. It’s filled with bookshelves, just like my house in Belfast and is an absolute delight and inspiration to write in.

POST A COMMENT TO BE ENTERED INTO A CHANCE TO WIN A COPY OF BOUGHT FOR THE GREEK'S REVENGE.

Note: This is Lynne Graham’s 100th book in the Presents line

Greek billionaire Nikolai Drakos is out for revenge and virginal Ella Palmer may be the ultimate payback to the man he hates. Years ago, fellow businessman Cyrus Makris raped Nikolai’s sister, and it ultimately led her to commit suicide. Nikolai has heard that Cyrus has set his sights on marrying Ella and he plans to circumvent those plans by bedding her himself. Using the fact that her father is being forced into bankruptcy, Nikolai offers to dissolve the debts if Ella becomes his mistress. There’s already a history between them as they had a run in a couple of years ago and he never forgot her. But Ella won’t be forced to give her body to any man, and demands that Nikolai marry her first.

Despite her demands, Ella doesn’t really have much to say in the matter, so she grudgingly agrees to the offer. Off to London they go, where Nikolai surprisingly keeps her at arm’s length…until that one, fateful day when the passion explodes between them. He hadn’t believed her claims that she was a virgin, but now he does and he has to do the right thing. A wedding is planned, but will they make it to the altar since many plans of revenge eventually go awry?

Nikolai is the ultimate Greek alpha hero as he starts out thinking no woman can control him, but in the end he has to grovel at Ella’s feet for forgiveness. He knew from the moment they interacted there would be fiery passion between them, but she rebuffed him. He’s not about to beg (at this point in the book, anyway) and walks away. Now he has the chance for some revenge—and get the woman he’s seriously lusted for a couple of years into his bed. Nikolai is strong and sexy, even as readers will start out hissing at his overbearing attitude. But Ella is the perfect woman to put him squarely into his place.

Ella has put her plans to attend veterinary school aside as her father became seriously ill, and then could not maintain his business. Losing their family home was the final straw, and Ella will do anything to help her father and her beloved grandma continue to live there. Even going to bed with the devil himself? She senses there is a deeper, sensual man beneath the hard exterior, and even the promise of passionate lovemaking doesn’t scare her. She revels in her power to make Nikolai want her. Will love soon come to them?

Sexy and passionate. Yes, just what I expect - and, most importantly, enjoy - from Lynne's books. Thanks for sharing!

That is such a gorgeous room. Anyone would be lucky to write or read in it! Thanks for sharing your new book, Lynne! Can't wait to pick it up.